Add an Event
Newswire
Calendar
Features
Home
Donate
From the Open-Publishing Calendar
From the Open-Publishing Newswire
Indybay Feature
Publish to Newswire
Add an Event
Related Categories: Government & Elections
Mark Zuckerberg is a Rich Jerk
by Dean Baker via Common Dreams
Tuesday Jan 14th, 2020 10:41 AM
Zuckerberg is not a political philosopher concerned about the public good. There is a zero evidence he is a deep thinker of any sort.
Reprinted here under Creative Commons License. 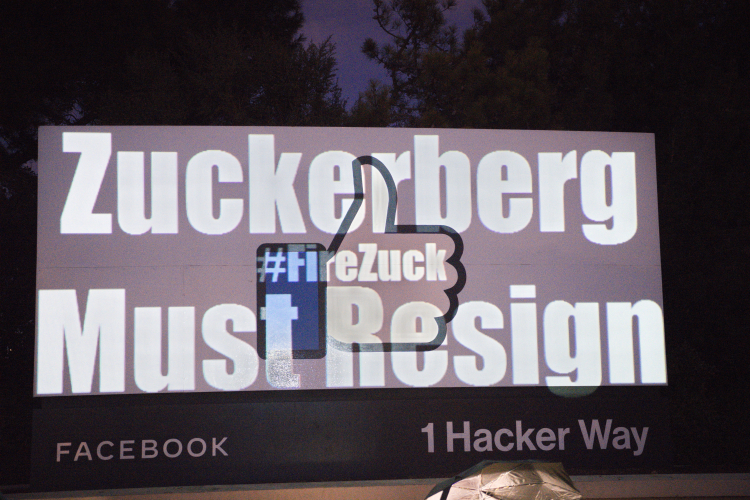 original image (3453x2300)
It is bizarre that so many people look to the country’s billionaires to tell us how the world should be constructed or think that these people have any great insight into such matters. Being a billionaire means that you were successful at getting very rich. There is no reason to believe that billionaires have any more insight into major policy issues than anyone else.

Imagine if we turned to LeBron James, a truly great basketball player, to get advice on how best to deal with global warming. LeBron is a smart guy, but no one would expect him to have special insights into dealing with global warming, in spite of his incredible skills on the basketball court.

In the same vein, why would anyone think that Zuckerberg would know or care about how Facebook should be run in a way that protects democracy? Zuckerberg runs Facebook to make to make money (lots of it), not to promote democracy. The way to fix the problems of Facebook is not to convince Zuckerberg of its harms, the way to fix Facebook is to change the law.

The best way to address the immediate issue of concern with Facebook, that it will run political ads with lies, is simply to remove Facebook’s exemption from libel law. In the early days of the Internet, Congress passed the Communications Decency Act, which established rules for Internet. The law included a provision, Section 230, which exempted intermediaries like Facebook from libel. This provision means that Facebook, unlike the New York Times or CNN, cannot be sued if it transmits false and damaging claims about individuals, companies, or other entities.

It is difficult to see why Facebook, or any Internet intermediary, should enjoy this sort of special treatment. Zuckerberg has said that he doesn’t want to be in the business of determining what is true. It may be the case that his Facebook team is not terribly competent, but the fact is that his competitors in traditional media have been in this business for decades.

I cannot buy an ad in the New York Times or on CNN attacking Donald Trump, Joe Biden, or any other political figure unless I can demonstrate to them that the claims in the ad are true. This is partly because these companies are worried about their reputations, and don’t want to be associated with passing along lies, but also because they could be subject to a libel suit if they helped me pass along libelous claims.

Zuckerberg might argue that Facebook’s operations are highly automated, people can buy ads on Facebook without any human intervention. This means that it doesn’t have staff available to review all the ads that it runs. That is undoubtedly true, but that is Mark Zuckerberg’s problem. Just as the New York Times and CNN pay people to review the ads they run, Facebook can pay to review the ads it runs. That will cost lots of money and reduce Facebook’s profits, but so what?

It is worth noting the contrast in the treatment of copyrights and libelous material by Facebook. In accordance with the law, Facebook polices its site for copyright violations. If someone has posted material that has been identified to Facebook as infringing on a copyright, Facebook will remove it from any sites where it has been posted. By contrast, Mark Zuckerberg says Facebook doesn’t care if posted material can be shown to be false and libelous.

It is hard to see an argument as to why we should not be at least as concerned about protecting democracy as protecting copyright holders’ ability to make money from their copyrights. It may be too much to demand that Facebook preemptively review posts for libelous material, but as with copyright infringement, they can be required to remove material that has been demonstrated to be false and damaging.

The law can also require that Facebook take steps to correct the damage from any false and libelous posts. This could mean that it would post a correction to the material that would appear on any Facebook pages where the libelous material appeared.

Allowing for such corrections could be one of the items that Facebook includes in those “terms of service” that no one ever reads. If people object to the idea that they may having a correction to their libelous posting appear on their Facebook page, then they can opt not to use Facebook. (Consumer choice is great.)

Facebook and other Internet intermediaries often try to portray themselves as passive actors, like a bulletin board on the web. There are in fact many such passive bulletin board type sites on the web. The difference between these sites and Facebook, is that these sites don’t make money from advertising or their participants’ personal information. If Facebook wanted to go that route, then it could be exempted from responsibility for libelous material, just as a neighborhood bulletin board would not be held responsible for libelous material.

However, if Facebook wants to compete with print and broadcast outlets for advertising dollars, it should be held to the same rules as these outlets. There is no justification for special treatment for rich jerks from Harvard. There is no reason to waste any effort trying to convince Mark Zuckerberg what is good for democracy. We just have to tell him, and make him a pay a very big price if he is too lazy or dumb to “get” it. 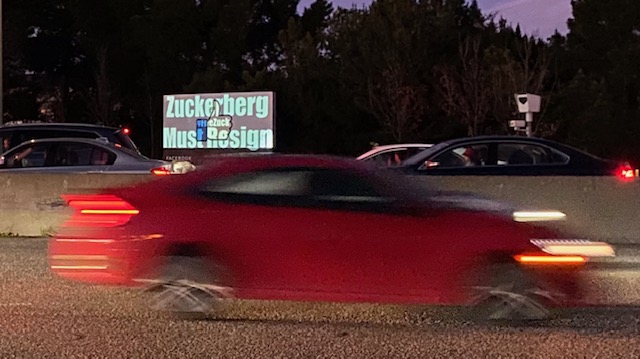 use this photo freely from Jan 9 protest at FB in Menlo Park.
Add Your Comments
LATEST COMMENTS ABOUT THIS ARTICLE
Listed below are the latest comments about this post.
These comments are submitted anonymously by website visitors.