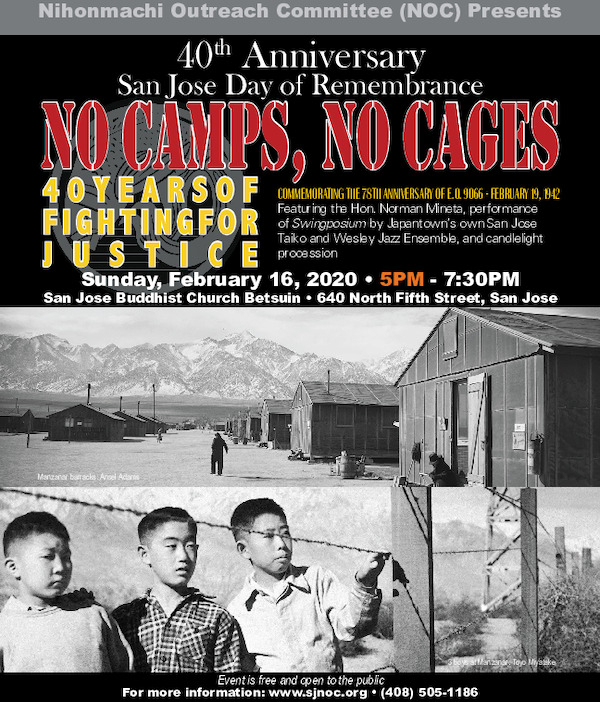 The 40th Anniversary San Jose Day of Remembrance event commemorates the anniversary of the signing of Executive Order 9066. The order, signed on February 19, 1942, led to the forced removal and incarceration of 120,000 people of Japanese descent during World War II. Hundreds of people will gather together at this annual event not only to remember that great civil liberties tragedy but also to reflect on the rising tensions that are building within our communities today.

The 2020 San Jose Day of Remembrance event will feature the return of Japantown's native son, the Honorable Norman Y. Mineta to the program and will be kicked off with a special music and dance collaboration from San Jose Taiko and the Wesley Jazz Ensemble.

The 2020 event carries the theme "No Camps, No Cages." During the past few years, the story of Japanese American incarceration has intersected with several national stories including Justice Sonia Sotomayor's scathing dissent in Trump v. Hawaii to migrant detention centers.

"I cannot for a moment imagine what my childhood would have been like had I been thrown into a camp without my parents. That this is happening today fills me with both rage and grief: rage toward a failed political leadership who appear to have lost even their most basic humanity, and a profound grief for the families affected."-- George Takei, actor and activist

END_OF_DOCUMENT_TOKEN_TO_BE_REPLACED
Added to the calendar on Fri, Jan 10, 2020 10:50AM
Add Your Comments
Support Independent Media
We are 100% volunteer and depend on your participation to sustain our efforts!