Newswire
Calendar
Features
Home
Donate
From the Open-Publishing Calendar
From the Open-Publishing Newswire
Indybay Feature
Publish to Newswire
Add an Event
Related Categories: U.S. | Anti-War
Urgent Call For Action Against A U.S. War On Iran
by Democratic Socialists of America
Saturday Jan 4th, 2020 10:55 AM
Democratic Socialists of America (DSA) emphatically opposes a U.S. war with Iran. In light of the U.S.’s act of war against Iran, putting the two nations close to the brink of war, DSA calls on all members and chapters to mobilize against yet another U.S. war in the Middle East. 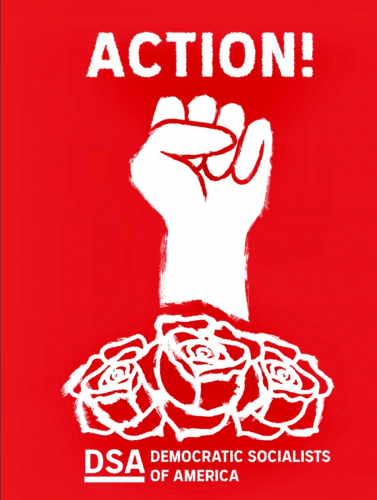 original image (949x1258)
On January 2, 2020, the U.S. military assassinated, on Iraqi soil, Iranian General Qassim Suleimani. Such a move is an act of war, and escalates an already tense military situation in Iraq and Iran. In addition to recklessly endangering millions of lives throughout the Middle East, yesterday’s action violates the War Powers Act, the U.S. Constitution, and international law.

These strikes come on the heels of an increased military presence in Iraq, part of decades of military intervention in the country. Even prior to its illegal, criminal invasion and subsequent occupation of Iraq in 2003, the U.S. was bombing the nation an average of once every three days and imposing brutal sanctions on it.

The U.S. has long held Iran in its sights since it broke free of despotic rule under the U.S-backed Shah. Donald Trump and his cabinet of war hawks have dramatically escalated military tensions to their highest point in decades. Trump unilaterally pulled out of the Iran Nuclear Agreement, in spite of Iran’s compliance with it. Trump has reimplemented brutal, unilateral sanctions against Iran that are inflicting real suffering on Iranian civilians in no way responsible for the policies of their government. In June, Donald Trump claims to have ordered, but called off, strikes against Iran, after the U.S. alleged the Iranian military shot down a U.S. military surveillance drone. Tensions were further inflamed in September when Saudi Arabia accused Iran of attacking a Saudi oil field.

A U.S. war against Iran would be catastrophic. U.S. wars in the Middle East have left a bloody legacy, killing over a million people. This new conflict would endanger the lives of millions of Iranians, Iraqis, and others throughout the Middle East, potentially creating a near continuous warzone from Lebanon to Afghanistan. As internationalists we stand in solidarity with the people of the Middle East, from the streets of Baghdad to Beirut, in their struggles for liberation and against the scourge of war.

As Democratic Socialists, we reject further war, imperialism and militarism by our government. We oppose a war against Iran, call for the lifting of sanctions, the rejoining of the Iran Nuclear deal, and the removal of U.S. troops from Iraq. We encourage DSA members to find a protest action near them to engage in.
https://www.dsausa.org/statements/urgent-c...
Add Your Comments
Support Independent Media