Monterey Protest: No War on Iran! U.S. Out of Iraq! 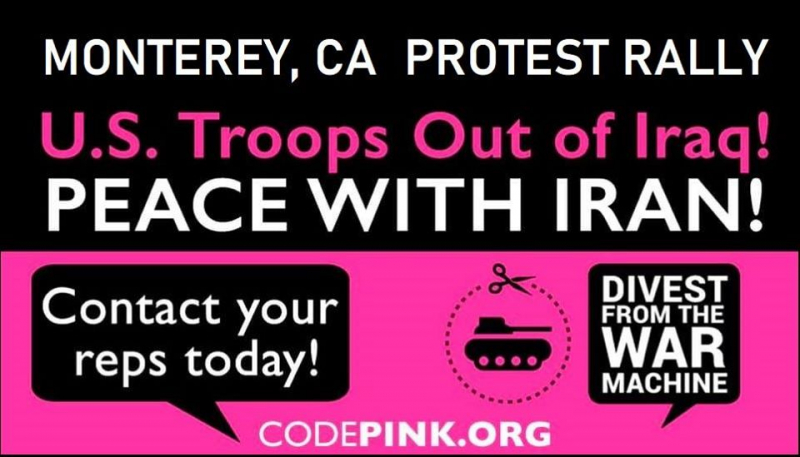 Protest at Window on the Bay in Monterey to demand:

NO MORE U.S. TROOPS IN IRAQ AND THE MIDDLE EAST!
U.S. OUT OF IRAQ NOW!
NO WAR - NO SANCTIONS ON IRAN!

For all who believe in peace, for all who are opposed to yet another catastrophic war, now is the time to take action. On Saturday, January 4 in cities across the country there will be protests against a new war in the Middle East and calling for the withdrawal of all U.S. troops and bases in the region and a halt to the dangerous escalation of the conflict with Iran.

Come for as long as you can. Bring a sign to hold or use one that MPJC and PCMC will provide.

Background: The Trump administration and Pentagon have moved to start a war with Iran by assassinating Qassem Soleimani, the top military leader of that country. If Iran openly assassinated a top U.S. general and bragged about it, there is no question that the United States would initiate full scale war. Trump and the Pentagon have acted illegally, in violation of the Constitution, the War Powers Act and international law.

Read more and take action at:

END_OF_DOCUMENT_TOKEN_TO_BE_REPLACED
Added to the calendar on Fri, Jan 3, 2020 9:35PM
Add Your Comments
Support Independent Media
We are 100% volunteer and depend on your participation to sustain our efforts!