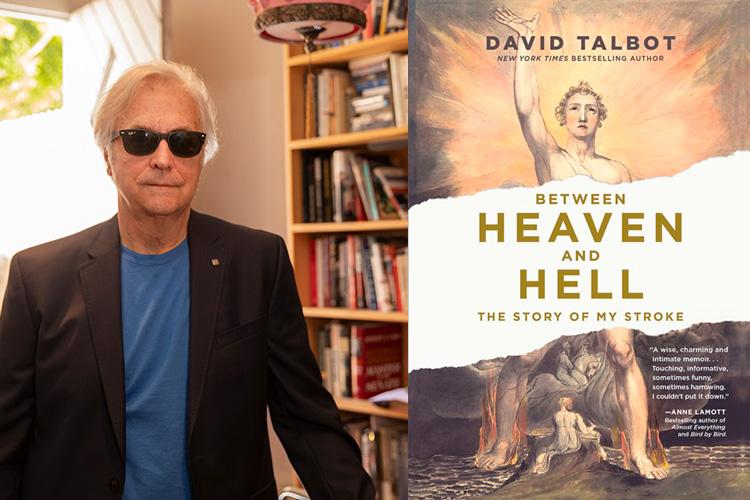 In short chapters that had their genesis on Facebook, Talbot recounts a year of recovery, upheaval, and transformation following the stroke that almost killed him. He also reflects on the pace of the stress-filled career that brought him to this precipice, in his mid-60s, while he was still trying to navigate his way through considerable Hollywood challenges in attempting to bring his books to the screen. As the hard-charging CEO and editor-in-chief of Salon, he championed progressive investigative journalism at a time when the industry was heading toward a financial abyss. “I believed then that Salon was worth dying for. We were caught up in history’s hurricane,” he writes. “My stroke did not just change my life,” he writes. “It saved my life.”

By necessity, he slowed down, he lost a lot of weight, and he pared his existence down to the essentials and became focused on what really matters. He made his peace with death and learned to “live each moment like it’s your last." These are the sort of sentiments upon which countless self-help books are constructed, but Talbot demonstrates the conviction of someone who has been there and back and now knows what is really at stake.

In his signature voice and with powerful storytelling, Talbot examines the physical, emotional, and psychological impact his stroke has had on his identity. Along the way Talbot offers readers insider stories on the wild early days of Internet journalism, insights into the new tech culture, the down and dirty of Hollywood, and much more. This is an illuminating, often humorous, portrait of how a health crisis can truly shift one's perspective on life and purpose.

“A deeply affecting examination of mortality, ambition, and the priorities of a man who dodged death to live better days.”
—Dave Eggers, bestselling author of The Circle, Zeitoun, and A Heartbreaking Work of Staggering Genius

“What makes this book so special is the complete absence of resentment and self-pity. This is a story beyond catharsis—it’s a rebirth, a celebration, a hallucinatory and joyous examination of the aftermath of illness with love and gratitude infused on every page.”
—Susannah Cahalan, author of Brain on Fire and The Great Pretender

Event begins at 7pm, doors 6:30.
END_OF_DOCUMENT_TOKEN_TO_BE_REPLACED
Added to the calendar on Thu, Jan 2, 2020 7:54PM
Related Categories: San Francisco | Arts + Action
Add Your Comments
Support Independent Media
We are 100% volunteer and depend on your participation to sustain our efforts!