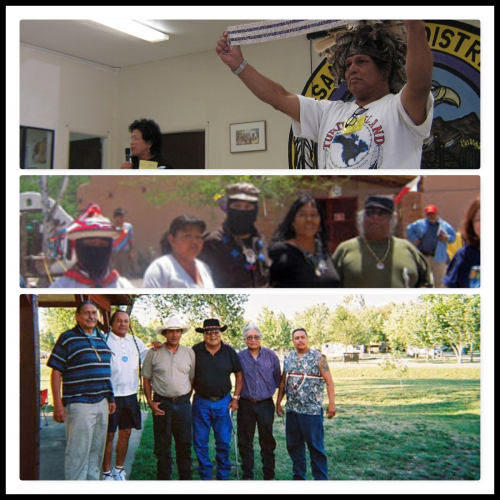 Even after being blacklisted in the news industry for 13 years, I am still surprised that the mainstream media, along with much of the media in Indian country, refuse to cover the most important issues.

For too many reporters, news coverage is what is convenient. It is what can be stolen and rewritten with a phone call, or coverage of what is happening near the reporter's easy chair. It is sad to see that even the alternative media is on easy street, with so little interest in truth, or concern about the reality of these times we live in.

On the serious issues such as coal mining, power plants, uranium mining and the poisoning of water, just think what a difference it would make for the present, and the future of mankind, if there were serious investigative reporters living on the land, present with the land and people, free from the burden of unconcerned editors and the control of politicians and advertisers -- free to write the truth, revealing both accurate history and the impacts for future generations.

In the mid-1990s, Tim Giago, Lakota, created Indian Country Today Southwest. Our office was in Scottsdale, Arizona, and from there we went out into Indian country.

In those years, our editor Avis Little Eagle shook up the ceremony profiteers with an explosive series on wannabes.

Meanwhile, we covered everything from Big Mountain to the Zapatistas.

I'll always be thankful to Tim Giago and Avis Little Eagle for those times of uncensored reporting, which included my first trip to travel with the Zapatistas in the mountains and jungles of Chiapas. It was raw coverage and didn't come without serious death threats.

This shouldn't be considered "old school" reporting, it should be considered mandatory reporting -- to be present and dive into the most pressing issues.

The death threats were linked to corporations. This was when we were just beginning to realize the extent that corporations and the US government would go to, in order to keep their billions flowing in, especially in regards to coal mining, power plants, uranium mining, logging, and the US-controlled drug running and secret landing strips in southern Arizona.

Today, everything is monitored, everything online is tracked and recorded. Today, there are drones overhead for surveillance, and snipers are ready to kill peaceful land defenders, in North America.

In Central and South America, the corporations and government agents kill with impunity anyone who gets in their way.

The lackluster reporting and fear that reporters have today place future generations at risk. Nothing less than a revolution of writers, from the ground up, will make a difference.

Note: Indian Country Today was eventually sold. As a staff reporter, I was censored, then terminated in 2006. I created Censored News, a collective of writers, photographers and broadcasters focused on Indigenous Peoples and human rights. Our links have been censored by Twitter since 2016.

Brenda Norrell was a working news reporter for 24 years before being blacklisted. Norrell began at Navajo Times in 1982. She worked for The Associated Press and USA Today as a stringer for many years, along with local newspapers, during the 18 years that she lived on the Navajo Nation. For the majority of the years between 1995 and 2006, she was a staff reporter for Indian Country Today, covering the west and Mexico. She has written for magazines, including Outside, with coverage of the Earth First! trial. As volunteers, Govinda Dalton and Norrell have broadcast live, including on the Longest Walk coast to coast, and throughout Indian country in the U.S., Bolivia and Mexico, since 2006.
https://bsnorrell.blogspot.com/
Add Your Comments
Support Independent Media
We are 100% volunteer and depend on your participation to sustain our efforts!