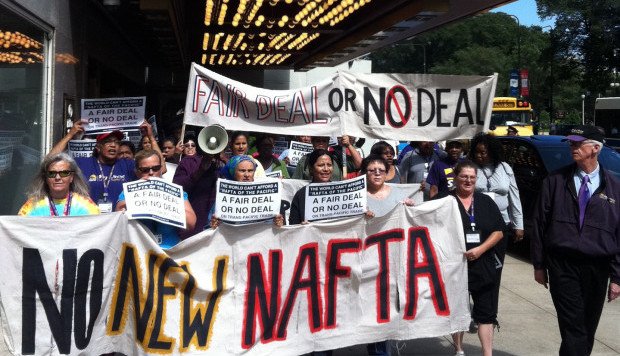 
Congress recently passed the United States, Mexico Canada treaty USMCA known as NAFTA 2.0. It will allow continued outsourcing, privatization, and deregulation of labor and environmental standards. It will not stop the outsourcing of US jobs to non-union and slave labor conditions at Mexican plants.

Mexico under NAFTA has privatized the ejidos, railroads, telecom, mines, and part of the oil industry. Their agriculture has also been destroyed by the mass importation of US subsidized

corn, corn syrup, and Walmarts which have wiped out large parts of their economy.

The agreement continues to allow US oil and gas companies to continue to drill and take over the resources in Mexican while having no climate protections for Mexico, the US or Canada. It also prohibits Mexico from even labeling agricultural products to protect the health and safety of the Mexican people. It also allows the US to continue to discriminate against Mexican workers in the United States.


USMCA NAFTA 2.0 has been supported by the US Chamber of Commerce, Trump, Nancy Pelosi, most Democrats and AFL-CIO president Trumka. While Trumka is supporting it the IAM Machinists and the United Electrical Workers UE are opposing it.

It is also opposed by the environmental organizations including Earthjustice, Food and Water Action, Friends of the Earth, Greenpeace, the League of Conservation Voters, the Natural Resources Defense Council, Oil Change International, the Sierra Club and the Sunrise Movement.
"We cannot afford to lock ourselves into a multi-decade deal that ignores climate change and helps corporate polluters,”

Multi-millionaire US Senator Diane Feinstein who is worth more than $94 million and whose husband Richard Blum who is worth over $1 billion has supported agricultural billionaires in
California and wants more “guest workers” H-2A guest-worker program who are indentured workers.

Many workers trying to build independent unions have also been fired in Mexico in Montamoros, Tecate and GM workers in Silao yet the Mexican government refuses to enforce the labor laws they already have passed.

We need to build direct links with US workers and farmers including the Driscoll's farmworkers in Baja who work for $7 a day and are supporting a boycott of Driscoll’s berries.

Feinstein who is supported by the farm owners and industrial agriculture will be voting on this bill early this year in the Senate and we are calling on this anti-labor, corporate trade agreement to be rejected.

For more info or to endorse:
info [at] upwa.info

IAM Machinists Union to Congress: Vote ‘No’ on USMCA
https://www.goiam.org/press-releases/machinists-union-to-congress-vote-no-on-usmca/?fbclid=IwAR1iAs2EQilNRCVpefDcs1CVc1lGCzpPlioK1ihMy0cnOVDaES85j-3ESS4

NAFTA Deal Is Unacceptable Template for the Future,
https://www.citizenstrade.org/ctc/blog/2019/12/13/nafta-deal-unacceptable-template-for-future-trade-agreements/?fbclid=IwAR0wIKokykQQx6mvg8si8f3x62kFfhHYa-65ZG1GeMEjgP6k64U91DR5t9o


How America Is Causing Global Obesity, China, Mexico & USMCS/NAFTA with Hasan Minhaj
https://www.youtube.com/watch?v=kmo6lZcdkO0
END_OF_DOCUMENT_TOKEN_TO_BE_REPLACED
Added to the calendar on Fri, Dec 27, 2019 10:51AM
§San Quintin Worker Calling For Boycott of Driscoll's Berries
by UPWA 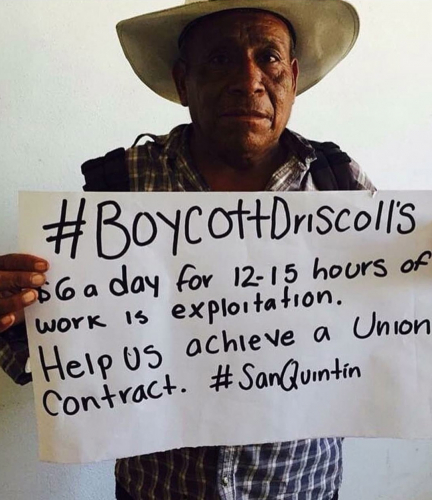 original image (1083x1253)
USMCA like NAFTA allows the continued exploitation and slave labor conditions for Mexico farm workers including Driscoll's workers in Baja, California. Farm bosses like USMCA NAFTA 2.0 because it allows continued privatization and lack of protections for consumers of agricultural and food products from Mexico. Mexico uses chemicals and pesticides that are not allowed in the US. These chemicals end up in the foods and poison unsuspected consumers in Mexico, Canada, and the US.

https://www.youtube.com/watch?v=5L3ZbQN3Iog&t=17s
Al Rojas, one of the founders of the United Farmworkers of America and Carmen Mata of National Democratic Independent Union of Agricultural Workers (SINDJA) Alliance of National, State and Municipal Organizations for Social Justice (AONEMJS) talk about the struggle of 80,000 mostly indigenous farm workers and their families at San Quintín Baja on the border of California to get decent wages and working conditions along with the recognition of their union.

As a result of NAFTA which privatized the communal ejidos lands of the indigenous farm workers, tens of thousands were forced off their land into factory farms for Driscolls and other multi-national agricultural corporations.
These presentations were made at the founding conference of the Workers Solidarity Action Network which was held on October 7, 2017 at UAW 551 in Chicago, Illinois.

Additional media:
San Quintín: The daily labor of an agricultural worker in the red
https://www.youtube.com/watch?v=RsNUEMLcmIE&feature=share

original image (1280x274)
GM fired Mexico Sila GM assembly plant workers who took action in solidarity with US GM strikers. They also opposed outsourcing at their plant. GM and VW have hundreds of thousands of outsourced workers at their plants who work at even lower wages with no protections with slave labor conditions. USMCA does not change these union-busting slave labor conditions.

We, the group of fired workers at General Motors Silao Complex who joined hand in hand and strongly supported our fellow workers in the strike at General Motors in the United States, are continuing our struggle against the employer and our union leaders, resisting their pacts and alliance with the authorities. Our struggle is not over, and we are not willing to take a step back, which is why we are requesting your solidarity and your support for our defense fund. The economic situation is hitting us hard, and the main purpose we are asking for your help is to keep going, fighting for our reinstatement and for a democratic movement of workers at GM Silao.
The labor authorities in Mexico have not shown any willingness to address the lawsuits we have filed against the transnational corporation General Motors at the Silao Complex. Those same authorities have deals with the conciliation and arbitration boards to obstruct our lawsuits and close our path. That is why we request your support for our workers’ movement and our fight for the livelihood of those workers fired at General Motors Silao Complex.
In advance, we thank you for your solidarity and understanding.
We are still fighting!
For the international unity of workers at GM!
Not one step back!
Signed,
Dolores Israel Cervantes Córdova
Pilar de la Luz Torres Rosales
Ramón Rodríguez Gutiérrez
Arturo Martínez Fernández
Javier Martínez Mosqueda
Mauricio Negrete Pérez
María Guadalupe Ibarra Ramírez
Generating Movement
END_OF_DOCUMENT_TOKEN_TO_BE_REPLACED
Add Your Comments
Latest Comments
Listed below are the latest comments about this post.
These comments are submitted anonymously by website visitors.
TITLE
AUTHOR
DATE
Sen. Feinstein/Billionaires, Union Busters Slave Traders No NAFTA 2.0 USMCA
UPWA
NAFTA 2.0 USMCA Means More KIPP Charters & Privatization In Mexico
repost
Support Independent Media
We are 100% volunteer and depend on your participation to sustain our efforts!