The Changer and the Changed - 45th Anniversary Celebration 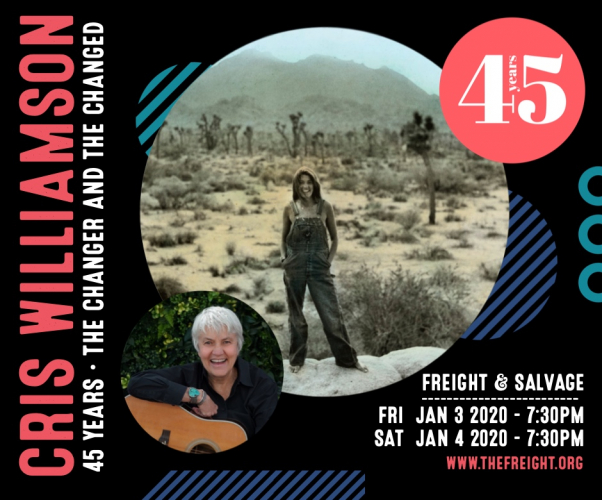 The Changer and the Changed

Forty-five years ago, from their offices in a modest home in Los Angeles, a collective of young radical lesbians released a record album that was to become the soundtrack of a movement. Olivia Records, as the collective was known, recorded and released Cris Williamson's The Changer and The Changed, which quickly became one of the most successful recordings of the time and sparked the music genre that would become known as Women's Music, around which an entire international business grew.

The success of the sales of The Changer and the Changed was key in the creation, and essential in the survival of an independent music business model which included not only the music, but its very own concert producers, record distributors, photographers, stage crews, publications, graphic designers, sound engineers, lighting designers, festivals, bookstores, coffeehouses and more --- all created for women by women. The Changer and the Changed was as much a political and cultural statement as it was entertainment.

In 2018, Cris, along with Olivia founder Judy Dlugacz, were honored with a Lifetime Achievement Award presented to them by the Americana Music Association. Ann Powers, NPR's Music Critic presented the award in front of a celebrity-studded audience in Nashville’s famed Ryman Auditorium.

Said Powers, “Cris’s 1975 album The Changer and the Changed became Olivia’s signature work. It’s a beautiful record, Americana through and through in its blend of country, folk and deeply personal songwriting. Over the years Cris has created a profound body of work, and Changer remains its crown jewel. It is one of the best-selling independent records of all time, and the label that birthed it, Olivia, became the foundation for a genuine and far-reaching community.

The mission was to speak out loud what others would keep silent.These women sang of truly being themselves, and of loving each other – in relationships, as sisters, as spiritual allies. Lives changed as listeners heard their stories openly celebrated for the first time.

The music became like an open secret, shared from fan to fan in dorm rooms and at kitchen tables, in concerts held in basements and at music festivals. It still resonates today. If you don’t know about Olivia Records, you still know what Olivia did. It created an essential blueprint for running an independent record label. It gave us great music that everyone should hear, if they haven’t. And it set people free.”

So, we invite you to share an evening, or two, with the Changer. Bring your story, your sister, your daughter or son, your sweetheart, your friend - and take your place as we pay homage to the music and celebrate our shared history.

END_OF_DOCUMENT_TOKEN_TO_BE_REPLACED
Added to the calendar on Fri, Dec 27, 2019 7:48AM
Add Your Comments
Support Independent Media
We are 100% volunteer and depend on your participation to sustain our efforts!