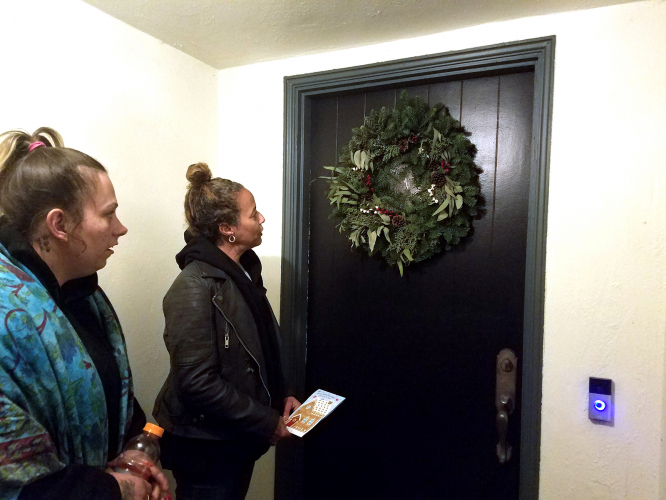 original image (1600x1200)
Schaaf has ignored previous attempts to discuss the city's mistreatment of Wood Street residents, so they thought she might pay more attention to a demonstration at her house.
§Schaaf wouldn't answer door, so Wood Street residents demands were read to her video doorbell
by Dave Id Thursday Dec 26th, 2019 11:41 AM
Copy the code below to embed this movie into a web page:
Download Video (105.9MB) | Embed Video
(video 6:49) 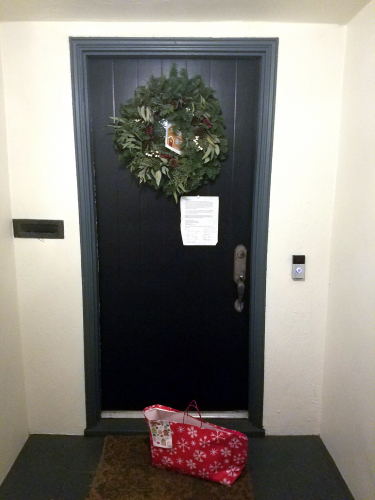 It's similar to the frugal handouts occasionally offered to curbside communities, when they get anything at all besides being pushed around.
§Wood Street residents' demand letter
by Dave Id Thursday Dec 26th, 2019 11:41 AM 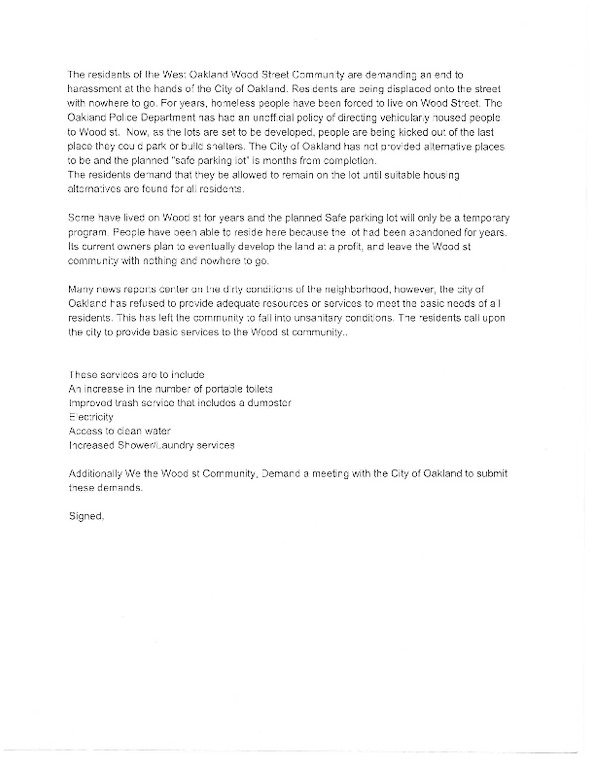 Download PDF (319.8KB)
The residents of the West Oakland Wood Street Community are demanding an end to harassment at the hands of the City of Oakland. Residents are being displaced onto the street with nowhere to go. For years, homeless people have been forced to live on Wood Street. The Oakland Police Department has had an unofficial policy of directing vehicularly housed people to Wood St. Now, as the lots are set to be developed, people are being kicked out of the last place they could park or build shelters. The City of Oakland has not provided alternative places to be and the planned "safe parking lot" is months from completion.

The residents demand that they be allowed to remain on the lot until suitable housing alternatives are found for all residents.

Some have lived on Wood St for years and the planned Safe parking lot will only be a temporary program. People have been able to reside here because the lot had been abandoned for years.

Its current owners plan to eventually develop the land at a profit, and leave the Wood St community with nothing and nowhere to go.

Many news reports center on the dirty conditions of the neighborhood, however, the city of Oakland has refused to provide adequate resources or services to meet the basic needs of all residents. This has left the community to fall into unsanitary conditions. The residents call upon the city to provide basic services to the Wood St community.

These services are to include An increase in the number of portable toilets Improved trash service that includes a dumpster Electricity Access to clean water Increased Shower/Laundry services Additionally We the Wood St Community, Demand a meeting with the City of Oakland to submit these demands.
Add Your Comments
Support Independent Media
We are 100% volunteer and depend on your participation to sustain our efforts!