Extent of Macron's attack on working class revealed. For labor, its getting personal against him. 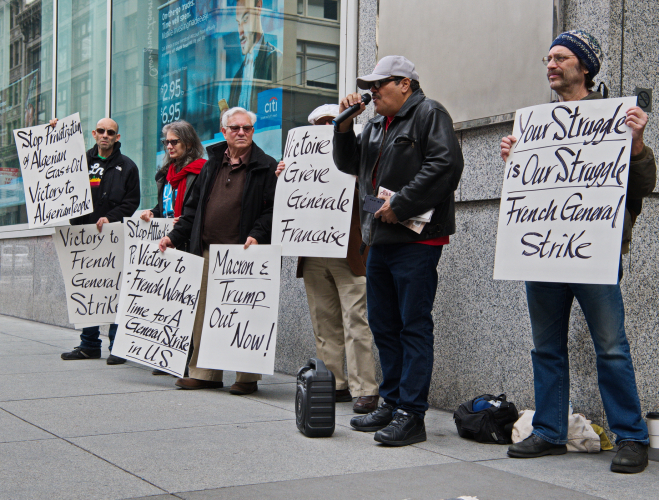 The recent demonstration days put, by lowball government estimates, 800,000 and 600,000 people in the streets. Another nationwide demonstration has been called for January 9.

While Macron has let his ministers do most of the talking, he is positioning himself as the savior who will come in and clean up the mess, ignoring that it was him that created it in the first place. Thus, hints of government “flexibility” on aspects of the central issue, the “reform” of the national pension system, have appeared.

The massive strike, now in its third week, has paralyzed most of the country’s extensive public transportation system this holiday season. The unions have allowed a small amount of truce to permit family reunions around Christmas.

The labor unions, “yellow vests”, private sector, and gig economy workers are facing not just “reforms” of France ‘s retirement system but an all out class war by the wealthy oligarchy.

A leading politician of the French Left, J.L. Melenchon, has created an itemized list of Macron’s gifts to the wealthy since his election. The total is forty three billion euros. Concurrently, services that benefit working people such as rural clinics and local rail sevice have been cut. The attempt to levy a tax (now rescinded) on the fuel that many in rural areas depended on to get to their jobs sparked the original “yellow vest” protests.

Macron has replaced the income tax on non salary income's (dividends, rents, financial transactions , etc. which is where the wealthy get their income) , formerly progressive up to forty five percent rate with a flat tax that boils down to under thirteen percent, regardless of income amount. Billionaires are now taxed at the same rate as modest working class savers.

Macron renamed the established retirement age of sixty two age a “balance” point or “pivot point”. Translation: “You can retire at sixty two but you won’t get your full retirement until you are sixty four.

Currently, retirement levels are based on income levels averaged over a number of most recent years. The “reform” proposed to base retirement levels on a workers entire work history which, or course, will average in the lowest paid early years and therefore yield a lower figure.

Adding insult to injury, years of work will now be evaluated in terms of “points” whose conversion into money is yet to be determined and may “vary”.

The government is saying that longer healthy life spans make it necessary to “work a little longer”. French retirees who currently benefit from a generous system maintain that the generosity is a social good, as it should be, that was won through generations of struggle. If the French live longer, they claim, it is because they have had to work less and have therefore been able to lead more fulfilling and healthy lives. For them, you live longer because you work less. Not that you live longer means that you must work longer.

The French labor movement is one of the most powerful and successful national labor movements in the world and French history has been imbued with a history of struggle against oligarchies. It does not look as though this is about to end.