by Brenda Norrell
'Standing with Standing Rock,' is an encyclopedia of resistance, which chronicles the Water Protector movement from the first run to Washington, and on to the camps, and the surveillance by TigerSwan, to the ultimate international divestment campaign. In its 29 chapters are poetry, essays and discussions of Indigenous rights and Treaties. 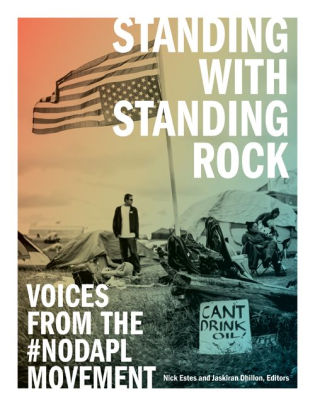 Standing with Standing Rock, Voices from the #NODAPL Movement, edited by Nick Estes and Jaskiran Dhillon, published by the University of Minnesota Press, is a roadmap to the world, the world of Indigenous resistance.

"It is prophecy," the editors begin. "A great Black Snake, Zuzeca Sapa, will spread itself across the land, bringing destruction to the land, the water, and the people."

With these words, editors Estes and Dhillon begin this monumental story, with a reminder of how a rupture of the Dakota Access Pipeline would mean catastrophe for those who depend on the Missouri River for their drinking water and a reminder that with this threat also comes hope.

"The movement reignited the fire of Indigenous liberation and reminded us that it is a fire that cannot be quelled. It provided, for a brief moment in time, a collective vision of what the future could be," write editors Estes and Dhillon.

"We waited for this," writes Sarah Sunshine Manning, Shoshone Paiute.

Down in Wakpala, Bobbi Jean Three Legs, Waniya Locke, and Honorata Defender got together and said, "Let's have a run."

Joye said, "Is there anywhere to start a camp?"

The resistance gave birth to an international movement for divestment in fossil fuels.

Michelle Cook, Dine' human rights lawyer, describes the Indigenous Women's Divestment Delegations in Europe. Cook, co-organizer of the delegations, speaks of the divestment in fossil fuels with the same passion that she spoke before the Inter-American Commission on Human Rights in Jamaica. Cook and other Native women testified about the police abuses at Standing Rock.

In Europe, the delegations met with banks, financial institutions and members of Parliament, urging divestment in the Dakota Access Pipeline and Energy Transfer Partners.

Waste Win Yellowlodge Young, Ihunktowanna/Hunkpapa of the Standing Rock Sioux Tribe, said, "Our Delegation's presence puts a face to the Indigenous communities and lives who have been displaced, abused, and adversely affected by extractive industries throughout the world."

Divestment is a powerful strategy in the world of social justice movements, says Cook. She is the co-founder of the Water Protector Legal Collective at Standing Rock and serves on the Navajo Human Rights Commission. She is the founder of Divest Invest Protect.

'In The Beginning,' he writes:

About the book editors
Nick Estes is Kul Wicasa, Lower Brule Sioux Tribe, and assistant professor of American Studies at the University of New Mexico.

Jaskiran Dhillon grew up on Treaty Six Cree Territory in Saskatchewan, Canada. She is an associate professor of global studies and anthropology at The New School.

Article copyright Brenda Norrell, Censored News
END_OF_DOCUMENT_TOKEN_TO_BE_REPLACED
Add Your Comments
Support Independent Media
We are 100% volunteer and depend on your participation to sustain our efforts!