Newswire
Calendar
Features
Home
Donate
From the Open-Publishing Calendar
From the Open-Publishing Newswire
Indybay Feature
Publish to Newswire
Add an Event
Related Categories: International | U.S. | Environment & Forest Defense
Mauna Kea Protectors Targeted with Arrest on Dec. 26, 2019
by Brenda Norrell
Friday Dec 20th, 2019 10:08 AM
Mauna Kea Protectors face arrest on Dec. 26, 2019, the day after Christmas, according to the ultimatum given them by law enforcement. Hawaii's governor is using a false narrative concerning withdrawing law enforcement from the site in an attempt to diminish the power of the movement to protect the sacred mountain. 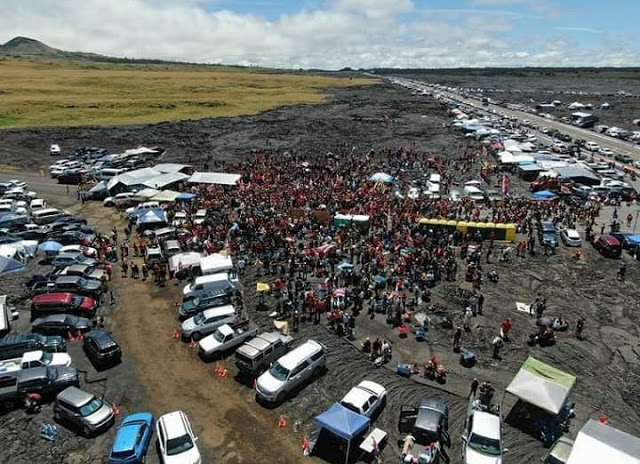 HAWAII: Law enforcement told Mauna Kea Protectors they will be arrested Dec. 26, 2019. This comes after the Governor used false PR as a tactic, promising to withdraw law enforcement. A similar tactic was used against Standing Rock Water Protectors in 2016, when they were told, 'It's all over, go home.'

Article by Brenda Norrell
Censored News
On Thursday, Day 160 of protecting Mauna Kea, Protectors said in a video address that the Governor is making contradicting statements to the public. Protectors said the Hawaiian government is attempting to diminish their strength with a false narrative in the media.

"We're not going to fall for that."

Protectors said they were given the ultimatum to remove themselves and their structures or face arrest on Dec. 26, 2019.

Statement by Pu'uhonua o Pu'uhuluhulu Maunakea
Dec. 19, 2019
This morning it was announced that Governor Ige had made the decision to pull back law enforcement from their barricades that have closed the road since July 15th. He stated that as TMT is not able to move forward at this time Law enforcement would be withdrawing for the time being. This was reported on by multiple press outlets from the Governor’s press conference. Several hours after that the state-issued an ultimatum to the Kiaʻi that conflicted with the Governor’s own words at his press conference. Kiaʻi have been given an ultimatum to move off Mauna Kea by the 26th of December or they will face arrest. This conflicts with the statement that the Governor gave saying that law enforcement would be withdrawing. The Governor also stated that $15 million dollars has been used on law enforcement operations on Mauna Kea since July. @staradvertiser originally reported that the stand-down would last 2 months.