Add an Event
Newswire
Calendar
Features
Home
Donate
From the Open-Publishing Calendar
From the Open-Publishing Newswire
Indybay Feature
Publish to Newswire
Add an Event
Related Categories: Santa Cruz Indymedia | Health, Housing & Public Services | Police State & Prisons
Winter Shelter Demands for Law Enforcement
by Robert Norse (speaking for HUFF) (rnorse3 [at] hotmail.com)
Wednesday Dec 18th, 2019 10:49 AM
These flyers are being distributed to encourage the community to contact police and politicians and demand a sane, compassionate and lawful winter policy regarding those outside in public places. They include a Sentinel opinion piece exposing criminal inaction regarding Winter Shelter by the Santa Cruz City Council 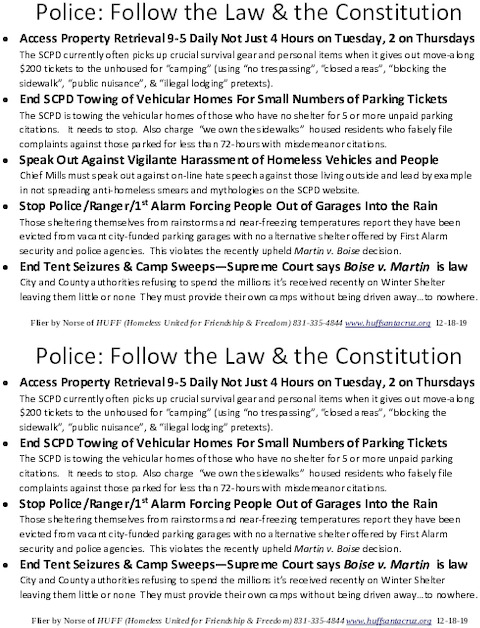 Download PDF (677.3KB)
Some of us are proposing a series of Winter Protests since City Council has gone into hibernation for the winter. We will be discussing these at Wednesday Conscience and Action and HUFF meetings (noon - 3 p.m.) at the Sub Rosa Cafe 703 Pacific Ave. next to the Bike Church.

The Sentinel recently printed the following statement (https://www.santacruzsentinel.com/2019/12/18/guest-commentary-city-officials-buck-homelessness-responsibility/) which I reprint in full since the Sentinel on-line can be hard to access. It references a nasty editorial in Stephen Kessler's regular Saturday column attacking me and Councilmember Glover at https://www.santacruzsentinel.com/2019/12/14/stephen-kessler-cummings-is-the-best-hope-for-sc-politics/ .

Incoming Santa Cruz Mayor Justin Cummings has a tough task ahead of him, but of all city officials he has the most promising prospect of restoring some civility and sanity to local politics, and of rescuing the city from the municipal malfunction it has suffered for the past year. Vaulted by leftist mastermind Chris Krohn over moderate senior Councilwoman Cynthia Mathews, who graciously (and tactically) stepped aside from her turn as vice mayor, Cummings now steps up to take the gavel from outgoing and much-maligned Mayor Martine Watkins.

Krohn’s intent was a naked seizure of power for what he’d planned to be a “progressive” takeover on the council, but between his co-conspirator Drew Glover’s belligerent behavior and the coolly deliberate dignity of Cummings, Krohn’s master plan has been upset by Cummings’s emergence as the council’s most independent thinker, the only member whose vote on virtually any issue is not a foregone conclusion.

Just as I hoped when I endorsed him before the last election, Cummings has proved to be the most thoughtful, open-minded, decent and reasonable council member, someone who operates by rational analysis—often favoring the least-bad option over utopian all-or-nothingism—rather than ideology or crowd-pleasing power games. He tries to do what he considers the right thing, not necessarily what is demanded by the loudest shouters. His role as the swing vote has earned him the enmity and vilification of the hardcore morons of the agitated left for failing to fall in line behind whatever half-baked plans they had for saving Santa Cruz from capitalism.

The indignant disappointment of this fundamentalist fringe was eloquently illustrated a few weeks ago on this page in an Op-Ed piece by the bathrobed blowhard Robert Norse accusing Cummings of no less than homicide for his failure to support public-health hazardous homeless encampments and thereby condemning the unsheltered to death. Norse, of course, has been making a spectacular nuisance of himself for more than 30 years of feckless “advocacy” for the homeless to no positive effect whatsoever, just his regular disruption of council meetings with aggressive unfulfillable demands.

Rather than actually do anything to help house anyone, Norse has made a career of pointing the finger (and the Nazi salute) at city officials and earning a well-deserved reputation as our town’s most repulsive public figure. So his attack on Cummings effectively serves as a reverse-confirmation of the new mayor’s integrity.

In our city manager form of government the mayor’s powers are limited to setting agendas and running council meetings. Policy, for better or worse, is largely driven by professional staff employees of the city based on their knowledge and experience. The mayor’s one-year ceremonial term is scarcely long enough to get the hang of the job, much less lead the city with political vision. (Direct election of the mayor and district election of council members might begin to change this dynamic, but that is a subject for another essay.)

What the mayor can do is to set the tone of civic discourse, and this, I believe, Cummings is well prepared for. As a veteran activist and organizer who knows the difference between activism and governance, an environmental scientist and a teacher, he has the skills, the aptitude, the modest attitude and the transpartisan perspective to see through the blather of the militants of whatever wing, to cultivate and help direct courteous discussion, and to hold the center of gravity against attempts by either end of the polarized council to tip the political scales unfairly in their direction.

The ideal council would have seven similarly fair-minded members who could put their egos and their ideological agendas aside and, through mutually respectful dialogue, find consensus and compromise on matters not subject to absolutist solutions. People in power must sometimes adapt to reality in order to accomplish anything. Having a mayor of such character, a principled problem solver, is at least a step in a positive direction.

I wish Justin Cummings were “the best hope” for Santa Cruz, as Stephen Kessler suggests (Dec. 14). I wish his Santa Cruz City Council or the powerful City Manager Martin Bernal were.

Since, they ignore the Winter Shelter crisis, so the community must not.

Cummings’ desertion of his renter constituents and the Progressive majority is well-documented elsewhere (“A Blast at Vice-Mayor Cummings Record As the Council Dallies” at https://www.indybay.org/newsitems/2019/10/29/18827718.php) and “Open Letter to Vice-Mayor Justin Cummings” at (https://www.indybay.org/newsitems/2019/10/21/18827505.php) and avoided any meaningful and cost-effective encampment alternatives. Kessler denounces me without addressing any of the issues.

The wretched truth is that things are back in the hands of the community. Last winter, Ross Camp was Chief Mills’ answer. The year before he directed the unsheltered to the San Lorenzo Benchlands. This year people are huddling in doorways, hiding under bridges, and ducking into parking garages (from which First Alarm evicts them into the rain). Police are destroying tents, treating homeless survival gear like rubbish, and playing deadly game of “whack-a-mole” with the disabled, elderly and vulnerable—battered and drenched by winter weather.

This year, however, we saw the beginnings of a fight back. The community moved to support Ross Camp and the subsequent better-managed Camp Phoenix with supplies, advice and volunteers. Visiting police and fire officials could find no reason to close down the camp, so authorities ignored City Council’s own camp-closing protocols and simply moved in to dislodge 60-100 people, giving most of them no place to go, a legally risky move for the City, given injunctive action being taken elsewhere in places like Santa Rosa.

The federal courts ruled that survival camp destruction is unconstitutional given lack of indoor shelter. So, Mills cops and rangers are now using other devices (“no trespassing,” “closed areas,”, “blocking the sidewalk,” “public nuisance” and “illegal lodging”) as “lawful” pretexts to play the same old game—futile, expensive and cruel as ever.

City Council—largely through the agenda manipulations of City Manager Bernal and ex-Mayor Watkins—has given us winter shelter (optimistically) for only 20% of those outside—less than last year in spite of huge amounts of incoming money. Supporters of the Mathews-Myers “Old Guard” have used a well-funded smear/censure campaign outside cash to crush progressive reform again as they did to defeat last year’s rent control reform.
We must challenge their key weapon–the false “Homeless as Menace” narrative, liberally laced with “needles” and “poo poo” bugaboos. In a classic “smear the victim” tactic City staff has cut back bathroom access (Louden Nelson, for instance), reduced shelter, funded police and rangers to destroy homeless tents and property, and dismissed the angry response at City Council as “incivility,” “bullying,” and “vilification.”

But the truth seeps out. The winter is upon us again. And there is no escaping the visible reality of those shivering outside.

Meanwhile, the City Manager and Mayor postpone any discussion of action until January. The Council goes on Xmas vacation. The Council’s homeless CACH committee obediently presents its report without protest. Two Homeless Death Memorials mourn the dead this week (10 a.m. Thursday at Harvey West and 4 p.m. Saturday at the Post Office).

But the City has vacant buildings, unused property, hundreds of displaced renters (the real majority of the homeless population), and hundreds more community members who care enough to act. It’s clear the those outside must create or take their own shelter and those who give a damn must support them.

Take blankets, tents and clothing to Food Not Bombs from 4-6 p.m. Saturdays and Sundays outside the main Post Office. Help encourage the homeless and their supporters to create their own survival areas. Contact the Santa Cruz Homeless Union at 831-431-7766 to support such efforts and back legal challenges as reactionary city officials move to drive homeless out of sight and out of town.