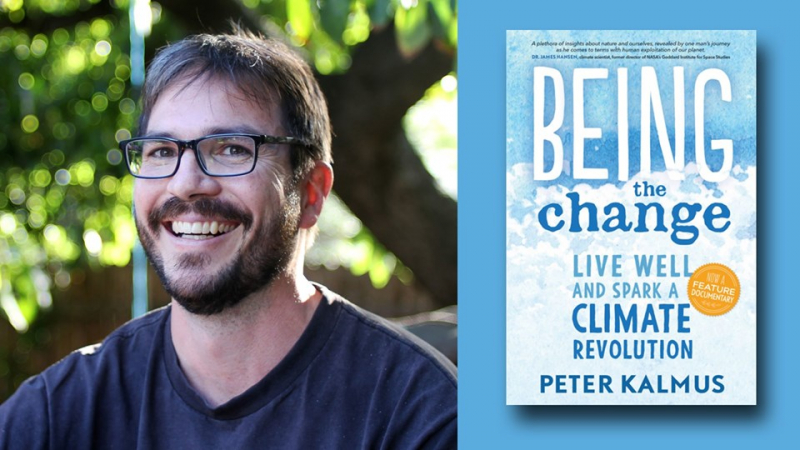 We all want to be happy. Yet as we consume ever more in a frantic bid for happiness, global warming worsens. Alarmed by drastic changes now occurring in the Earth's climate systems, Peter Kalmus, a climate scientist and suburban father of two, embarked on a journey to change his life and the world. He began by bicycling, growing food, meditating, and making other simple, fulfilling changes. Ultimately, he slashed his climate impact to under a tenth of the US average and became happier in the process.

"Being the Change" explores the connections between our individual daily actions and our collective predicament. It merges science, spirituality, and practical action to develop a satisfying and appropriate response to global warming.

Part one exposes our interconnected predicament: overpopulation, global warming, industrial agriculture, growth-addicted economics, a sold-out political system, and a mindset of separation from nature. It also includes a readable but authoritative overview of climate science. Part two offers a response at once obvious and unprecedented: mindfully opting out of this broken system and aligning our daily lives with the biosphere.

The core message is deeply optimistic: living without fossil fuels is not only possible, it can be better.

Peter Kalmus is a climate scientist at NASA's Jet Propulsion Laboratory with a Ph.D. in physics from Columbia University. At work he studies the physics of clouds in a changing climate, and at home he explores how we can address climate change while living happier, more connected lives. He lives in Altadena, California, a suburb of Los Angeles, with his wife and two children on 1/10th the fossil fuels of the American average. He enjoys orcharding, beekeeping, and backpacking. Peter speaks purely on his own behalf, not on behalf of NASA or Jet Propulsion Laboratory.
END_OF_DOCUMENT_TOKEN_TO_BE_REPLACED
Added to the calendar on Wed, Dec 11, 2019 7:37PM
Add Your Comments
Support Independent Media
We are 100% volunteer and depend on your participation to sustain our efforts!