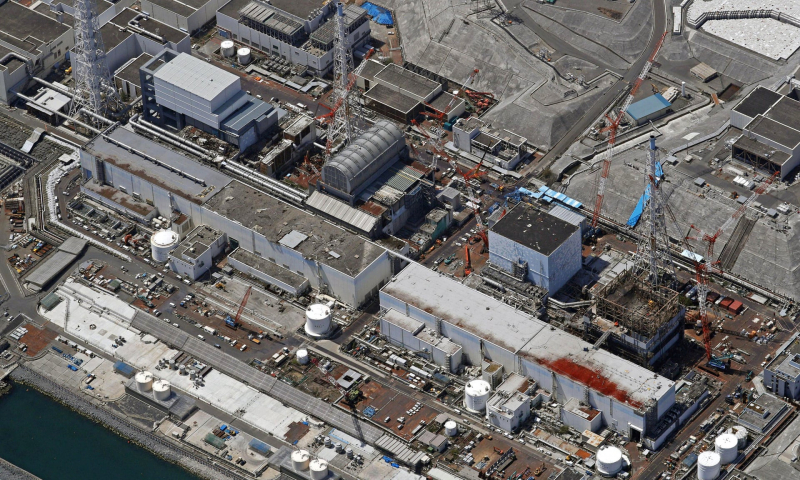 The Japanese Abe government continues to work to restart nuclear plants including the Onagawa nuclear plant close to Fukushima. Also the government is still saying that Fukushima has been
decontaminated despite the fact that even government agencies like the METI say it will take decades to clean up the radioactive plants.
Now is the time to speak out and mobilize against the Olympics in Japan and for a halt in the restarting of the nuclear plants.

METI eyes 2031 end to Fukushima No. 1 cleanup-Experts say a 30- to 40-year completion decommissioning target is too optimistic.
The Japan Times

The Fukushima No. 1 nuclear power plant is seen in this photo taken on March 11. | KYODO


METI eyes 2031 end to Fukushima No. 1 cleanup-Experts say a 30- to 40-year completion decommissioning target is too optimistic.
https://www.japantimes.co.jp/news/2019/12/02/national/road-map-fukushima-nuclear-cleanup/#.XeVDCy2ZPxU

The industry ministry on Monday unveiled a revised plan to remove molten nuclear fuel debris from the meltdown-hit Fukushima No. 1 power plant in 2021 — a process said to be the biggest hurdle to decommissioning the six-reactor facility.
Work to remove the debris should start with the No. 2 reactor, according to the mid- to long-term road map released by the government.
Designating a specific time frame for the first time, the plan also calls for completing the removal of 4,741 fuel rods left inside the cooling pools for reactor Nos. 1 to 6 by 2031.
“As more people return and rebuilding progresses in the areas around the No. 1 plant, we will take measures based on the basic principle of balancing rebuilding and decommissioning,” said Minister of Economy, Trade and Industry Hiroshi Kajiyama, who heads the state team tasked with decommissioning the heavily damaged plant.
The plan, revised for the fifth time, maintains the general outlook for finishing the cleanup within 30 to 40 years of the triple meltdown, which was triggered by the mega-quake and tsunami on March 11, 2011.
But, given issues that have halted work and caused delays so far, it remains uncertain whether the plan will proceed as scheduled.
Here is a look at some of the challenges facing Fukushima No. 1:
Melted fuel debris

By far the toughest challenge is removing the 800 tons of nuclear fuel that melted in the three reactors before dropping from their cores and hardening at the bottom of the primary containment vessels.
Over the past two years, Tepco has made progress gathering details mainly from two of the reactors. In February, a small telescopic robot sent inside the No. 2 reactor showed that small pieces of debris can come off and be lifted out. Thus debris removal is scheduled to begin there by the end of 2021.
Earlier, assessments of the No. 3 reactor were hampered by high radiation and water levels in the PCVs. A robot survey at the No. 1 reactor also failed from extremely high radiation.
Experts say a 30- to 40-year completion decommissioning target is too optimistic. Some doubt that removing all of the fuel is even doable and suggest an approach like Chernobyl — contain the reactors and wait until radioactivity naturally fades.
Fuel rods

Together, the three reactors have more than 1,500 units of mostly spent nuclear fuel rods inside that must be kept cool in pools of water. They’re among the highest risks at the plant because the pools are uncovered, and loss of water from structural damage or sloshing in the event of another major quake could cause them to melt and release massive radiation.
The manager of the plant, Tokyo Electric Power Company Holdings Inc., started removing rods from the No. 3 reactor pool in April and aims to get all 566 out by March 2021. Removal of rods from units 1 and 2 is to begin in 2023.
By 2031, Tepco plans to remove thousands of rods at the two units that survived the tsunami and store them in dry casks on the compound. Over 6,300 fuel rods were in the six reactor cooling pools at the time, and only the pool at No. 4 has been emptied.
Tainted water

The government and Tepco have been unable to get rid of the more than 1 million tons of radioactive water that has been treated and stored on site, fearing public repercussions. The utility has managed to cut the volume by pumping up and diverting groundwater upstream, as well as by installing a costly underground “ice wall” around the reactor buildings to keep water from entering.
Tepco says it only has space for up to 1.37 million tons until summer 2022, raising speculation it might release the tainted water after the 2020 Olympics. Tepco and experts say that the tanks are hampering decommissioning work and that the space they occupy must be freed up to build storage for the debris and other radioactive materials to be removed. There is also the risk that the tanks might fail and release their contents in the event of another quake, tsunami or flood.
Experts say a controlled release of the water into the ocean is the only realistic option, one that will take decades. For years, a government panel has been discussing methods amid opposition from fishermen and residents who fear it will damage their products and their health.
Radioactive waste

Japan has yet to develop a plan to dispose of the highly radioactive waste that will come out of the reactors. Under the road map, the government and Tepco will compile a plan sometime after the first decade of removal work ends in 2031.
Managing the waste will require new technologies to compact it and reduce its toxicity. Tepco and the government say they plan to build a temporary storage site for the waste. But finding a site and getting public consent to store it there will be nearly impossible, raising doubts the cleanup can be finished within 40 years.
Manpower concerns

Securing a workforce for the decades-long project is yet another challenge, especially in a country with a rapidly aging and declining population. Tepco announced plans to hire foreign workers for the decommissioning process under Japan’s new visa program to attract unskilled foreign labor, but put it on hold after receiving government instructions on careful planning to address concerns about language problems and safety. Universities are also struggling to attract students in nuclear science, a formerly elite major that has become unpopular since the Fukushima crisis.

The Fukushima No. 1 nuclear power plant is seen in this photo taken on March 11. | KYODO

A nuclear power reactor in northeastern Japan that was damaged by the 2011 earthquake-tsunami disaster and idled under stricter safety standards following the Fukushima crisis got the nuclear watchdog’s approval Wednesday to resume operations.
The No. 2 unit of Tohoku Electric Power Co.’s Onagawa plant in Miyagi Prefecture received the green light after the addition of anti-disaster measures including a towering seawall that is nearing completion.
It is only the second nuclear reactor damaged by the March 2011 calamity after the Tokai No. 2 power station in Ibaraki Prefecture to clear the Nuclear Regulation Authority’s new safety standards. The basement floors of the No. 2 unit at the Onagawa complex were flooded.
The plant straddling the town of Onagawa and the city of Ishinomaki still needs to complete the anti-disaster measures as well as receive local consent to restart, meaning it will almost certainly remain offline until after fiscal 2020.
Its operator, Tohoku Electric, expects to spend ¥340 billion ($3.1 billion) on the measures, primarily the 800-meter long wall reaching 29 meters above sea level along the perimeter facing the Pacific Ocean to guard from tsunami as high as 23.1 meters.
Costs for enhanced safety measures have ballooned and are expected to further swell with the construction of facilities to be used in the event of a terrorist attack, also required under the new safety standards.
The Onagawa plant is the closest nuclear plant to the epicenter of the magnitude 9.0 quake that struck northeastern Japan on March 11, 2011, and heavy shaking triggered an automatic shutdown of its three reactors.
While the No. 2 reactor building suffered flooding from the subsequent 13-meter tsunami and lost up to 70 percent of its earthquake-resistance strength, the plant’s emergency cooling system remained intact and it did not suffer a meltdown like the Fukushima No. 1 plant run by Tokyo Electric Power Company Holdings Inc.
Tohoku Electric applied for a safety screening for the No. 2 reactor in December 2013, and its restart would save the utility ¥35 billion annually in fuel costs. The No. 1 reactor is scheduled to be decommissioned, while the utility is mulling whether to seek approval to restart the No. 3 reactor.
The Onagawa No. 2 reactor may become the first boiling water reactor — the same type used at the Fukushima No. 1 plant — to resume operations after the disaster, which claimed nearly 16,000 lives and left more than 2,500 missing. In Onagawa, more than 800 were killed or went missing.
Other boiling water reactors at Tepco’s Kashiwazaki-Kariwa plant in Niigata Prefecture and the Tokai No. 2 plant of Japan Atomic Power Co. already have NRA approval to resume operations, but are yet to obtain local consent.


Mist showers are used at a test event for beach volleyball in Tokyo in July. (Asahi Shimbun file photo)


Spending on anti-heat measures for the Tokyo Olympics and Paralympics will more than double to about 10 billion yen ($92 million) to protect athletes, spectators and staff from the expected sweltering weather next summer, officials said.

The Japanese organizing committee and the Tokyo metropolitan government were initially expected to each pay 2 billion yen for conventional anti-heat measures, including tents and fans set up at sites for security checks, according to an Olympic official.

However, safety concerns have risen about Tokyo’s hot and humid summers, prompting Japanese organizers and the Tokyo metropolitan government to compile additional precautions for the Games.

Both sides each agreed to spend an additional 3 billion yen to provide protection against the heat.

The ballooning expenses are expected to be included in the budget draft for the Olympics, which is scheduled to be announced at the end of December.

International sports organizations called for greater anti-heat measures after test events were held in Tokyo this summer to gauge the conditions.

Fears for the athletes’ safety were so intense that the Olympic marathon events were moved to Sapporo.

Even with the additional measures, some related officials remained doubtful on whether anything would be effective in a metropolitan area that has baked under record high temperatures in recent years.

“Will they be enough?” one official asked.

The organizers and the Tokyo government will spend hundreds of millions of yen to prepare more than 1,300 tons of ice and set up baths to cool off the athletes at more than 100 competition and training venues.

They will also use additional freezers and refrigerator trucks at the sites.

Each staff member working outdoors will be given four plastic beverage bottles, while indoor workers will receive two bottles each.

For spectators, the total area of shade tents will increase by about 2.5 times the initial estimate to about 20,000 square meters.

The number of water fountains at outdoor venues will increase so that there will be one faucet per 500 to 3,000 people based on congestion forecasts, the officials said.

In past Olympics, plastic bottles have been banned at venues because of anti-terrorism measures and complaints from beverage companies that were official sponsors of the Games.

However, organizers said that one bottle will be permitted per person at the Tokyo Olympics. They said they are in discussions with sponsors on whether the labels on the bottles should be removed.

Frozen plastic bottles are expected to be prohibited at Tokyo Olympic venues for security reasons. But officials may allow people to bring in pieces of ice in water bottles as well as frozen but soft refrigerant packs.

The Tokyo government’s anti-heat measures for the marathon races are not included in the extra precautions.


(The article was written by Daisuke Maeda and Yusuke Saito.)
END_OF_DOCUMENT_TOKEN_TO_BE_REPLACED
Added to the calendar on Tue, Dec 10, 2019 9:40PM
§Bags With Radioactive Waste In Fukshima
by No Nukes Action 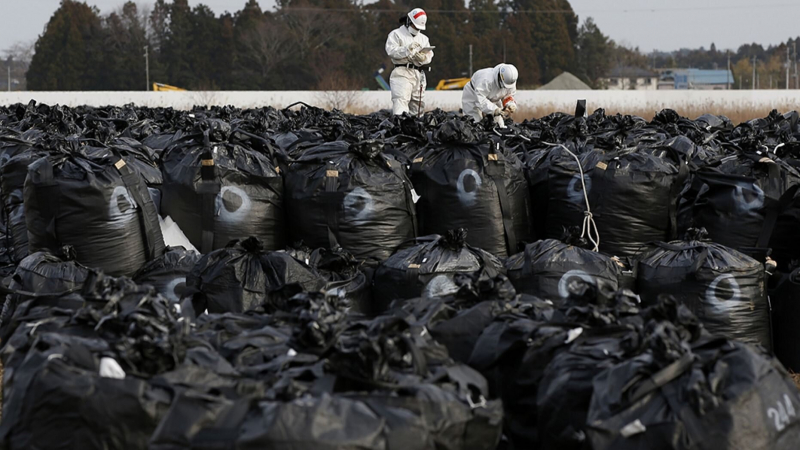 original image (1862x1048)
Thousands of plastic bags filled with radioactive surround Fukushima.
END_OF_DOCUMENT_TOKEN_TO_BE_REPLACED
Add Your Comments
Support Independent Media
We are 100% volunteer and depend on your participation to sustain our efforts!