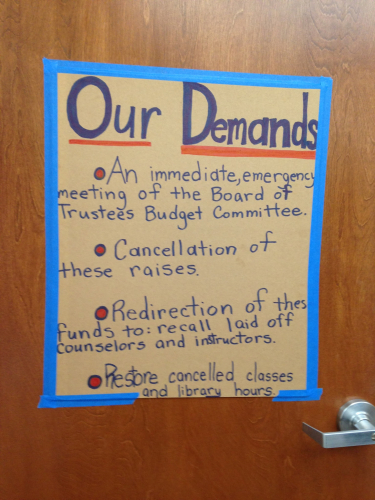 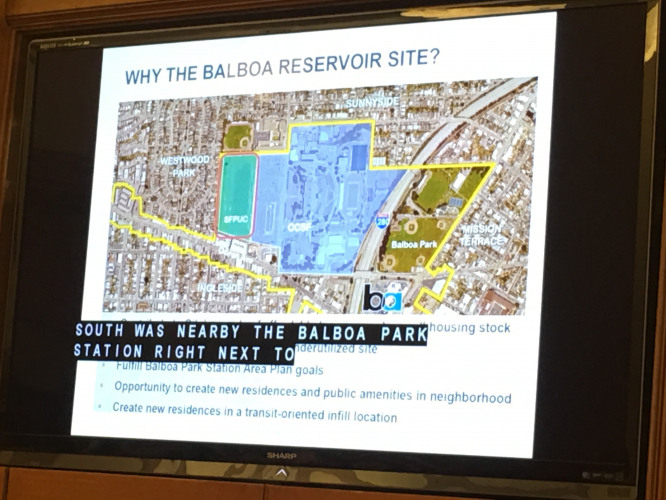 original image (4032x3024)
While butchering the CCSF classes and raising executive salaries, CCSF Mark Rocha and the Board of Trustees want to build 1100 condos on the SF PUC reservoir most of which will be for high paid tech workers. The City of San Francisco has spent millions of dollars pushing this development
https://ccsfheat.wordpress.com
§Flyer-Stop Rocha's 280 Class Cuts At CCSF
by HEAT Monday Dec 9th, 2019 9:51 AM 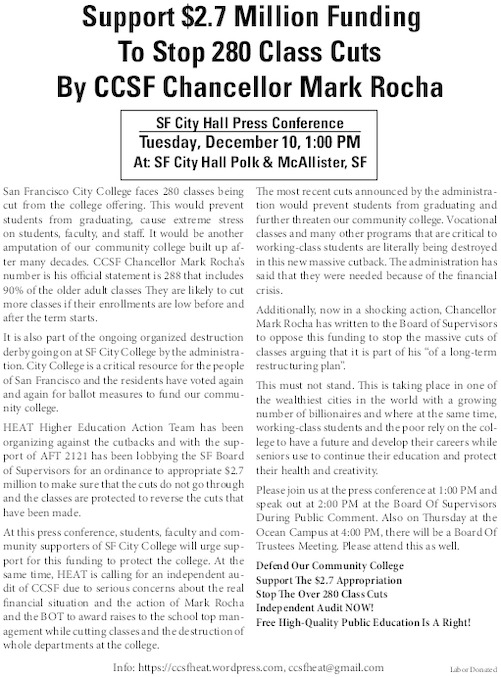 CCSF ends its Older Adults classes, leaving 2,000 students in the cold-Chancellor Rocha Says “This situation is not an emergency,” Rocha wrote, indicating that college leaders don’t want help from the city. He said he was “fully aware of the emails you are receiving from CCSF students who are appealing for funds to restore classes that have not been budgeted for the spring.” But he and the trustees “are handling this difficult situation directly here at the college.”


City College of San Francisco alum and proud parent of current student Jaime Moran walks through the main campus on Wednesday January 14, 2014 in San Francisco, Calif. The accrediting commission granted CCSF two more years to get everything in order to avoid losing accreditation. "It's great new for everyone," said Moran.
Photo: Mike Kepka / The Chronicle 2014
Shock and outrage erupted as soon as word came that City College of San Francisco would decimate its cherished Older Adults program this spring in its latest round of cuts eliminating hundreds of credit and noncredit classes.

“We fear the assault on older adults is just the first strike planned by Chancellor Mark Rocha,” Robert Fitch, who teaches in the Disabled Students program, said in an email to student advocates, one of many from faculty and students seeking help. “We need to call attention to this attack on older adults in San Francisco.”

The decades-old program serves more than 2,000 people, many in their 70s and 80s, with 50 free, noncredit classes tailored to that age group. Many are held in senior centers and hospitals around the city. Students take tai chi for balance. They study music, figure drawing, theater, literature and writing to keep their minds sharp. They learn computer skills to stay connected to the world. And all the classes, they say, relieve loneliness.


City College had an operating budget of about $267 million in fiscal 2018.

“I’m speechless. I’m so upset,” said Audrey Ferber, an author who teaches writing and women’s literature in the program. “Nobody will deny that lifelong learning keeps seniors living and thinking longer, and keeps them out of doctors’ offices.”

“This is age discrimination!” theater students Lea Ann and Mike Fleming wrote to their supervisor, Catherine Stefani. “Please provide this funding immediately to ensure that City College of San Francisco remains the community college the city wants and needs. For a city with an annual budget of more than $9 billion, this seems like a reasonable request.”

The theater class attracts nearly 40 students, including board members of the city’s major theater companies, said Patricia Miller, the director and producer who teaches it. The college is “cutting a major limb out of the city’s ecosystem.”

To explain their budget woes, college officials said former leaders routinely spent more money than they took in. The failure to keep spending in line, and other management missteps, prompted a five-year struggle by the college in 2012 to hang on to its accreditation and keep from closing.

“Obviously, the college wishes it could have avoided these cuts, but it cannot continue to spend more on faculty salaries than it takes in,” said Evette Davis, Rocha’s spokeswoman.

The state kept City College afloat during its accreditation crisis with an extra $39 million a year, on average. But that cash cow vanished with the crisis in 2017. Since then, the college has slashed 634 classes, 20% of its offerings, mainly noncredit.

“It’s up to us to make sure that we’re living within our means,” Alex Randolph, president of the college’s board of trustees, told The Chronicle. “We’re doing our job. What we were elected to do.”

And next year, he said, the accreditors are coming back to check up on the college.

“We cannot bankrupt our public institution and have CCSF close. Do we want to go through that again?” Randolph asked, adding that he’s been working with Supervisor Gordon Mar to create a higher education fund to benefit City College. “We are in an emergency.”

But Chancellor Rocha told a different story in a letter to Mayor London Breed and the supervisors last week.

“This situation is not an emergency,” Rocha wrote, indicating that college leaders don’t want help from the city. He said he was “fully aware of the emails you are receiving from CCSF students who are appealing for funds to restore classes that have not been budgeted for the spring.” But he and the trustees “are handling this difficult situation directly here at the college.”

The class cuts, he said, were “part of a long-planned restructuring of the academic program to prioritize the graduation of students of color” in preparation for the state’s new method of funding community colleges.

That kicks in in 2021. The state will no longer fund colleges solely by enrollment. A new “Student Centered Funding Formula” will create an incentive for colleges to help low-income students: those who qualify for federal Pell Grants and state fee waivers, and undocumented students. Under the new approach, 20% of funding will be awarded for enrolling more such students, and 10% if the college improves their graduation rates, their transfers to university, or the number of vocational certificates they earn.

It’s not clear how eliminating the noncredit Older Adults program helps the college prepare for that, and college officials did not respond when asked.

In his letter to the city, Rocha identified another change in state law that explains why some for-credit classes were cut. As California State University did last year, community colleges must eliminate remedial math and English classes that don’t help students graduate more quickly. Students will instead take college-level classes and receive extra academic support.

“We have prioritized the budget to give more ... high-demand courses that students need to graduate,” Rocha told the city. “We have also added a ‘Graduation Guarantee’ (so that) any student who needs a course to graduate in May 2020 will get it, regardless of budget.”

As for the course cuts being part of a long-term plan, Ferber, the writing instructor for older adults, said that was hardly a good explanation.

“They could have told us this many months ago,” she said. “Shouldn’t they have helped steer us in the direction of finding alternative funding before leaving us out in the cold? That would have been kinder.”

Nanette Asimov is a San Francisco Chronicle staff writer. Email: nasimov [at] sfchronicle.com Twitter: @NanetteAsimov
https://ccsfheat.wordpress.com
Add Your Comments
Support Independent Media
We are 100% volunteer and depend on your participation to sustain our efforts!