Flashmob against femicide: "Rapist in your way" from Chile 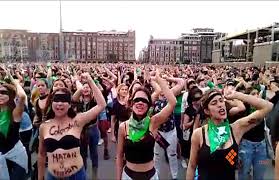 This Saturday a group of women, mainly from Chile, will be performing a flash mob dance called "A Rapist in your Way" in solidarity with all the women in the world who have been sexually abused. This flash mob has been spreading virally from Chile around the world.

You are invited to join us at noon in front of the Ferry Building in San Francisco. After presenting the performance we will be walking in silence to Dolores Park and Clarion Alley to place where we will stop and perform.

The performance “Un violador en tu camino” (“A rapist in your way”) performance will be presented in Spanish, English and sign language. All the women who are going to participate will be wearing black and their eyes covered, with the aim to bring awareness of the violence that all the women around the world live since the day they were born.

This global feminist movement started last month on the International Day for the Elimination of Violence Against Women. On November 25th, Dozens of women gathered outside the Supreme Court building in Santiago, Chile to present the performance “Un violador en tu camino” (“A rapist in your way”). This hymn was created, organized and led by Las Tesis a local feminist collective. The song and dance take on the patriarchy, the cops, judges and the state for being responsible for the violence against women and the victim shaming and blaming that often comes after the victims report to the police or media. That's why it says: “Y la culpa no era mía, ni dónde estaba, ni cómo vestía,” (“And it wasn’t my fault, where I was, or what I wore.)

These flash mob words have been repeated across the world over thousands of women in Chile, France, Spain, the UK, Colombia Mexico among other countries. This brilliant public feminist performance piece “A rapist in your way” (“Un violador en tu camino”) has even been translated into French, German, English and even sign language.

Protecting women against gender-based violence is a human rights issue often overlooked globally. In Latin America, the laws exist to protect women, but those laws are often not uniformly implemented, and there is often a lack of political will to fully comply with the law and international obligations.

Atrocities against women have been happening in Chile (and everywhere) for a long time, but since October 18th, when a civil protest erupted against the oppressive regime in Chile, many women protestors have been found dead and raped by military police. Among the dead is La Mimo, a female clown, whose name is Daniela Carrasco, who was taken from the protest by police and was found raped and murdered.

We are not an official organization. We are women and women's accomplices from all backgrounds who have been concerned about the violence and brutality. We have been reunited around La Peña Cultural Center for talking and supporting Chile.

Join the feminist flash mob from Chile that's been spreading around the world in protest of femicide and oppressive governmental regimes!

WHEN: Sat. Dec 7th at noon
WHERE: The SF Ferry Building (near Embarcadero BART)

Learn the song and dance moves in English and Spanish below: 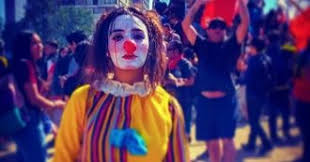 Rest in Power La Mimo! Killed and raped by military police in Chile October 18th.
Add Your Comments
Support Independent Media
We are 100% volunteer and depend on your participation to sustain our efforts!