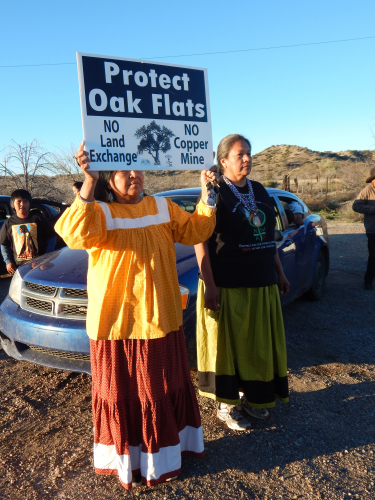 Chi’Chil’Bilda’Goteel (Oak Flat) -- How do you respond to a White Man whose name is Paul Gosar, an Arizona Congressman who recently said, “You’re still wards of the government.”

And then he continues and says, “One of the federal government’s dirty little secrets is that Native American tribes are not fully sovereign nations in today’s society.”

He continues that his, “comments made at the roundtable before Christmas in 2014 were about his reality and current laws that govern the relationship between tribes and the federal government.”

He could easily be labeled the “Christopher Columbus” of this century just like Arizona Senator, the late John McCain could’ve be labeled as one.

How much more can these White Men who don’t give a crap about our Apache People continue to ridicule us? How much longer can we take this? These are the robots of Resolution Copper Company doing business under the Rio Tinto mining giant along with their bought Arizona Congresswoman, Ann Kirkpatrick. And add to that list, Arizona State Senator Jeff Flake who is the former lobbyist for Rio Tinto!

Exactly how much did they pay their token “Apaches” to write letters to the Senate and Congress and tell them it’s okay to build the mine at Oak Flat? How many Apaches in total? How could our own Apaches betray our own people’s beliefs? How could they sell us out so easy?

Over 1,000 pages of the Defense Bill which entailed over $585 billion of dollars was signed. What happens to the San Carlos Apaches now? What happens to our holy site at Chi’Chil’Bagoteel? What about our acorn and medicinal plants there? What about the traditional ceremonies planned in the future?

The major concern that we have is about our water. Where will this mining giant get the water from? They need over 50,000,000 (50 million) gallons of water to operate that each year. Where will it come from? Will they go after the legislatures to get that water from us? They will be only 12 miles away from the Gilson Wash District boundary line of our reservation. Then what?

Cancer! Our water will be infested and our people will continue to die from cancer. Why doesn’t anyone think about that? Especially those “few Apaches” who sold us out!

Do you think for one minute that the people wouldn’t find out how you betrayed your own Apache people? For what? So you could side with a foreign mining company from Australia? And yet you claim to be a San Carlos Apache?

There’s ways that these things leak out and have a tendency to be shared with others. There’s a bigger battle that we need to fight and that is to protect our sovereignty. Here, Congressman Gosar is basically making fun of us and at one time he was our Representative from our District. We have had Arizona Congresswoman Kirkpatrick who isn’t any better and sold us out, too. And why does she wear campdresses at the Apache parades? Who gave them to her when she doesn’t even respect the Apache ways and she has no right to be wearing our traditional wear. She’s a disgrace to us because she doesn’t truly represent us or our interest.

This is the time that we need to unite as Apaches as one people. It’s not this district against that district or that candidate against that other candidate, it’s about the whole and entire San Carlos Apache Tribe that we have to defend. If we don’t, who will help us? Absolutely no one and these White People will continue to make fun of us and ridicule us which is downright sickening.

Please keep the members of our San Carlos Apache Tribal Council in prayer that they will continue to stand together as one and not be easily swayed or bought out. That they will be true to their constituents and vote as one body in prayer and keeping all of the San Carlos Apaches in their best interests. I applaud former Chairman, Wendsler Nosie, Sr., and our current re-elected Chairman, Terry Rambler and re-elected Vice-Chairman, Tao Etpison, for all working together in unity to protect the interests of our San Carlos Apaches.]

Resolution Copper has brought a group of security that are connected to ISIS. They are the ones that were at Standing Rock! And remember what happened at Standing Rock—the indigenous people were pepper sprayed and shot at by pellet guns and some serious injuries were sustained as a result. Although some of the indigenous people were jailed, their cases were all dismissed! So, Resolution Copper—a foreign company that is not even going to pay one penny of tax after raping Na’Gu’Stan (Mother Earth)—is willing to go that far and shoot at our own Apache People? Think about that.

I was brought up to be a proud Apache and proud of my heritage and where I come from. I’m sure many of you were taught those ways, too. By no means, will I shun away my fellow Apaches in their fight to stand up for what rightfully belongs to us. This was Apacheland first! Before any White Man ever walked on this land! That’s what they fail to remember. The White Man has failed us, over and over again through their greedy and selfish actions. This is another hard rock that has been thrown at us while we are standing. Congressman Gosar can call us, “wards of the government,” all he wants. We are still human beings that don’t want no part of the British Parliament or the Roman Empire.

The words of our ancestors still hold true today, “You are born an Apache! You will die as an Apache! Don’t ever act like the White Man—the enemy!”

Please continue to keep our former Tribal Chairman and leader of our Apache Stronghold in prayer, Wendsler Nosie, Sr., as he completed his spiritual journey from Old San Carlos to Chi’Chil’Bilda’Goteel (Oak Flat). The prayers of our Apache People are strong! We have been here since time immemorial. Our Apache way of life is way too strong.

We are not the immigrants! We are the original habitants of Na’Gu’Stan (Mother Earth)!

The heartbeat of Na’gu’staan (Mother Earth). The Han’diin (Yellow Pollen) used with the white clay from our sacred sites and the water mixed with it for our Sa’ma’gish’a (White Painted Woman) is like filling the thirst of Mother Earth. Each participant while dancing in her ceremony is blessed tenfold for bringing their prayers. All so that Sa’ma’gish’a (White Painted Woman) can live to be an elder and teach and advocate for our Apache way of life. While dancing and praying at Chi’Chil’Bilda’Goteel (Oak Flat) my mind is silently screaming, “Never ever surrender!”

These same words were said to us often by our dearly and beloved late grandmother and the spirit of the Apache is alive today as we are challenged to stand up to protect what is rightfully ours—our Apache way of life that no one, not even the White Man can ever take away from us. And no one can take away my feelings and opinion as an Apache! Basically, we are not for sale! 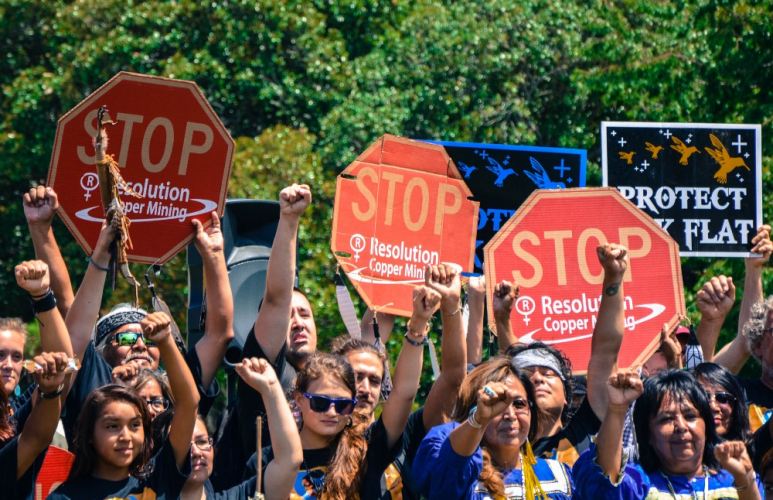 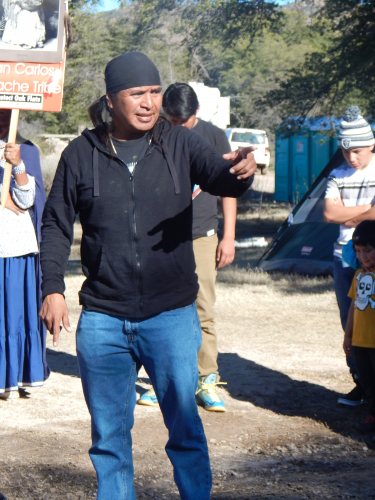