Newswire
Calendar
Features
Home
Donate
From the Open-Publishing Calendar
From the Open-Publishing Newswire
Indybay Feature
Publish to Newswire
Add an Event
Related Categories: U.S. | Racial Justice
'No Spiritual Surrender: A Dedication to the Standing Rock Movement' Photos of Resilience
by Brenda Norrell (brendanorrell [at] gmail.com)
Friday Dec 6th, 2019 6:49 AM
Photojournalist Ryan Vizzions photos of Standing Rock Water Protectors in the camps and on the frontlines have appeared around the world. Vizzions' new book chronicles the resilience and resistance of Water Protectors and the militarized police they faced, with forwards by Joye Braun, Cheyenne River Lakota, and Pte San Wastewin, Hunkpapa Lakota. 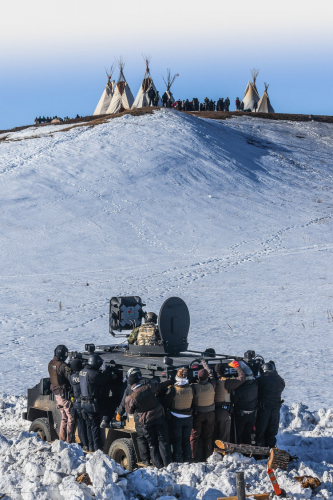 original image (750x1125)
'No Spiritual Surrender: A Dedication to the Standing Rock Movement' Photos of Resilience and Resistance by Ryan Vizzions

Ryan Vizzions' new book of photographs, 'No Spiritual Surrender: A Dedication to the Standing Rock Movement,' is a testament to those who stood, those who endured, those who locked down, those who were jailed, those who remain imprisoned, and those who were wounded in the longstanding resistance in defense of the water, Mni Wiconi, Water is Life.

Ryan's book of powerful photos, 'No Spiritual Surrender,' chronicles Standing Rock Water Protectors' camps, with his photos that have been featured in the media around the world.

In the forward, Cheyenne River Lakota Joye Braun, Wanbli Wiyan Ka'win (Eagle Feather Woman) tells the story well, as only she can, as one of the first to arrive to defend the water.

On April 1, 2016, a horseback ride from Fort Yates to Cannonball on the Standing Rock Nation, was underway, responding to the threat of the Dakota Access Pipeline poisoning the water of the Missouri River.

Among the first to arrive was Joye's cousin Wiyaka Eagleman.

"When he realized I was going to be out there camping alone, he wasn't going to let that happen," Joye writes.

Paula Antoine and independent media Unicorn Riot were among the first to respond. With meager tents and tipis, the Sacred Stone Camp on LaDonna Allard Brave Bull's land was born.

When August came around, the Native youths were off running to Washington.

"We had no idea when we put the call out what would happen next. Our wildest dream was a couple hundred people showing up and us doing actions along the route to try and stop Energy Transfer Partners' project Dakota Access Pipeline. That didn't quite happen."

Joye remembers that in the months that followed there was the morning call out, "Wake up! The Black Snake is coming!"

As miles long caravans poured in, there were the lockdowns, and then on Oct. 27, 2016, the police raided Treaty Camp. At that point, there was no doubt what Energy Transfer Partners or the State of North Dakota were willing to do in order to build the pipeline.

The mercenaries, TigerSwan and others, were there. They had earned their stripes in Iraq and Afghanistan against other Indigenous Peoples in another war for oil.

Joye said the mercenaries' lies followed the dollar bill. This is what Americans believe in, the greed. "Never assume that the Indian wars were over. They were never over."
The story of Mni Wiconi did not end in February of 2017, with the militarized police raid on the camps.

"We didn't surrender," Joye said. "We were told to take the cry of Mni Wiconi, Water is Life, to the world."

In the book, Wastewin shares the history of the Lakota, Dakota and Nakota people. "On Standing Rock, we descend primarily from the Hunkpapa and Blackfeet Lakota, and the Ihuntowan (Yanktonai) and Cuthead Dakota and Nakota bands among the Oceti Sakowin -- though we also maintain active kinship relations with our relatives across the other Sioux reservations ..."

Wastewin shares the details of the Four Directions Walk, Run, March and Ride, which was the forerunner of the camps which are now history. She describes the efforts of Honorata Defender, Jonathan Edwards, Waniya Locke, Bobbi Jean Three Legs, and the many other Standing Rock youths and elders who first had the vision to rise up and defend the water.

"The movement born at Standing Rock has since grown into a beautiful worldwide network of relatives and allies," Wastewin writes, pointing out that it spread to Bayou Bridge resistance along the southern leg of the DAPL pipeline in Louisiana, and resulted in an international divestment campaign.

Wastewin says, "Our youth united Oceti Sakowin in a way that most of us never imagined possible, and we are endlessly humbled by their capacity for imagining a better, more sustainable future for us all."

Joye gives credit to Ryan for highlighting the struggle, as Indigenous Peoples tell their story. Joye points out that Ryan crowd-sourced the publication, avoided using a major publishing company and gave 500 books to Water Protectors.

'No Spiritual Surrender,' includes a list of the 75 law enforcement agencies from 10 states that participated in the militarized assault on peaceful Water Protectors, resulting in 836 arrests and numerous critical injuries of Water Protectors who were shot with rubber bullets and projectiles by law enforcement.

Atlanta-based Photojournalist Ryan Vizzions arrived at Standing Rock in September of 2016, sleeping in a tent at first, then on media hill, and finally at the Cannonball Recreation Center, staying and helping with media until the end came in February of 2017. His photos appeared around the world as it happened at Standing Rock. 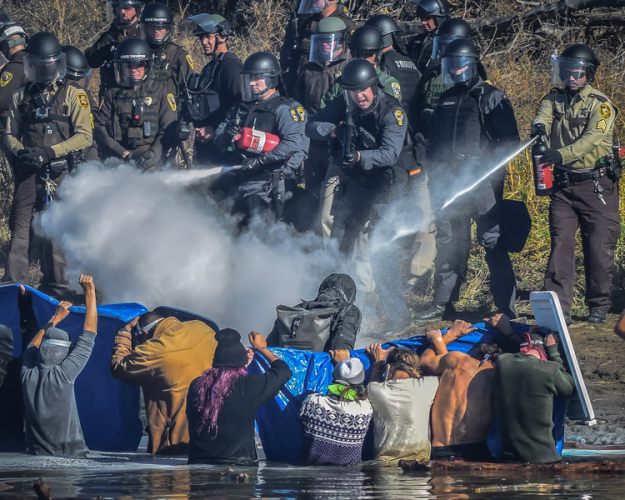 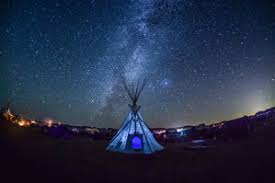 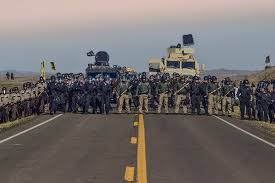