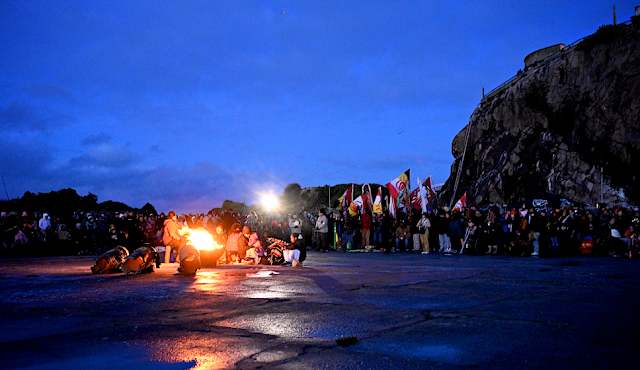 SAN FRANCISCO -- On the ferry from San Francisco Bay to Alcatraz, Lakota Bill Means says it is a good day, a day that is symbolized by Alcatraz as a prison, and by the Occupation of Alcatraz that was the beginning of the movement.

"It's good to be here, it is the renaissance of the movement," Means told radio host Dennis J. Bernstein on KPFA's Flashpoints.

Dine' Lenny Foster said Leonard Peltier, a symbol of the movement, is suffering in prison.

"They are afraid if they release him, he would talk and inspire a nation," Foster said of Leonard Peltier, in poor health in Coleman Prison, a high-security prison for male inmates in Florida.

"They want to basically kill him because he is a symbol of the resistance. He is our Nelson Mandela. He is our Geronimo."

Approaching Alcatraz on the ferry, Means said the prison on Alcatraz represents the relocation and boarding schools that have confined Native people -- but Alcatraz also represents the students from the University of California Berkeley and San Francisco State who took Alcatraz and occupied it.

Means remembered the Hopi who were imprisoned here. "If you wouldn't become baptized, you would end up here."

"All of these things come to mind when you come to Alcatraz."

"When you come here, you are regenerated."

Means said the resistance began to build with the Occupation of Alcatraz and the fight for Treaty rights was on. The fight against the corporations taking the Black Hills was underway.

At dawn on Alcatraz, Rumšen Am:a Tur:ataj Ohlone Tribal Chair Dee Dee Ybarra welcomed the more than 4,000 gathered. She encouraged all to celebrate in unity with all people.

"We want to welcome all of you and give everyone a good memory of being here."

Sharing goodwill and speaking in her own language as the traditional singers prepared to begin, she said, "Many blessings and good fortune to all of you, all my relations."

Listen here to the full Flashpoints program on KPFA:
https://kpfa.org/archives/2019/11/28/

Article copyright Brenda Norrell, Censored News
https://bsnorrell.blogspot.com/
Add Your Comments
Support Independent Media
We are 100% volunteer and depend on your participation to sustain our efforts!