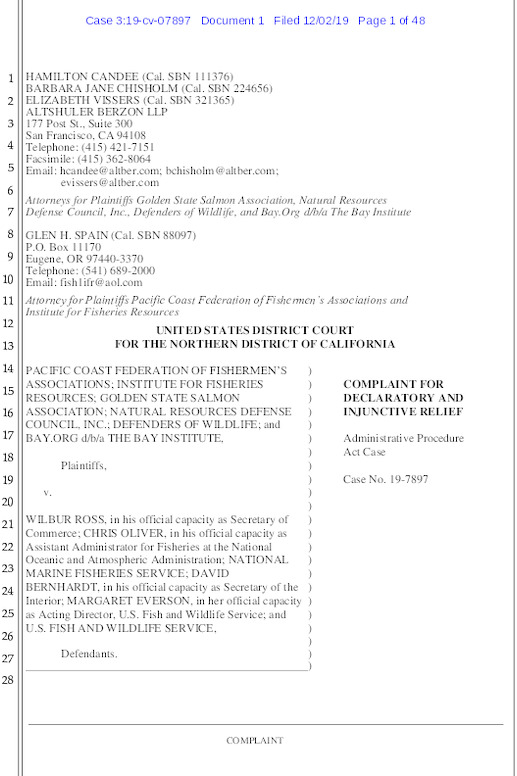 Download PDF (608.1KB)
Fishing and environmental groups today sued the US Fish and Wildlife Service and the National Marine Fisheries Service for acting in an “arbitrary and capricious manner” in their failure to uphold the protection of imperiled salmon and other species under the federal Endangered Species Act (ESA) in their recent adoption of biological opinions.

“Contrary to the requirements of the Endangered Species Act, 16 U.S.C. §1531, et seq., the biological opinions at issue in this case were blatantly and improperly shaped by political motivations and authorize Water Project operations that will cause grave harm to species and their critical habitat, increasing the risk of extinction of endangered and threatened salmon, steelhead, and Delta Smelt,” according to the lawsuit.

This filing follows the filing of a 60 day notice of intent to sue filed recently by the same groups with the US Bureau of Reclamation for violation of the ESA. Today's filing alleges violation of the Administrative Procedures Act by NMFS and FWS for acting in an arbitrary and capricious manner relative to the adoption of the recent biological opinions that could lead to extinction of various species, including Sacramento River winter and spring run Chinook salmon.

"This legal action seeks to restore some common sense balance and compromise to how we share water here in California,” said John McManus, President of the Golden State Salmon Association (GSSA). “There’s plenty enough to keep our salmon and other wildlife healthy and provide for the people who live in southern California. There isn’t enough to dump it on desert ground in the western San Joaquin Valley, which Interior Secretary David Bernhardt seems hell bent on doing.”

McManus noted that the salmon industry in California supports tens of thousands of jobs from both commercial and recreational salmon fishing economic activity.

“We're at the southern border of where salmon exist in North America and GSSA and allies are taking action so we don't see salmon and other native wildlife go extinct on our watch,” said McManus. “The protections being stripped by Bernhardt and company from winter and spring run salmon will also badly harm the fall run salmon our industry depends on."

The lawsuit was filed at a critical time for salmon, steelhead, Delta smelt and other ESA-listed species in the Central Valley rivers and San Francisco Bay-Delta Estuary.

Today, the California Department of Fish and Wildlife updated its fall midwater trawl survey data for 2019. The survey for November 2019 produced ZERO Delta smelt, just like the September and October surveys did.

If December's results are the same, that would be the second year in a row that zero Delta smelt are found in the survey. This fish, found only in the Sacramento-San Joaquin River Delta, once was the most abundant fish in the entire Delta, but years of water exports to corporate agribusiness interests, combined with toxics, pollution and invasive species, have pushed the smelt closer and closer to the abyss of extinction.

On the other hand, the U.S. Fish and Wildlife Service found 15 delta smelt with 1,500 sampling tows in September-November 2019 through its Enhanced Delta Smelt Monitoring Program.

For information on last year's fall midwater trawl survey, please read my article in the Sacramento News and Review: On extinction’s edge https://www.newsreview.com/sacramento/on-extinctions-edge/content?oid=28051331
Add Your Comments
Support Independent Media
We are 100% volunteer and depend on your participation to sustain our efforts!