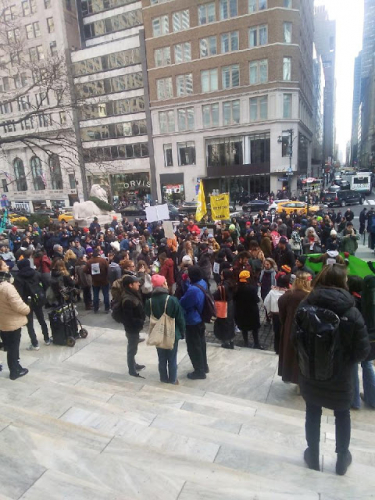 Ofelia Rivas said she "shared the message for people to consider a personal conscious choice to end consumerism driven by this corporate system."

"The message from Indigenous Peoples is to protect Mother Earth. They are here taking this action, and it is a sign that people have heard our message," Rivas told Censored News.

While in New York, Rivas opened the 20 Million Women Strong organization event in the East Village. She provided a prayer song for Bolivians at the "Impunity with the Aymara Community of Bolivia," gathering of The Center for Constitutional Rights and Harvard Law. She also gave a presentation at the Concerned Citizens for Change meeting at Manhattan College.

The Extinction Rebellion action in New York was part of planned Black Friday protests around the world, with activists blockading shopping malls in Paris, Montreal and Madrid, calling for an end to consumerism.

Rivas is founder of O'odham Voice against the Wall and has lived her life on her homeland, battling the U.S. Border Patrol who sit outside her home. One U.S. Border Patrol Special Operations Agent from El Paso pulled a gun on her as he was stalking her at her gate. 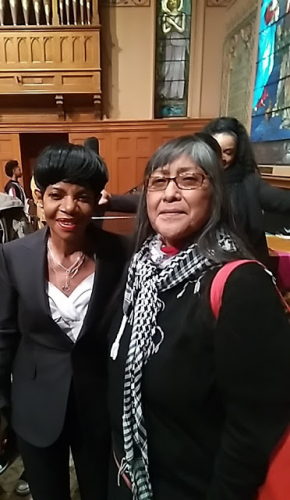 original image (372x640)
Singer and actress Melba Moore (on left) with Ofelia Rivas, Tohono O'odham, in New York. Photo courtesy Ofelia Rivas.
https://bsnorrell.blogspot.com/
Add Your Comments
Support Independent Media
We are 100% volunteer and depend on your participation to sustain our efforts!