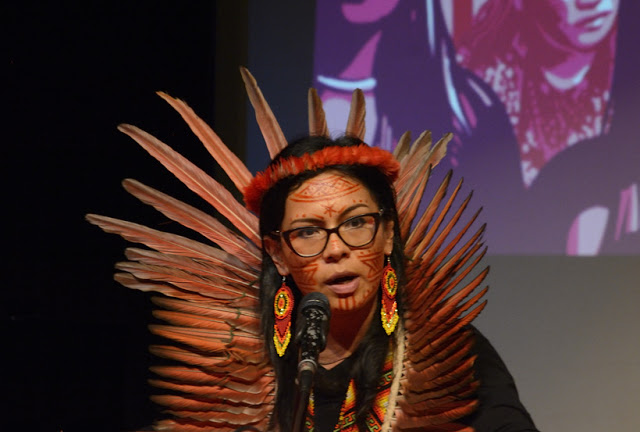 DAIARA, TUKANO FROM BRAZIL: EUROPE MUST STOP INVESTING IN THE GENOCIDE INDUSTRY

"The relationship we have with nature is a relationship with our Mother. Thus, Nature is necessarily a woman, as she bears all life in her womb, and, when women march, it is always with that large family, the whole forest and that womb that gave us all life." -- Daiara

Daiara Tukano, from the Tukano People of Brazilian Amazonia, was invited by the Committee in Solidarity with Indigenous in the Americas, CSIA-Nitassinan. Her speech is a masterpiece in denouncing colonialism and capitalism. Daiara is an artist, painter and musician. And a Warrior. -- Christine Prat

PARIS -- Anne Pastor, journalist: Let’s say that he [Bolsonaro] has taken a very clear position. I think that during his campaign, he even said that the laws protecting the forest were a hindrance for the economic development of the country, and he promised to break them. We feel that he is true to his words.

Daiara: That person seems, at least, to be very determined to do what he says, it was not necessarily the case with the previous government. But Amazonia has always been a target for all kinds of attacks, and the struggle of Indigenous Peoples in Brazil has been going on continuously for at least 519 years. The issue is not so much a government being more violent than another, violence is permanent. However, it has to be said that, at the moment, violence becomes institutionalized, through the discourse of the Head of State, which confers a kind of impunity to all the crimes committed on our territories and against our populations.

Journalist: He is even particularly lenient when it concerns the clear-cutting of the forest!

Daiara; Yes! I am not sure that it is interesting to talk about that person, right at the beginning of this discussion. The Indigenous Movement has much more to say. Moreover, the title of the present discussion is ‘Our body, Our territory, Our mind’. ‘Our Territory’ was the name of the first Indigenous Women March, in August, in Brasilia, a march that was a very important moment, as women came from about everywhere in the country. We gathered 1500 women from everywhere, to walk and confront the situation created by the present government. Of course, Amazonia has always been endangered, at least for 500 years. In our territories, there is the exploitation of what is called natural resources, and also a continued colonial, racist relationship, with colonizers still trying to invade all our living spaces, not only the physical territories, the earth itself, but also to deny the existence of Indigenous Peoples. Thus, it is much more complicated than just the Bolsonaro government. It is clear that we have now reached a situation of deforestation that puts the whole forest in immediate danger. Some thirty years ago, when the Eco 92 took place in Rio de Janeiro, there were already 1000 warnings, showing that deforestation in Amazonia had a limit, that the forest was getting weaker, that it had reached an irreversible point, while at the time the limit was considered to be the clear-cutting of 20% of the forest. In only one year of Bolsonaro government, with that impunity, it guarantees to big farmers, big landowners, and the promise of mining, as well as attempts to soften all environmental rights to allow that exploitation, we are already far over that 20 % that was supposed to maintain the forest standing. And it is not by chance that it is burning everywhere, through criminal actions, and it is not by chance either that the Big Industry, the Big Agribusiness, and the Mining industry exert more and more pressure on the government – it was already happening under previous governments – to develop a discourse, in which, again, ‘economic progress’ does not give a damn about Indigenous Peoples lives, the life of the forest and everything in it.

Journalist: I thought it was important to talk about the present context and to state that indeed, since 2018, the process accelerated and that we are now confronted with a situation of real danger […]

So, there is indeed a climate of insecurity and violence that unfortunately exists in Brazil, in Amazonia…

Daiara: As I said before, this story has long existed, it is the history of colonization, the history of genocide, and, in the region where my People live, at the border between Brazil, Colombia and Venezuela, of all kinds of trafficking. This territory is also a target for this government to exploit mining, mainly near the Pico Da Nablina, where they mine for niobium, a metal that appears to be very expensive. But that exploitation process has always been pushed through a vision of development. And it must be said that colonization almost necessarily implies racism, which has become structural in our society and has created several mechanisms to weaken our Indigenous societies. It implies the denial of our identity, our culture, our languages, and the lack of all possible public policies by the State. Thus, our populations still have very little access to education, health, transportation, communication, etc., and are still deliberately made invisible by the media and those who own them, in government and in the big industry. Through my work, I see that it is the same everywhere in the world, be it in Siberia, where the forest is burning too and where territories are also attacked by illegal gold mining, in Canada or in the United States, where they have the same situation with oil exploitation. It is the same situation everywhere, it is the ongoing genocide, colonialism and racism, which is taboo in a society that believes it is globalized and post-colonial. For us, reality is quite different from what people learn at school and even in universities. Nobody talks about it, thus we must talk about it.

Journalist: This is why I said, at the beginning of our discussion, that it is time to listen to you, all the more so that you are a kind of ideas laboratory for tomorrow, at least as far as Amazonia is concerned. Anyway, it is saving the future of our planet as well and you, American Indians, but also the Peoples of Siberia, take a stand as the keepers of this nature. We must rethink the world and rethink its relationship with nature.

Daiara: For my part, I find perfectly cynical that XXIst century idea of asking Indigenous people how to save the planet. And I don’t like that word “American Indians”, because India is on another continent, and it is possible to use other words. So, if today 80% of the biodiversity on earth is on Indigenous Territories, it is not by chance, it is because of our culture, our relationship to the world, and the fact that we consider that we are ourselves part of Nature, not the owners of Nature. What is at stake is a series of values – we can use a dirty word – an epistemology, which is different in its relationship with the universe, and if we still exist as Indigenous Peoples, it is precisely because we have a way of thinking, an identity, a relationship with the world that have maintained themselves, that continue to exist. We have not yet been totally colonized, thus colonialism – too bad for you – is not totally realized, and we still resist, our existence is our resistance, and what we have to share is the possibility to have other values. I find very interesting that people started to talk, to think at last about colonization, as we are all children of colonization. We are not going to question history here, we are not going back in time, it is impossible. But when we talk about “de-colonial” thinking, we denounce a lot of violence but we are not proposing much. Thus, for my part, I prefer “counter-colonialism”, and what I mean by that is to share other values, those which exist in our societies. Sharing does not mean forcing other ideas upon people, but rather to share life relationships. Otherwise, some will say “What? Now Indigenous people want to colonize Europe!”, but we have little interest in that, it is a quite infertile territory. In opposition, what is fertile is the people’s interest and their desire to do something else. And what I can say about the forest, for instance – I talked about it in England, with our allies of Extinction Rebellion, who are making some noise everywhere – is that, although it is necessary and very important to stick posters and denounce violence, a forest cannot be planted with posters, and there is no B planet. It is important to love oneself and each other, it is important to plant a forest, and in order to plant a forest, you have to accept changes in your way of life. A forest has to be planted at least twenty years before it begins to be born. Thus, it is not a movement for a weekend, it is not something to just make a nice movie about, a documentary or a beautiful photo and then claim to support the Indigenous Peoples’ struggle. You really need to put your hands and feet in the soil and plant and dedicate yourself to keep life on this planet, as we all depend on each other.

French and English at:
http://www.chrisp.lautre.net/wpblog/
https://bsnorrell.blogspot.com/
Add Your Comments
Support Independent Media
We are 100% volunteer and depend on your participation to sustain our efforts!