Add an Event
Newswire
Calendar
Features
Home
Donate
From the Open-Publishing Calendar
From the Open-Publishing Newswire
Indybay Feature
Publish to Newswire
Add an Event
Related Categories: San Francisco | Racial Justice
The Occupation of Alcatraz: LaNada War Jack 'From Self-Determination Back to Termination'
by Brenda Norrell (brendanorrell [at] gmail.com)
Thursday Nov 28th, 2019 12:32 PM
Dr. LaNada War Jack, Shoshone Bannock, said the Occupation of Alcatraz meant a new era of self-determination which is now threatened by the Trump administration's era of termination. Speaking at the annual AIM West UnThanksgiving Feast, during the 50 Year Anniversary of the Occupation of Alcatraz, War Jack shared memories of 'Taking the Rock' in 1969. 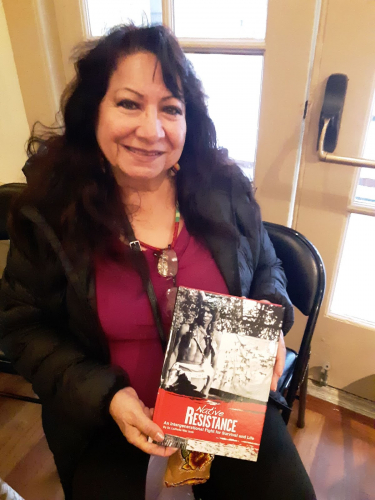 SAN FRANCISCO -- The victories that came with the Occupation of Alcatraz 50 years ago are now threatened by the Trump administration, said Dr. LaNada War Jack, Shoshone Bannock, at the American Indian Movement's UnThanksgiving dinner here.

"I'm really happy that we finally made it to our 50th year. There's been a lot of progress, we've gone forward, and unfortunately, we've gone many steps back as well because of the present administration. And of course after Standing Rock, he signed that executive order to allow the Dakota Access pipeline to continue, and now we have polluted waters in Montana," War Jack said in an interview with Censored News at the annual AIM West feast.

"We have gone forward into self-determination and now back into the termination era under the present administration."

War Jack said she is hopeful with the young people moving on, standing up and speaking up.

War Jack shared the events that led up to the Occupation of Alcatraz 50 years ago, when she and fellow students took the island.

The occupation resulted in sweeping changes in federal law and new funding for Native Americans, at a time when state and federal governments were seizing lands and attempting to annihilate Native Americans in the 1960s.

War Jack said, "I'm here to celebrate the 50th Anniversary of Alcatraz, and also the Third World Strike at Berkeley. It is our 50th anniversary there as well."

"What that means is that it was the first interdisciplinary department of ethnic studies, of African American, Asian, Chicano, and Native American Studies."

War Jack said it all started at the University of California at Berkeley and went statewide. The university ethnic studies department was replicated across the country.

"So, happy -- first step Berkeley," she said in the interview.

Copyright Brenda Norrell
https://bsnorrell.blogspot.com/
Add Your Comments
Support Independent Media
We are 100% volunteer and depend on your participation to sustain our efforts!