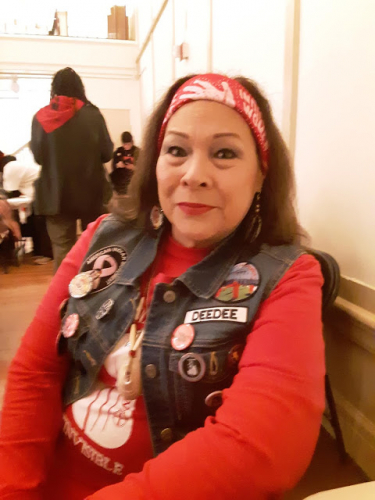 "President Trump is trying to entice us by signing a deal saying he is going to form a task force, which I believe is not true. He is using us to try to get our vote, to try to get our people to back him," Ybarra told Censored News during the American Indian Movement's annual UnThanksgiving Feast here.

Ybarra is on the board for Missing and Murdered Indigenous Women and People in California and serves as the assistant director of AIM Southern California.

Ybarra said of Trump's executive order, "It is not worth any more than any other piece of paper that they sign to help our Native people -- remember the Treaties that are no more than a worthless piece of paper."

"We need to be out there, we need to bring awareness," she said, urging people to stand together in solidarity and be out there looking for missing people. The word must get out where people are missing from, so people can look for them.

Ybarra said, "We must make people accountable for what they have done to harm our people, our women, our men, our children and bring awareness of who is missing."

“We will leverage every resource we have to bring safety to our tribal communities, and we will not waver in this mission,” Trump said. “We’re taking this very seriously. This has never been done before. And I’ve seen it, just by reading and watching the news -- it’s a very serious problem. It’s a horrible problem.”

Ybarra makes it clear that Native people have heard this type of political rhetoric before.

Native Americans are celebrating the 50th Anniversary of the Occupation of Alcatraz this week, which resulted in widespread new federal laws for Indian people.

Copyright Brenda Norrell, Censored News
https://bsnorrell.blogspot.com/
Add Your Comments
Support Independent Media
We are 100% volunteer and depend on your participation to sustain our efforts!