Add an Event
Newswire
Calendar
Features
Home
Donate
From the Open-Publishing Calendar
From the Open-Publishing Newswire
Indybay Feature
Publish to Newswire
Add an Event
Related Categories: Americas | International | Santa Cruz Indymedia | U.S. | Global Justice & Anti-Capitalism | Health, Housing & Public Services | Police State & Prisons
Commander X Seeks Political Asylum from the Government of Mexico
by Alex Darocy (alex [at] alexdarocy.com)
Friday Nov 22nd, 2019 4:46 PM
Anonymous has announced that Commander X, also known as Chris Doyon, will present himself to the government of Mexico during the first week of December at the Federal Building in San Miguel de Allende, where he will ,"tender his petition for political asylum and request refugee status." The announcement comes after two years of waiting and planning from safe-houses provided to Commander X by Mexican friends and supporters. Commander X had been living in hiding in Canada since 2012, after he escaped U.S. federal charges against him for hacking into the City of Santa Cruz's website in 2010, in relation to organized protests against the local camping ban and other homeless related issues. [Photo: Commander X shortly after setting up his space on the first night of sleep during Occupy Santa Cruz on October 6, 2011] 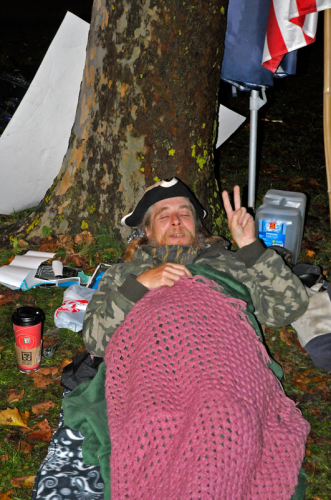 original image (531x800)
"X" became well known in Santa Cruz for his participation in PeaceCamp2010 and Occupy Santa Cruz, where on October 6, 2011 he was the first person to set up bedding and lie down for the first night of sleep in San Lorenzo Park. He became a mentor figure to activists during the two month occupation, and he shared his knowledge about a wide range of contemporary political actions with many. It was during the PeaceCamp time period that he hacked into the City of Santa Cruz website, attempting to disable it.

Commander X described his motivation for first traveling from the East Coast to Santa Cruz, and then later hacking into the City's website, in his autobiography "Behind the Mask," where he writes that he was "ordered" to do so by another hacker in Anonymous as revenge for a homeless friend who was found dead under a bridge while living in Santa Cruz.

In 2012, Commander X left the United States to escape the federal charges which were filed against him for hacking. He became established in Canada. Commander X's 7325 kilometer mission overland from Toronto to central Mexico seeking political asylum has been dubbed, "Anonymous Operation Golden Eagle."
. 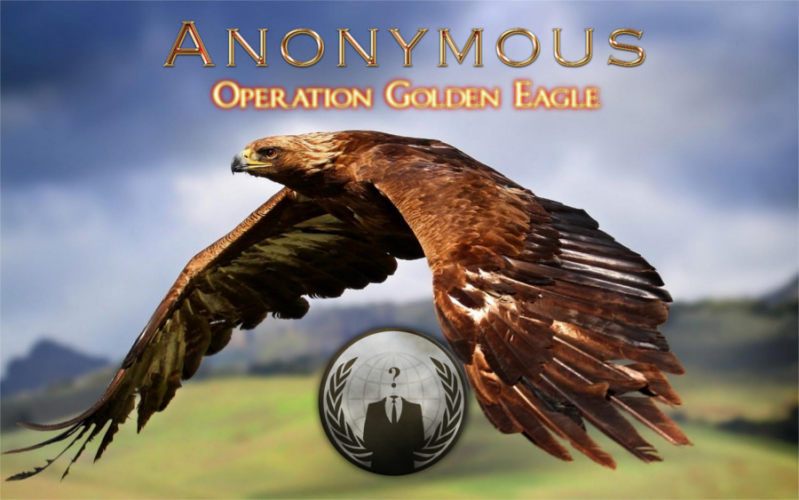 After a 7325 kilometer journey overland from Toronto to central Mexico, and over two years waiting and planning patiently from safe-houses provided to him by generous Mexican friends and supporters - we are pleased to announce that the final Phase Two of this Operation is now engaged! During the first week of December of this year, Commander X, aka Christopher Mark Doyon - will present himself to the government of Mexico at the Federal Building in San Miguel de Allende, where he will tender his petition for political asylum and request refugee status. The event will be live streamed, and there will be media in attendance.

For this final phase of Anonymous Operation Golden Eagle, we and Commander X himself would like to briefly enlist the assistance of the entire Global Collective. What we have in mind is a firm, yet benevolent and friendly online pressure campaign targeted at just three officials of the government of Mexico who will make the final decision regarding the fate of Commander X. While we have full confidence in the government of Mexico doing the right thing and protecting this political dissident from the USA, we would like them to know nevertheless that the world is watching. Anons and other information activists who would like to assist in this crowd-sourced online campaign should visit the Op website and follow the Twitter account for Action Alerts and updates. We all thank you for your help in advance.

For those here in Mexico, or travelling to Mexico - who are interested in direct "court support" by personally attending the surrender in San Miguel de Allende - we thank you. Please reach out to us via Twitter or other methods to coordinate a meeting place and safety. Your presence will be welcomed by X and his crew as he approaches this fateful moment in his journey. Media and Press who wish to cover this historic moment should likewise reach out in advance of the surrender day to coordinate places and times. There will be a formal Press Conference immediately after the surrender in a nearby city, the details will be announced just before the surrender. 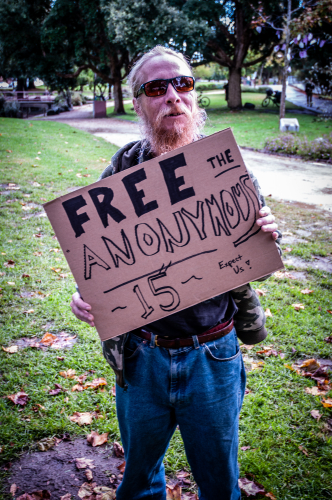 original image (1993x3000)
Commander X holds a sign in support of the Anonymous 15 at San Lorenzo Park during Occupy Santa Cruz on October 6, 2011. In July of 2011, 15 people suspected of involvement in the Anonymous movement were arrested following raids in Italy and Switzerland.
http://alexdarocy.blogspot.com/
Add Your Comments
LATEST COMMENTS ABOUT THIS ARTICLE
Listed below are the latest comments about this post.
These comments are submitted anonymously by website visitors.