Add an Event
Newswire
Calendar
Features
Home
Donate
From the Open-Publishing Calendar
From the Open-Publishing Newswire
Indybay Feature
Publish to Newswire
Add an Event
Related Categories: San Francisco | Racial Justice
Wampanoag Hartman Deetz 'No thanks no giving' history in Paris
by Christine Prat
Thursday Nov 21st, 2019 7:38 AM
As AIM West prepares its annual Un-Thanksgiving dinner in San Francisco, and Native Americans gather for the 50th Anniversary of the Occupation of Alcatraz, Hartman Deetz, Wampanoag, shares the real origin of Thanksgiving, the history of murderers and thieves from the Pilgrims to the Trump administration. 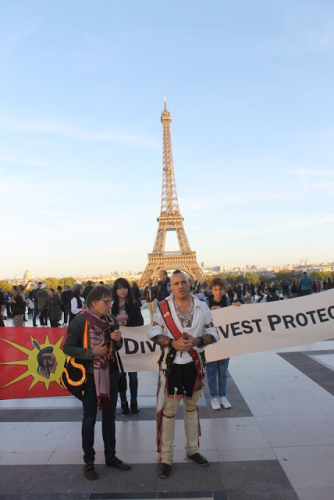 Hartman Deetz: Bonjour. [He presents himself in his own language]. Good evening. My name is Hartman Deetz, I am from Mashpee and a Wampanoag. I think the easiest is to talk about the campaigns I am working on: the state flag, and the Mashpee Reservation Reaffirmation Act. These issues can be interconnected, as many things in this world can be interconnected.

We are going to deal with some history, as most Native issues have their roots and their origins in history. Many of the wrongs done to people in the Americas have their origins hundreds of years back. We only in recent decades started to talk about and address that these things are wrong.

We are commonly known as the Indians, the Pilgrims, and the Indians. We are “the Indians”. But we never get our own name. So, to understand what we are dealing with as Wampanoag people, we are in our original homelands, something that is not the case for many Indigenous Peoples in the Americas.

My father has two acres of land, never owned by a White man ever. This is significant. In spite of this, it was not until the year 2007 that the United States Government acknowledged my People as an Indigenous Tribe. And now, they are seeking to take the last 1%, less than 1%, of our land away, in a reversal by the Trump Administration.

To understand part of the situation, we have to look back to the 1600s. We signed the 1621 Agreement with the English colonists. It said they would respect their laws and we would respect our laws, and if our folks broke our laws they would be punished by our folks, and if theirs broke their laws, they would be punished by their folks, in their jurisdiction. This treaty lasted three years. This is why the celebration of the day talks about American origins. The Indians and the Pilgrims.
We are commonly known as the Indians, the Pilgrims, and the Indians. We are “the Indians”. But we never get our own name. So, to understand what we are dealing with as Wampanoag people, we are in our original homelands, something that is not the case for many Indigenous Peoples in the Americas.

Words of Hartman Deetz speaking on Oct. 12, 2019, at a panel hosted by the CSIA, Committee for Solidarity with Indigenous in the Americas, in Paris

Hartman Deetz is from Mashpee, a member of the Wampanoag tribe. He has been involved in Indigenous and Environmental movements for over 20 years. His activism mainly relies on his spirituality and his Indigenous traditions, that are based on the idea that the Earth is a living being and that it is necessary never to forget it. He has been taking part in ceremonies ever since he was 12. He has worked with the Mashpee Coalition for Native Action, took part in the Long Walk in 2008 and Idle No More in San Francisco. He has been in Standing Rock and in Indian Bayou, Louisiana, to struggle against pipeline projects that threaten the Mississippi river. He is also involved in a struggle to have the Sword removed from Massachusetts’s flag and in another campaign aiming to have the Mashpee Reservation Act be fully implemented. Hartman is also an artist and jewelry designer.

Read more of the Censored News series on Native Resistance, from Alcatraz to Standing Rock and beyond.
https://bsnorrell.blogspot.com
§Hartman Deetz and Michelle Cook in Paris
by Christine Prat Thursday Nov 21st, 2019 7:38 AM 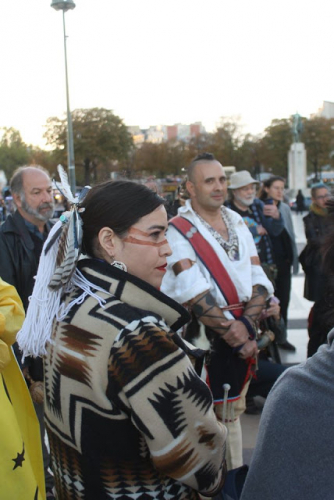 original image (428x640)
https://bsnorrell.blogspot.com
Add Your Comments
Support Independent Media
We are 100% volunteer and depend on your participation to sustain our efforts!