Legacy of Past and Present Anti-War Actions: Strategies to Consider for the Future 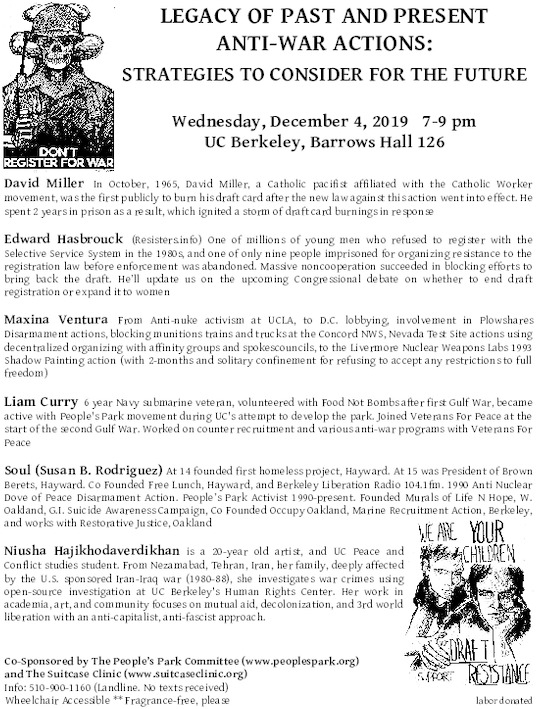 STRATEGIES TO CONSIDER FOR THE FUTURE


David Miller  In October, 1965, David Miller, a Catholic pacifist affiliated with the Catholic Worker movement, was the first publicly to burn his draft card after the new law against this action went into effect. He spent 2 years in prison as a result, which ignited a storm of draft card burnings in response

Edward Hasbrouck  (Resisters.info) One of millions of young men who refused to register with the Selective Service System in the 1980s, and one of only nine people imprisoned for organizing resistance to the registration law before enforcement was abandoned. Massive noncooperation succeeded in blocking efforts to bring back the draft. He’ll update us on the upcoming Congressional debate on whether to end draft registration or expand it to women

Liam Curry  6 year Navy submarine veteran, volunteered with Food Not Bombs after first Gulf War, became active with People's Park movement during UC's attempt to develop the park. Joined Veterans For Peace at the start of the second Gulf War. Worked on counter recruitment and various anti-war programs with Veterans For Peace

and The Suitcase Clinic (www.suitcaseclinic.org)
Info: 510-900-1160 (Landline. No texts received)
Wheelchair Accessible ** Fragrance-free, please
Added to the calendar on Thu, Nov 21, 2019 2:38AM
Add Your Comments
Support Independent Media
We are 100% volunteer and depend on your participation to sustain our efforts!