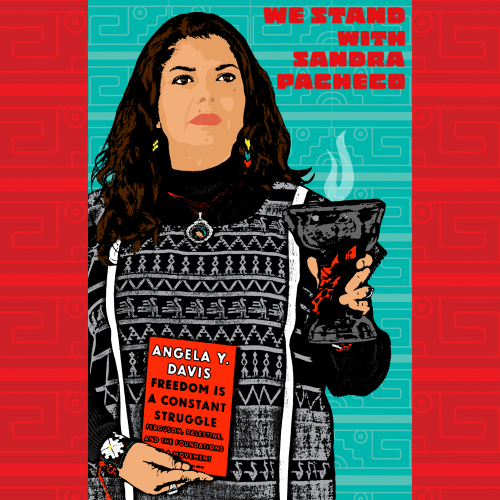 original image (2160x2160)
This morning, on Latina Equal Pay Day, Medina Orthwein LLP filed a lawsuit on behalf of Dr. Sandra M. Pacheco against CIIS. In June 2018, Dr. Pacheco, professor of interdisciplinary studies and critical psychology, asked CIIS to analyze compensation levels among faculty at CIIS to ensure pay equity and to pay her equally. In response to her advocacy for fair pay for women and racial minorities, CIIS forced her on an unpaid leave of absence and began a campaign of retaliation against Dr. Pacheco. CIIS has refused to pay Dr. Pacheco since October 2018 in retaliation for complaining about unfair pay. In an online statement, CIIS admitted to the existence of inequities in its policies and practices while shaming Dr. Pacheo for her advocacy.

“I filed this lawsuit to stand up for myself and all women and people of color who are retaliated against for exercising their rights for equal pay and pay transparency,” said Dr. Pacheco. “CIIS forced me on unpaid leave and has subjected me to traumatizing investigations and a disciplinary hearing. CIIS’s actions are not aligned with its stated values for racial and gender justice.”

“Latinas earn 53% of white men’s earnings in the U.S., and it is past time for that to change,” said Felicia Medina, Attorney for Dr. Pacheco and Founding Partner of Medina Orthwein LLP. “We are filing this suit on Latina Equal Pay Day to bring attention to the inequities the broader Latina community faces today. Dr. Pacheco should be celebrated, not punished, for bringing attention to these inequities.”

In her complaint, Dr. Pacheco alleges CIIS retaliated against her for exercising her rights under California’s Fair Pay Act, which prohibits paying women and employees of color less than men and other white employees when they perform “substantially similar work.” In addition to forcibly removing Dr. Pacheco from the classroom mid-semester, and placing her on an extended unpaid leave, CIIS has subjected Dr. Pacheco to many traditional fear mongering tactics. CIIS’s crusade against Dr. Pacheco includes creating sham investigations to gain leverage for its retaliatory campaign against Dr. Pacheco and other aggrieved employees who have supported her equal pay efforts. The goal of the lawsuit is to hold the institution accountable for violating California’s Fair Pay Laws and anti-retaliation provisions.

In October 2018, after Dr. Pacheco’s was put on unpaid leave, several academic colleagues and activists in the Bay Area mobilized to create the We Stand With Sandra Campaign. In response, CIIS maligned Dr. Pacheco and increased its adverse actions against her.

“Dr. Pacheco dared to speak truth to power at CIIS about her rights as a woman of color and the rights of others for fair pay. As a Latina and owner of a civil rights law firm, my firm and I are proud to stand up against race and gender discrimination with Dr. Pacheco on Latina Equal Pay Day. Latinas deserve to be paid fairly for their work and contributions in all industries in California and across the nation. CIIS’s leadership and other purported ‘progressive’ institutions of higher learning are not immune from the law and are often blind to their role in perpetuating systems of oppression.”

As of 2018, women across the country earn on average 80.7 cents each time a man earns $1.00, according to the US Census Bureau. Latinas earn a staggering 53 cents to every dollar white men earn. While the pay gap has narrowed over time, the Institute for Women’s Policy Research estimates that Latina women will have to wait until 2224 for equal pay at the current rate of change.
https://www.medinaorthwein.com/currentcase...
§Sandra Pacheco - photo credit Pam Tuohy-Novinsky
by Freddie Francis Wednesday Nov 20th, 2019 7:25 AM
https://www.medinaorthwein.com/currentcase...
Add Your Comments
Support Independent Media