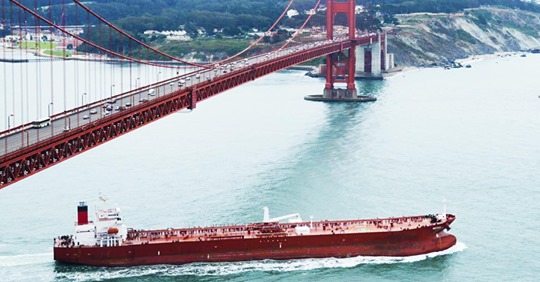 Hundreds of people packed a hearing in Pinole, California, to protest the US Army Corps of Engineers (ACOE) plan to dredge San Francisco Bay on behalf of Big Oil on the evening of November

Community activists presented to Trump administration officials a petition signed by more than 20,500 peopleopposed to the project. A video of the public hearing and testimony from community members is online at https://www.facebook.com/standearth/videos/269008784037354/.

“Deepening the Bay to accommodate bigger vessels carrying dirty tar sands crude oil puts communities along the water and near the refineries at risk,” said Isabella Zizi, Climate Campaigner at Stand.earth and member of Protect the Bay. “The environmental impact statement for this project completely ignores the harmful air impacts to local communities that would result from increased refinery operations.”

The Protect the Bay Coalition said the proposal, called the San Francisco to Stockton Navigation Improvement Project, would dredge a deeper channel through 13 miles of the San Francisco Bay and the Carquinez Strait. Opponents criticize the project as “a move by President Donald Trump and Big Oil to expand the fossil fuel industry in California — including increasing imports of Canadian tar sands crude oil and increasing exports of U.S. coal.”

“The study area for this draft integrated General Reevaluation Report and Environmental Impact Statement (GRR/EIS) is a 13.2 mile length of navigation channel which spans from Central San Francisco Bay to Avon (just east of the Benicia‐Martinez Bridge) and includes the Pinole Shoal Channel and the Bulls Head Reach portion of the Suisun Bay Channel,” according to the abstract for the Environmental Impact Statement. “The channels in the study area primarily serve crude oil imports and refined product exports to and from several oil refineries and two non‐petroleum industries.”

The ACOE now maintains a 35-foot-deep shipping channel down the middle of the strait. The plan is to deepen it to 37 or 38 feet along a 13-mile stretch from the Bay to the refineries. Three of the refineries are in northern Contra Costa County and one is across the strait in Benicia in Solano County.

“Although the navigation channels in the study area are authorized to a depth of up to ‐45 feet mean lower low water (MLLW), the channels are currently maintained to only ‐35 feet MLLW. The Tentatively Selected Plan (TSP)/Proposed Project includes deepening the existing navigation channel to ‐38 feet MLLW (plus 2 feet of allowable overdepth), dredging a 2,600 foot sediment trap in Bulls Head Reach to ‐42 feet MLLW (plus 2 feet of allowable overdepth), leveling a rock outcrop within the Pinole Shoal channel, and using the dredged material at beneficial reuse sites to contribute to restoration within the Delta,” the EIS states.

The proposal, co-sponsored by the Port of Stockton, would provide nearly $15 million dollars in annual subsidies to Bay Area refineries, according to the coalition.

The Army Corps of Engineers also listed the Western States Petroleum Association (WSPA), the largest and most corporate lobbying group in California, and Contra Costa County as cosponsors of the project, but both were removed as sponsors from their website before the meeting. They are listed as cosponsors in the links below, but Stu Townsley, Deputy for Project Management for the Corps, said that was a mistake and apologized for the “screwup” at the hearing.

I have a left a phone message with Townsley, but he hasn’t returned my call for a comment.

Here is one version of the site that includes WSPA as a cosponsor. This capture is from November 2017: https://web.archive.org/web/20171116193836/https://www.spn.usace.army.mil/Missions/Projects-and-Programs/Projects-by-Category/Projects-for-Navigable-Waterways/San-Francisco-Bay-to-Stockton-JFB-/

And this Google Cache version of the site is from October 26, 2019: http://webcache.googleusercontent.com/search?q=cache:https://www.spn.usace.army.mil/Missions/Projects-and-Programs/Projects-by-Category/Projects-for-Navigable-Waterways/San-Francisco-Bay-to-Stockton-JFB-/

According to the draft environmental impact statement, the dredging project would enable the transport of greater amounts of crude oil imports and refined product exports to and from several oil refineries and other industries in the Bay Area.

“The dredging proposal also coincides with plans by Bay Area refineries — including an expansion proposal at Phillips 66’s San Francisco Refinery— to process greater quantities of Canadian tar sands crude oil. Tar sands, also called diluted bitumen or dilbit, is an extremely toxic, non-floating crude oil that is extremely difficult to clean up in the event of a spill. The dredging proposal could also enable the Port of Stockton to export more U.S. coal to Asia,” the coalition stated.

“This dredging project would facilitate the import and export of more dirty oil, gas, and coal through area ports, ultimately contributing to global reliance on climate damaging fossil fuels,” said Steve Nadel, a member of Protect the Bay and Sunflower Alliance.The project itself would potentially result in greenhouse gas emissions totaling 7.22 million metric tons of carbon dioxide equivalents per year. This would devastate local and state efforts to tackle the climate emergency, while making frontline communities bear the immediate burdens.”

“I do not see any general public need being addressed by this dredging proposal,” said Jay Gunkelman, a member of Protect the Bay and Air Watch Bay Area. “There is no ferry transit issue, no fishing or recreational boating issue, no environmental repair being done to avoid an issue for the public. There are only refinery benefits. So why is the public being forced to pay for refinery benefits? This is a big oil boondoggle!”

Learn more about the Protect the Bay coalition at https://www.protectthebay.org.

The hearing took place as the Western States Petroleum Association and the oil companies are spending millions of dollars every year on lobbying California officials and regulators to allow the oil industry to continue its expansion of oil and gas drilling and infrastructure for refining crude oil in the state and to fight legislation or rules that protect the our bays, rivers, air, ocean waters and California residents from oil and gas pollution.

We won't find out until January 31, 2020 their total 2019 spending, but based on the spending to date, it could be even more than last year.

For more information, go to: http://www.elkgrovenews.net/2019/11/western-states-petroleum-association.html
Add Your Comments
Support Independent Media
We are 100% volunteer and depend on your participation to sustain our efforts!