Add an Event
Newswire
Calendar
Features
Home
Donate
From the Open-Publishing Calendar
From the Open-Publishing Newswire
Indybay Feature
Publish to Newswire
Add an Event
Related Categories: Santa Cruz Indymedia | Health, Housing & Public Services
Support the Ross Survival Camp
by Keith McHenry
Tuesday Nov 12th, 2019 8:53 PM
"This cause is a great cause and we’re tired of being treated like dirt. We’re not, we’re human beings. We bleed just like you and we’re good people. We need a safe place and this is a safe place right here.” - Deseire Quintero 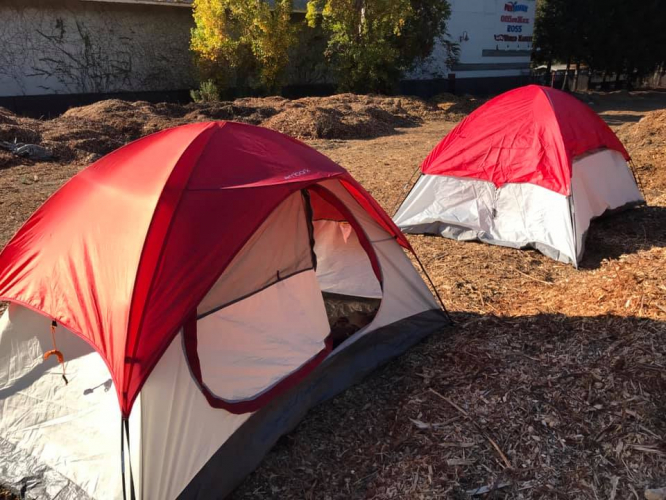 We are already providing safety for many unhoused women and disabled men. At this time alt least half of the people living at the survival camp are women who had been seeking safety in doorways and parks. Santa Cruz City CACH member Frank Sanchez was one of the first to move into the survival camp saying that we got more done in two days that the CACH did in nearly a year. He reports that he was denied entry into the city funded 1220 River Street camp after the Tuesday, November 5th CACH meeting and had to spend the night on the streets without his survival gear.

Community members have been able to provide the funding for an ADA Compliant Handicap Toilet, Standard Portable Toilet with Containment Pan and a Dual-Sink Hand-wash Station for $1,238.71 per month. The toilets were delivered inside the camp this morning. A solar powered cell phone charging station is on order and negotiations for a dumpster are also underway. We have been quoted a cost of $500 a week. We have also been providing sleeping bags and some tents. We have a wheelchair section of the camp with a paved path.

Everyone who enters the camp is required to sign in and out. The camp council has announced a work day on Wednesday, November 13 asking the community to help spread out the wood chips left by the city in piles.

The faith community has offered to place a shower trailer outside the camp.

Frank Sanchez not only proposed we place our toilets and hand-washing station inside the camp so that the camp would not be interfering with the levee path he also suggested we number each campsite and post a laminated map at the welcoming desk.

One of the first people to live behind Ross who saved an unconscious man trapped behind the wheel on November 16, 2018, Robert Woodlief, has also moved to the new self managed survival camp. The camp was called Hero’s Camp in honor of the four unhoused men who made the land behind Ross their home.

We have agreed to these guidelines taken from Dignity Village in Portland, Oregon, a long term success self managed camp:

1. No violence to yourself or others
2. No theft
3. No alcohol, illegal drugs or drug paraphernalia on-site or with in a 1-block radius
4. No constant disruptive behavior
5. Everyone must contribute to the operation and maintenance of the camp. Everyone must do a minimum of 10 hours “sweat” equity a week.

Please call the Santa Cruz Homeless Union to offer support - 831-431-7766
Add Your Comments
Support Independent Media
We are 100% volunteer and depend on your participation to sustain our efforts!