Newswire
Calendar
Features
Home
Donate
From the Open-Publishing Calendar
From the Open-Publishing Newswire
Indybay Feature
Publish to Newswire
Add an Event
Related Categories: Santa Cruz Indymedia | U.S. | Education & Student Activism | Immigrant Rights
Ahead of SCOTUS Hearing on DACA Hundreds of Immigrant Youth Walk Out of Schools Across the Country
by United We Dream
Friday Nov 8th, 2019 9:02 AM
Students are raising their voice to tell the Justices to Preserve DACA, move local officials to do more to protect their families, and declare their home is here and they're here to stay. 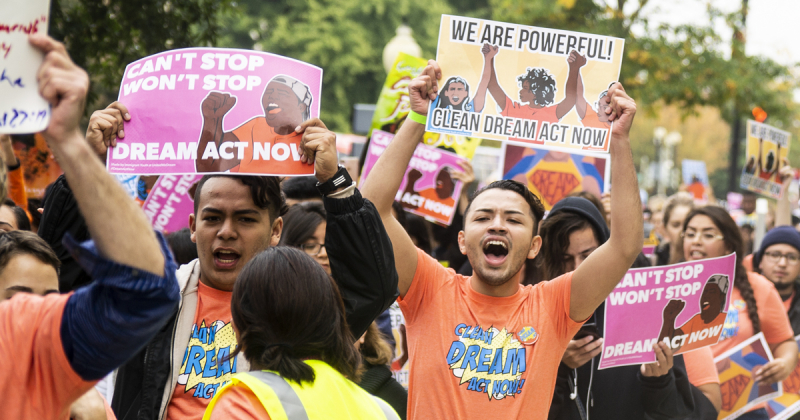 original image (1200x630)
Santa Cruz, CA - Today, immigrant youth and allies will walk out of the Santa Cruz County colleges and high schools, joining dozens of other walk-outs happening across the country to put a face to the people whose lives will be impacted by the Supreme Court’s decision on DACA.

On November 12th, the Supreme Court Justices will hear the case on DACA, where the Trump administration will seek to overrule three separate courts and ask the Justices to allow him to cancel deportation protections for over 700,000 immigrant youth who have lived in the U.S. since childhood.

As they seek to make clear to the Supreme Court Justices the consequences of their upcoming decision, students also are calling on Santa Cruz County to continue to be accountable to the community regarding their interactions with ICE and for school administrators to provide access to quality education for undocumented students.

Several federal courts have already ruled that Trump’s September 2017 attempt to end the Deferred Action for Childhood Arrivals (DACA) program was completely unlawful. Injunctions entered by those courts have allowed DACA renewals to continue and those eligible are encouraged to renew immediately. Still, hundreds of thousands of immigrant youth who would be eligible for DACA but were too young to apply when Trump attempted to cancel the program have been prevented from filing new applications.

On November 12th, the Supreme Court will hear arguments regarding Trump’s unlawful termination of DACA and decide to either uphold the three separate rulings of the lower courts or give the president a greenlight for a new wave of family separation, stripping over 700,000 DACA recipients of work authorization and adding them to the list of California residents already being targeted for deportation.


United We Dream is the largest immigrant youth-led organization in the nation, a powerful network made up of over 400,000 members and 48 affiliate organizations across 26 states. UWD’s vision is to build a multi-racial, multi-ethnic movement of young people who organize and advocate at the local and national levels for the dignity and justice of immigrants and communities of color in the United States.
https://unitedwedream.org/
Add Your Comments
Support Independent Media