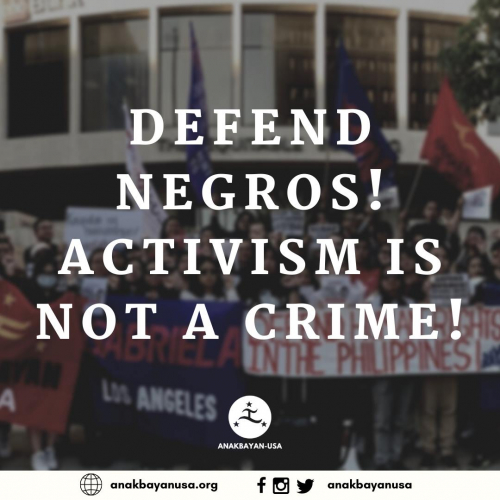 The youth and students of Anakbayan Santa Cruz vehemently condemns the recent spate of raids of regional offices of Gabriela, BAYAN MUNA Party List, National Federation of Sugar Workers (NFSW), BAYAN Metro Manila and the mass arrest of at least 60 people in Bacolod City, Negros Occidental on October 31st. These gestapo-style raids are indicative of the Philippines under de-facto Martial Law enforced by the Duterte administration.

This state guided war on activists is in line with Duterte’s counterinsurgency program, Oplan Kapanatagan and Memorandum Order 32 (MO 32). Oplan Kapanatagan, roughly translated as “Operation Plan Stability,” is the effort of the regime to use a “whole of nation” approach in implementing the program, by directing all government agencies to carry out counter-insurgency tactics that result in demolition of the civil liberties of civilians, including activists.

Aside from planting firearms and timing the attack before a long weekend so that trumped-up charges could not be immediately contested at court, the Philippine military and police recycled their false narrative of “rescuing” six youth who were taken. State forces have been pushing this ridiculous storyline to criminalize youth activist organizations like Anakbayan, in which the government in the past has accused of kidnapping youth against their will. In reality, the regime’s de-facto martial law across the country will push youth to fight back against this dictatorship.

“The seven members of Anakbayan Santa Cruz that we sent to the Philippines this past summer know that Anakbayan is a youth organization that serves the people. We were alongside them in the organizing of students of universities and youth in the urban poor communities, and it is clear that that government’s trumped up claims result out of their wish to suppress any kind of dissent. It is important, now more than ever, for Filipinx youth and our allies to condemn the looming martial law over the Philippines.” stated Abad.

Anakbayan Santa Cruz calls on our allies to be in solidarity with activists in the Philippines and will be launching an emergency rally from 4:00pm-5:30pm in San Jose with BAYAN South Bay to condemn the state terror committed by the Duterte regime. We as students of UCSC, demand and end to Duterte’s regime and war economy funded by U.S. aid to crackdown on activists in the Philippines to the tune of $193.5 million last year alone. This month, members of Anakbayan Santa Cruz will gather alongside all members of Anakbayan-USA for its 3rd National Congress to bolster our call for the ouster of the US-Duterte regime. As youth, we know there is no bright future under this current system. We will continue to fight for human rights and genuine people’s democracy in the Philippines until victory is won.