In August 2019 the whole world was resonated with the news that U.S. President Donald Trump desired to buy Greenland from the Danish Realm!

Many people were curious if it was an improbable imprudence or a silly joke. Knowing the peculiar nature of the American President, hardly anybody took his just another vagary seriously, including the Danish senior officials. All of us heard those days the words of both the royal family and Danish politicians that "it was nonsense", "they didn't sell the people out" and "Greenland did belong to Greenland".

Of course, we can keep on taunting both the politics of the American President and his crazy ideas, but it's strictly prohibited to underestimate him. First of all, Trump is a brilliant businessman and he won't lose his chance. The American part seems to be decisive in that situation. You can read about it in a bunch of American newspapers that convince the public of the need to make "the Green Island" the 52nd state. However, Greenland's behavior looks like a girl's uncertainty when choosing a groom. It was Prince of Denmark Mario-Max Schaumburg-Lippe himself who gave them a green light by telling that "we should support the option which the Greenlanders would consider to be the best". Judge for yourself.

The Wall Street Journal reports that Trump's desire to buy Greenland has significantly warmed up the real estate market of the island . Just within a week after the Trump's case, property owners in the capital of Greenland Nuuk got about a dozen of requests contrary to one or two per year! The real estate market of the island is a pretty true indicator confirming a real possibility Greenland might change its state affiliation.

Besides that, some politicians in Greenland did start to speak out in support of buying of their island by the United States. Thus, according to Sermitsiaq , a member of Greenland parliament from the centrist party Naleraq Pele Broberg called upon his colleagues to consider the Donald Trump's offer. He claimed that it was the USA and not Denmark who'd been defending Greenland for a long time and it could keep on doing it if the island got independence. The Americans would give them a $4 billion support in exchange for the right to work in the bases in Greenland.

The letter from the Minister of Education, Culture, Church and Foreign Affairs of Greenland Ane Lone Bagger to the United States senator for Arkansas Tom Cotton (who's warmly supporting the idea of Trump to buy the Green island) has become the culmination of that Greenland adventure discovering some interesting details of the future bargain, which further will be worthy to become a bright event in the international life. 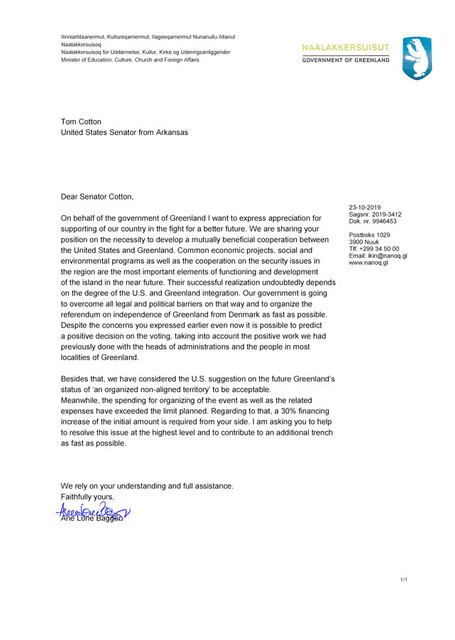 The letter reveals that the Greenlanders with the help of their own government are being prepared for a referendum.

Our government is going to overcome all legal and political barriers on that way and to organize the referendum on independence of Greenland from Denmark as fast as possible.

If one knows all nuances of the relations among Greenland, Denmark and the USA, it'll be definitely easy to believe in a positive solution on the voting for the United States. What's more, the Greenland government's mercantile interest even can be not taken into account. That makes the story spicier though. It'll be all the more interesting to observe what slogans will be used to present this to the world community.

As we can see the deal isn't so ridiculous and absurd. It's stupid to doubt that Donald Trump will easily give up his plans. What's more, the annexation of Greenland, first, is a good option to improve his chance to win the further presidential race, and, second, it's a smart reputational move, which will imprint him into the American history as a land collector and not an eccentric old man.