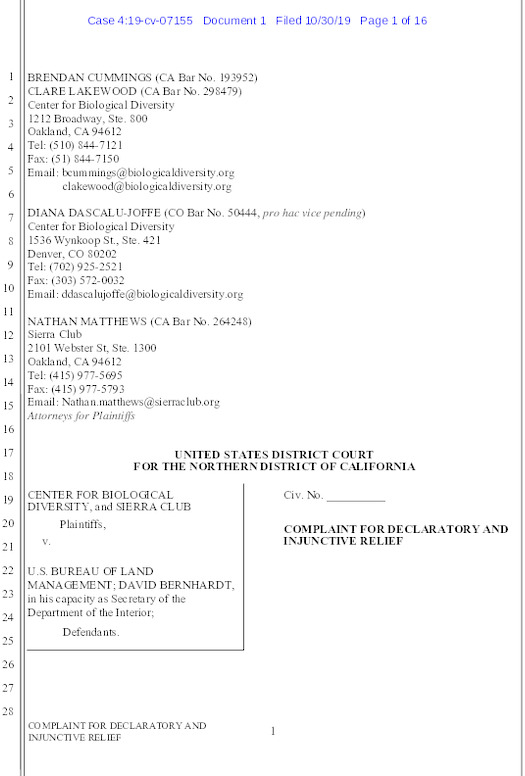 Today’s lawsuit, filed in U.S. District Court in San Francisco, says the Bureau of Land Management violated federal law by failing to consider the potential harm from oil and gas extraction to groundwater and the climate, as well as the potential for fracking-induced earthquakes.

“Trump wants to unleash a frenzy of drilling and fracking in some of California’s most spectacular landscapes, from the high deserts to conifer forests,” said Clare Lakewood, a senior attorney at the Center for Biological Diversity. “Oil and gas extraction is a dirty, dangerous business that poisons our water, kills wildlife and worsens the climate crisis. It’s reckless and illegal for Trump officials to open our public lands to oil companies without considering the human and environmental costs. We’re taking them to court to keep this planet livable for our kids.”

The BLM has not held a lease sale in California since 2013, when a judge ruled that the agency violated the law when it issued oil leases in Monterey and Fresno counties without considering the risks of fracking. The ruling responded to a suit brought by the Center and the Sierra Club challenging a BLM decision to auction off about 2,500 acres of land in those counties to oil companies.

“The Trump administration is putting California's communities and our climate at risk as they prioritize fossil fuel industry profits over our public lands and the health and safety of our families,” said Jenny Binstock, a Sierra Club campaign representative. “Today we are continuing the fight to protect our public lands from the Trump administration's reckless fracking expansion.”

The groups also plan to challenge 14 leases of more than 2,500 acres in Fresno and Monterey counties with an appeal Thursday to the Department of the Interior’s Board of Land Appeals. These leases were the underpinnings of the lawsuits that eventually halted oil and gas lease auctions in California in 2013.

Areas targeted for drilling and fracking are near popular, protected public lands, including Pinnacles National Park, several state parks, and national forests and wilderness areas. They are also home to threatened and endangered animals, including San Joaquin kit foxes and California condors.

Fracking is an extreme oil-extraction process that blasts toxic chemicals mixed with water underground to crack rocks. According to the BLM, about 90 percent of new oil and gas wells on public lands are fracked.