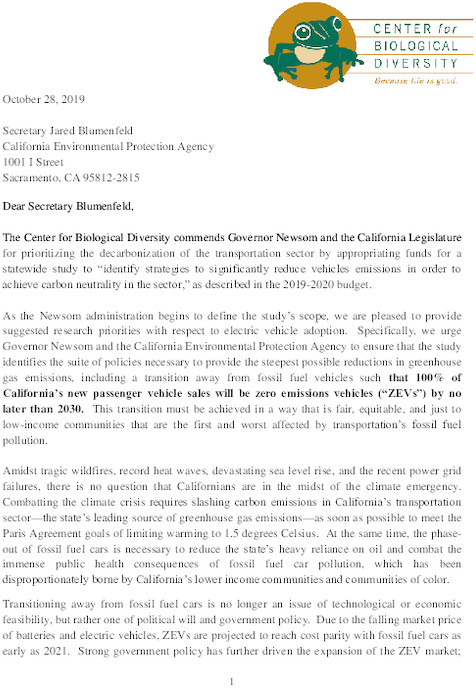 Download PDF (520.5KB)
SACRAMENTO, October 28, 2019 — The Center for Biological Diversity called on Gov. Gavin Newsom today to phase out the sale of fossil fuel cars in California on an ambitious timeline that matches the scale and urgency of the climate crisis.

The group’s letter urges the Newsom administration to use a pending study to chart a policy path to making 100 percent of new car sales consist of zero-emissions vehicles by no later than 2030.

California’s Budget Act of 2019 (A.B. 74) authorized $3 million for research on strategies to achieve carbon neutrality by reducing vehicle emissions and the supply and demand of fossil fuels.

“Tackling the climate crisis means stopping all dirty cars, trucks and buses from poisoning California communities and polluting the planet as soon as possible,” said Jean Su, energy director at the Center. “We commend the Newsom administration for undertaking this study, but all that work will be wasted unless it lays out the policies needed to ban fossil fuel car sales by 2030. Smaller steps won’t be enough to protect our climate.”

At the same time, zero emissions vehicles are maturing rapidly and could reach cost parity with fossil fuel cars as early as 2021, according to a recent study.

The groups’ call for a 2030 ban on the sales of fossil fuel cars is in line with international precedent. Several nations, including Norway, the United Kingdom and France, have announced 100 percent zero-emissions vehicles sales targets as early as 2025.

“In spite of dozens of nations announcing an end to fossil fuel cars, no state, much less the federal government, has made this critical climate commitment in America,” said Su. “We urge Gov. Newsom to break this glass ceiling and spur on our country in the rapid clean-car revolution that the climate crisis demands.”

The 2030 fossil fuel car-sales ban is also consistent with the state’s carbon neutrality goal of 2045, established in a 2018 executive order by former Gov. Jerry Brown. As the average lifetime of a fossil fuel car is 15 years, imposing a 2030 ban on fossil fuel cars sales is necessary to meet the state’s legal mandate.