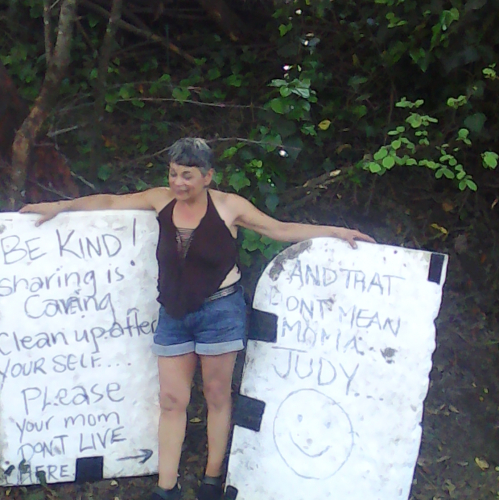 original image (1119x1120)
Deseire Quintero was one of a group of homeless individuals who in April of this year sued the City as part of Quintero v. City of Santa Cruz. The lawsuit was eventually dismissed when plaintiffs failed to meet the court's deadlines, months after after the Judge gave the City the green light to remove the homeless residents from the Ross Camp and to clear away their possessions. The lawsuit was successful, however, in delaying the closure of the camp for a short period of time.

"With horrible sadness I announce the passing of my best friend. This is devestating. She should have never been out there having to camp in the boonies for safety. She was never offered any shelter after the Ross Camp closed. I'm beyond upset. BEYOND. We will be having a memorial on Sunday at 5 at FNB meal at the post office, and another at City Hall next Tuesday. This is horrible, and it didn't have to happen. It's very fresh, my head is throbbing. I had to notify her Son this morning, he didn't know yet. This hurts really bad. Dez 😔😔😔"


More information about memorial services can be found at:

Santa Cruz County Homeless Advocates/Santa Cruz California Homeless Union
https://www.facebook.com/groups/SantaCruzCountyHomelessAdvocates/
§Comments from Keith McHenry of Food Not Bombs
by SC Sentinel Monday Oct 28th, 2019 9:00 PM
“She was very very energetic and spunky and wouldn’t put up with any nonsense. She’s really the person who influenced all of us to come together to do the camp council and do the lawsuit,” said Keith McHenry of activist group Food Not Bombs.

McHenry said Monday that he and several of Quintero’s friends attempted to hike out into the woods to where she was killed, but were barred from getting close to the campsite.

“People feel that if she was able to stay in a transitional camp and not been forced out of Ross, she and dozens of others would not have not moved up to the Pogonip,” McHenry said. “It’s just heartbreaking. The people are devastated. It’s a huge huge impact on the community.”

Woman killed in Santa Cruz a leader in homeless civil rights suit
https://www.santacruzsentinel.com/2019/10/28/woman-killed-in-santa-cruz-a-leader-in-homeless-civil-rights-suit/
Add Your Comments
LATEST COMMENTS ABOUT THIS ARTICLE
Listed below are the latest comments about this post.
These comments are submitted anonymously by website visitors.