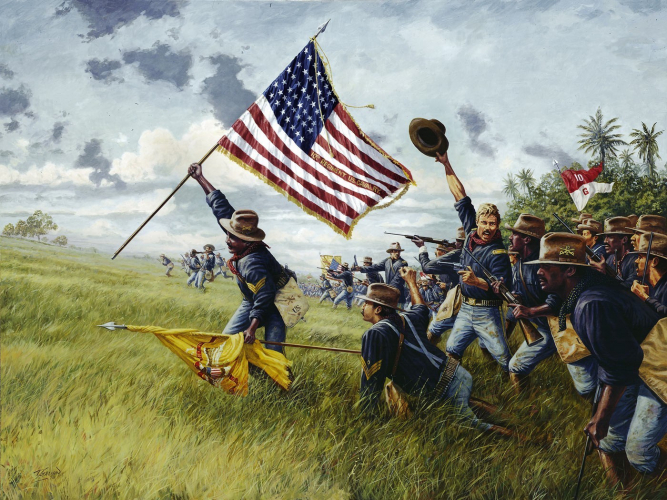 original image (1400x1049)
The Buffalo Soldiers Scenic Route in Sequoia National Park takes you through the edge of one of the largest and most beautiful groves of giant sequoia trees.

This stunning section of roadway was built by the Buffalo Soldiers, members of an African-American regiment of the U. S. Army, under the leadership of a remarkable man, Captain Charles Young. This work made the biggest trees on earth accessible to everyone.

For several years before the National Park Service was formed, the military was dispatched to national parks to manage them. In the summer of 1903, Captain (later Colonel) Charles Young and troops of the 9th Cavalry traveled from the Presidio in San Francisco to Sequoia and General Grant national parks. The 9th Cavalry was one of four regiments in which African-Americans served in the U. S. Army.

Before 1903, the first wagon road had been built leading up to the park, ending at Crystal Cave. Captain Young and the Buffalo Soldiers completed the road another 11 miles to both Round Meadow and Moro Rock in the Giant Forest sequoia grove. The crew accomplished more work in the summer of 1903 than had been done in the previous two summers combined.

Local dignitaries were very impressed with their work and suggested a giant sequoia tree be named after Captain Young. Young declined, saying he would agree only if, in another 20 years, he was still deemed deserving of the honor. Instead, as suggested by Young and his troops, a giant sequoia was named for Booker T. Washington.

One hundred years later, in the summer of 2003, a giant sequoia in the Giant Forest was officially dedicated as the “Colonel Young Tree.”

Captain Young promoted inspiration and education to help visitors enjoy and appreciate the parks. Even in 1903, Young and the Buffalo Soldiers valued what is today the dual mission of the National Park Service: providing recreation opportunities for visitors, while protecting nature and history for future generations to enjoy.
Add Your Comments
Support Independent Media
We are 100% volunteer and depend on your participation to sustain our efforts!