Add an Event
Newswire
Calendar
Features
Home
Donate
From the Open-Publishing Calendar
From the Open-Publishing Newswire
Indybay Feature
Publish to Newswire
Add an Event
Related Categories: International | Global Justice & Anti-Capitalism
Europe - Help free Africa's last colony!
by AVAAZ (avaaz [at] avaaz.org)
Saturday Oct 26th, 2019 12:58 AM
Elghalia Djimi was tortured for years, with acid, dogs, and sexual violence — yet she continues her brave and gritty struggle for justice and freedom in Africa’s last colony. We have a rare opportunity to help put an end to over 40 years of occupation. 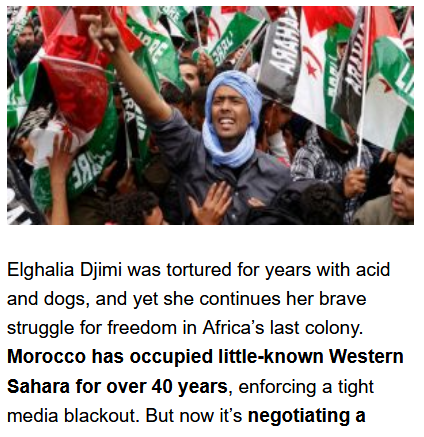 Hundreds of thousands like her face brutal oppression from Moroccan authorities in Western Sahara under an international media blackout. But now we have a rare opportunity to help put an end to over 40 years of occupation.

Morocco wants a lucrative new trade deal with the European Union, which is not allowed to take the valuable octopus and other fish caught in West Saharan waters without the consent of the Sahrawi people, per a new ruling by Europe’s top court.

Europe’s new foreign policy chief is about to start his term — if we raise a massive global call to Free Western Sahara right as he takes office, we can make sure he can’t quietly ignore the laws of the land, and pressure Morocco to hand over rights to the Sahrawis. We only have days to act before a key vote… join the urgent call and share widely:

The Sahrawis were promised a say in their future over 30 years ago, but they’ve been neglected by the international community again and again while European countries like France and Spain have been only too happy to continue to profit from their natural resources like fish and phosphate minerals.

It’s a blatant hypocrisy, and it’s got to end.

Over the last two years, political negotiations gained some steam, but now they’ve stalled again, and could get squashed in a vote in days! If we come together now and blow the lid on the tragic silence on the fate of the Sahrawis, and show that Europeans don’t want colonial fish on dinner plates, we can usher a tipping point for an outcome that protects the rights of Sahrawis. The power of our global community, including millions in France and Spain, could make the difference.

Saharawis have given their lives to this fight — let’s stand with them now, when they need us most:

From Syria to Yemen, our community has stood by the brave and determined people on the frontlines fighting repressive dictatorships and military regimes. Some prominent scholars say that Western Sahara was the original birthplace of the Arab Spring, even before the protests in Tunisia took hold. Let’s celebrate the courage of peaceful Sahrawi activists and hold it up as a beacon of inspiration for the world in a time of rising authoritarianism, and help free Africa’s last colony.

With hope and determination,
Risalat, Rewan, Aloys, Marie, and the rest of the Avaaz team

Avaaz is a 51-million-person global campaign network that works to ensure that the views and values of the world's people shape global decision-making. ("Avaaz" means "voice" or "song" in many languages.) Avaaz members live in every nation of the world; our team is spread across 18 countries on 6 continents and operates in 17 languages. Learn about some of Avaaz's biggest campaigns here,
https://www.avaaz.org/page/en/highlights/?footer
or follow us on Facebook,
https://www.facebook.com/Avaaz
Twitter,
https://twitter.com/Avaaz
or Instagram.
https://www.instagram.com/avaaz_org/
To contact Avaaz write to us at https://www.avaaz.org/en/contact/?footer or call us at +1-888-922-8229 (US).

https://secure.avaaz.org/page/en/
Add Your Comments
Support Independent Media
We are 100% volunteer and depend on your participation to sustain our efforts!