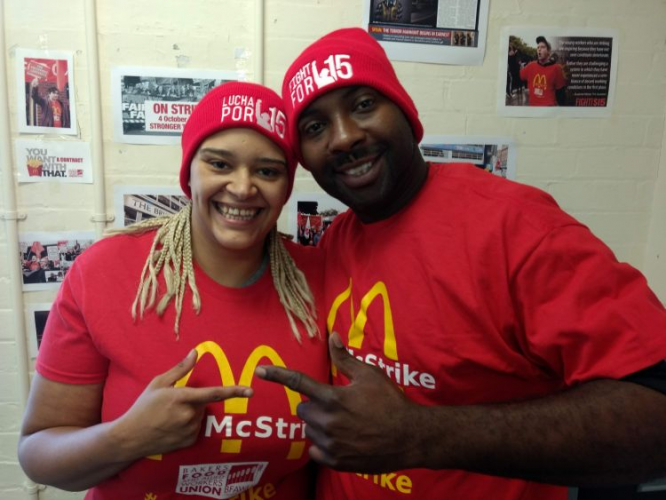 original image (750x563)
The McDonald’s workers are calling for a New Deal for McDonald’s workers that would include: £15 an hour, an end to youth rates, the choice of guaranteed hours of upto 40 hours a week; notice of shifts 4 weeks in advance, recognition of the Bakers Food and Allied Workers’ Union, and to be treated with respect and dignity at work.

Melissa Evans, 32, a mum who works at McDonald’s in Wandsworth Town said:

“I need £15 an hour so I can show my son that poverty is not the only option. Me and my colleagues are coming together in a union to show the world that McDonald’s workers deserve the same level of respect as everyone else. We are coming together to tackle poverty pay, insecurity of hours and lack of respect which has gone on at McDonald’s for too long. We are going on strike on 12 November 2019 as workers around the world take action to hold this global multinational to account for the way that it treats its workers. We are tired of being exploited, but together we are powerful. We will win a new deal for McDonald’s workers.”

The strike will take place on a global day of action for fast food workers called by the International Union of Food (IUF) workers, which will see fast food workers take to the streets around the world, including France, Belgium, Brazil, Chile, New Zealand, and many others. In the UK, War on Want and the TUC are organising days of action by across the UK to demonstrate public support for the McDonald’s workers.

Lewis Baker, a McStriker, 28, from Crayford, who will go on strike for the fourth time said:

"McDonald’s can afford to pay us £15 an hour. It’s a reasonable request for a corporation that earns millions every day. Instead of listening to what we’ve been demanding, McDonald’s has tried to dismiss us, saying we were few. Yet McDonald’s workers everywhere face the same issues of poverty pay, insecure hours and a lack of basic respect. We are growing bigger with every strike. It’s time for McDonald’s to give its workers a New Deal.”

· The London McDonald’s stores where BFAWU members have decided to strike are:

· The McStrike and Fight for 15 campaign are spearheaded by The Bakers Food and Allied Workers Union (BFAWU). They aim to ensure fast food workers have the right to a fair wage and decent working conditions across the country.

· The BFAWU is the largest independent trade union in the food sector in the British Isles. The BFAWU works to ensure that employees are secure and safe in their workplace – and that they are paid an equitable wage for the work they do.