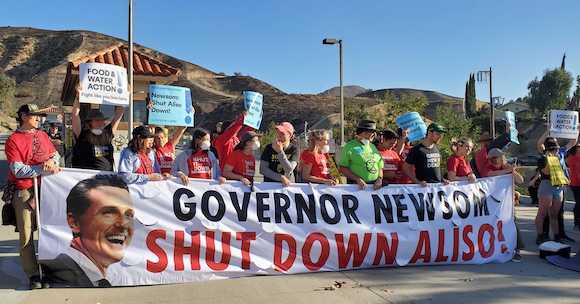 Impacted community leaders and activists are putting their bodies on the line right now outside of the Aliso Canyon gas storage facility to defend their neighbors from its dangers, according to Alexandra Nagy, California Director of Food & Water Action and Food & Water Watch.

Nagy is urging you to show your solidarity by calling Governor Newsom at 877-796-1949 and urging him to permanently shut down the dangerous Aliso Canyon facility immediately!

Yesterday, on the fourth anniversary of the methane blowout at SoCalGas’s Aliso Canyon gas storage facility, community members called on Gov. Newsom to issue an executive order to shut the facility once and for all.

“The 2015 blowout spewed 100,000 metric tons of climate-polluting methane into the atmosphere along with other toxic substances. 25,000 people were forced to leave their homes while SoCalGas took four months to plug the leak. Many still suffer from chronic health problems stemming from the blowout and ongoing leaks,” according to Nagy.

“Last week, flames from the Saddleridge fire entered the facility, underscoring just how dangerous the gas field is, located near homes, schools and businesses. Gov. Newsom has promised to close the facility, but has not yet taken action,” said Nagy.

“Aliso Canyon is an ongoing health crisis and a climate emergency waiting to explode again,” said Nagy. “Just last week, flames entered the facility, leaving a mysterious fire burning in their wake. What more can it possibly take for Governor Newsom to keep his promise and shut down Aliso Canyon? If Governor Newsom doesn't act now, the next disaster will be on his watch.”

Neighbors yesterday rallied outside the facility, as they have every year for the last four years, to mark the anniversary of the blowout that changed their lives. They are there again today.

“The burned-out hills in the gas facility are a perfect backdrop for today’s action, and another warning of the need to permanently shut down the facility,” said Save Porter Ranch President Matt Pakucko. “Add to that: two other fires there since the blowout, the damning revelations from the blowout’s Root Cause Analysis, and the July 2019, 6.4 and 7.1 earthquakes. How many more warnings until the ‘catastrophic loss of life’ that SoCalGas has already cautioned us about happens at this facility?”

Sen. Henry Stern, who represents the area and supports closing the facility, joined the neighbors in solidarity.

“It’s been four years since Aliso Canyon blew and our community still does not have closure they deserve,” Sen. Stern said. “Meanwhile, ratepayers bear the brunt of billions for gas supply shortages in our winters and summers. I appreciate the Governor’s partnership in moving California towards 100% renewable energy, and overhauling DOGGR into the new CalGEM to put public health and the environment first. Now, we need his help to ensure the CPUC doesn’t use rigged numbers in their analysis of a Los Angeles without Aliso, and to fulfill his promise to close the facility once and for all.”

2. When a staff person answers the line, tell them:

"Hi, my name is _____. I'm a California resident calling to urge the governor to protect the health and safety of families that were recently evacuated in North San Fernando Valley and surrounding communities.

Yesterday marks the fourth anniversary of the awful 2015 blowout at the Aliso Canyon gas storage facility and families are still suffering! I urge the governor to use his executive authority to shut down this dangerous facility immediately!"
Add Your Comments
LATEST COMMENTS ABOUT THIS ARTICLE
Listed below are the latest comments about this post.
These comments are submitted anonymously by website visitors.