Newswire
Calendar
Features
Home
Donate
From the Open-Publishing Calendar
From the Open-Publishing Newswire
Indybay Feature
Publish to Newswire
Add an Event
Related Categories: U.S. | Environment & Forest Defense
Activist claims CITES exemption for finished musical instruments may set a bad precedent
by Lynda Carson (tenantsrule [at] yahoo.com)
Wednesday Oct 23rd, 2019 8:17 AM
The handmade guitar made by the author of this story around 34 years ago is partially made of East Indian rosewood and Brazilian rosewood. It would be confiscated by government officials if it was taken across an international border. 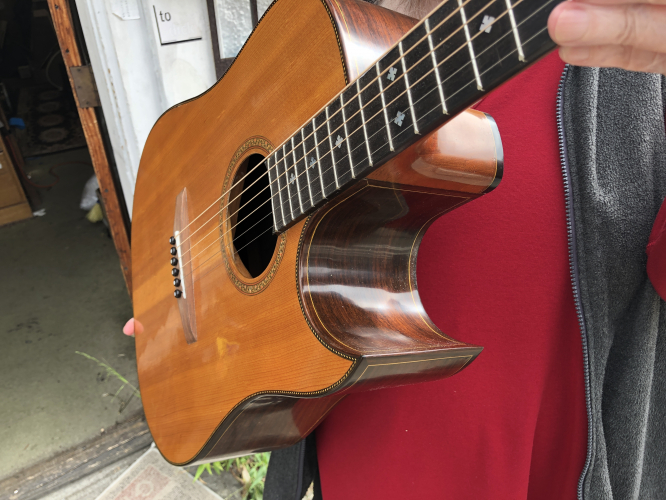 On October 3, 2019, the National Association of Merchants and Musicians (NAMM) reported that the Convention on International Trade in Endangered Species of Wild Fauna and Flora (CITES) gave notice that an exemption for musical instruments from the dalbergia rosewood permitting requirement takes effect on November 26, 2019.

Because of CITES regulations that took effect in January of 2017, musical instruments including guitars made out of East Indian rosewood, Honduran rosewood, and cocobolo (Dalbergia retusa) could be confiscated when crossing international borders, impacting musicians and people shipping stringed instruments around for various reasons.

According to NAMM, “As noted upon the approval of Annotation 15, imports and exports of finished musical instruments, finished parts, and finished accessories will no longer need a CITES permit. The exception applies to all species of dalbergia except Brazilian rosewood, which remains on CITES Appendix I.”

Musicians, stringed instrument makers, and dealers are pleased that a CITES exemption for finished musical instruments is expected to occur soon.

However, according to a report with NPR, environmental activist Lisa Handy, the director of forest campaigns with the Environmental Investigation Agency is concerned. Handy claimed that the exemption was a reluctant compromise for many rosewood source countries.

In a written statement to NPR Lisa Handy wrote, "We remain concerned this could set a bad precedent. It will be even more imperative that the sourcing and manufacturing processes are well-controlled to ensure that rosewood-producing countries, which are struggling to control illegal loggers and trafficking ... receive the international support they need to implement the convention."

Dealers, musicians and instrument makers have tried to get around the CITES regulations, and the Lacey Act through the years, and sometimes they get caught for violating the laws that were meant to protect endangered species.

Recently, 10 very expensive high-end custom built Paul Reid Smith (PRS) guitars were confiscated by the U.S. Fish and Wildlife Service in Anchorage, Alaska, as they were being shipped illegally by a dealer (not PRS) to Hong Kong. The guitars were in part made of Brazilian rosewood, a protected species, and were declared as clothing when they were confiscated according to the U.S. Fish and Wildlife Service.

Reportedly, members of the Anchorage School District were more than pleasantly delighted that the U.S. Fish and Wildlife Service donated the confiscated Paul Reid Smith (PRS) guitars to their school district.

According to the Anchorage Daily News recently, the 10 confiscated PRS custom built handmade guitars were valued at around $54,000. Reportedly, Bruce Wood, the fine arts director for the Anchorage School District was shocked, totally shocked to discover that the U.S. Fish and Wildlife Service donated the very expensive confiscated PRS guitars that could be used by students in the school district.

Additionally back in 2012, Gibson guitars was nailed by the Department of Justice (DOJ) for violating the Lacey Act, and Gibson agreed to pay a penalty amount of $300,000, in addition to a community service payment of $50,000 to the National Fish and Wildlife Foundation.

Reportedly, a few of Gibson’s guitar factories were raided twice by the feds, and around 4 years after the first raid occurred Gibson struck back by issuing a new guitar called the Government Series ll Les Paul guitar with wood that was confiscated during the raids.

However, when considering that finished musical instruments that are made with Brazilian rosewood will still be confiscated after November 26, 2019 if they were taken across an international border, it just might be a good idea to avoid doing so.

>>>>>>
>>>>>>
US teenagers have bagpipes seized at Canada border after competition