Add an Event
Newswire
Calendar
Features
Home
Donate
From the Open-Publishing Calendar
From the Open-Publishing Newswire
Indybay Feature
Publish to Newswire
Add an Event
Related Categories: California | Central Valley | Environment & Forest Defense | Racial Justice
Native American and Salmon Activists asks Governor, AG to Stand Against Trump Water Plan
by Save California Salmon
Tuesday Oct 22nd, 2019 1:04 PM
Today the Trump administration released the new Biological Opinion for Long Term Operations for the Central Valley Water Project. This opinion is related to a new operation plan from the Bureau of Reclamation that prioritizes water deliveries to large Central Valley farms and maximizes power generation from the state’s dams at the expense of water quality and salmon. The Opinion replaces an earlier suppressed Biological Opinion that jeopardizes every Endangered Species Act listed fish within the Bay Delta and all of its tributaries. 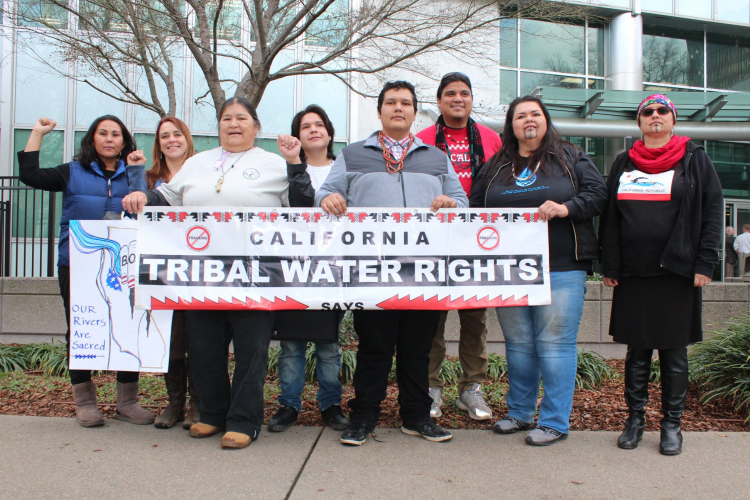 original image (1944x1296)
Even though the new water project operations also impacts the Trinity River, the largest tributary of the Klamath River, this Biological Opinion does not disclose impacts or solutions for ailing Klamath-Trinity River salmon.

“This fisheries review replaces the one that concluded Trump’s Water Plan to maximize water deliveries for Central Valley agriculture jeopardizes every ESA listed fish species in the Delta and San Joaquin and Sacramento River systems. The plan could also harm the state’s drinking water supply and harm Trinity and Lower Klamath River Salmon.” said Morning Star Gali, the Tribal Water Organizer from Save California Salmon. “ Last month on California Native American Day the governor vetoed legislation (SB 1)that could have helped the state protect our salmon from this plan. This veto came just months after he apologized for the state’s treatment of native people. We need more than lip service to California’s Tribal people’s and our declining salmon populations. Governor Newsom campaigned on fighting the Trump administration's environmental rollbacks. We need him to walk his talk and fight for our salmon by filing a lawsuit against this bad plan for California’s environment .”

Tom Stokely with Save California Salmon said, “Attorney General Becerra has a great track record litigating against Trump’s environmental rollbacks. We encourage him to pursue litigation against this Biological Opinion that wrongly concludes no impacts to California’s water quality and fisheries. Governor Newsom’s veto of SB 1 was extremely disappointing, but he has a golden opportunity to redeem himself by joining Becerra in litigating against this latest assault on California’s environment.”

Save California Salmon is dedicated to restoring rivers though restoring flows and salmon habitat, removing dams, and improving water quality throughout Northern California. We are also dedicated to fighting new threats to our rivers such as new dams, diversions and pipelines and empowering people to fight for rivers and salmon. We are dedicated to protecting and restoring the salmon Klamath, Trinity, Sacramento, Eel, and Smith Rivers. See https://www.californiasalmon.org/about and https://www.facebook.com/SaveCaliforniaSalmon/
http://californiasalmon.org
§Tribal members from the Klamath and Pit Rivers at a rally against the Trump water plan.
by Save California Salmon Tuesday Oct 22nd, 2019 1:04 PM 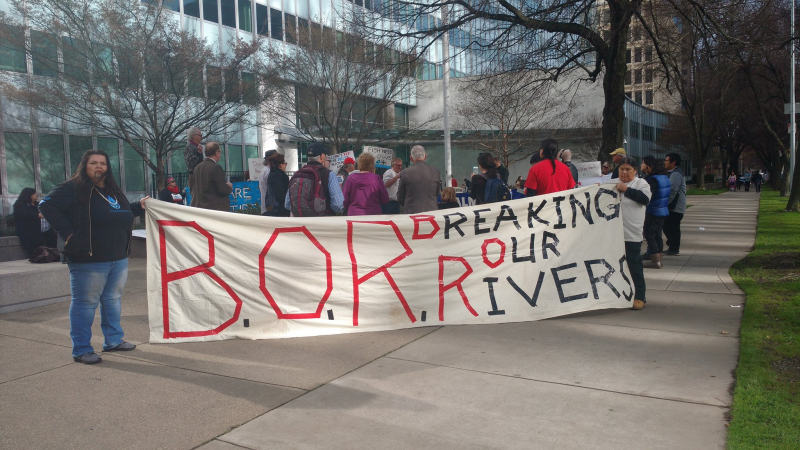 original image (2048x1152)
The first photo was taken by reporter Dan Bacher.
http://californiasalmon.org
Add Your Comments
LATEST COMMENTS ABOUT THIS ARTICLE
Listed below are the latest comments about this post.
These comments are submitted anonymously by website visitors.