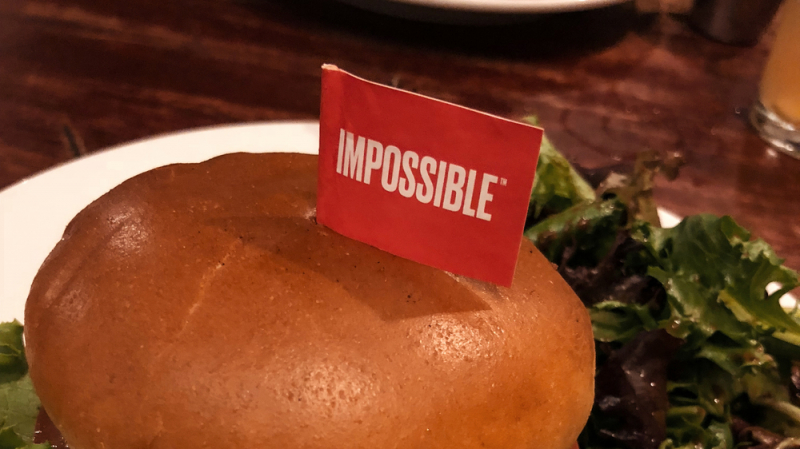 original image (1000x562)
Washington, D.C., October 21, 2019 — Center for Food Safety (CFS) is calling on the Food & Drug Administration (FDA) to recall the uncooked Impossible Burgers currently being sold at several grocery stores around the country. In a letter to the agency, the consumer advocacy group notes that raw Impossible Burgers are being sold illegally even though there is no regulation in effect to allow such sales as required under federal law. The grocery stores that are currently selling uncooked Impossible Burgers include Wegmans, Gelson's, and Fairway Market.

In order to manufacture its genetically engineered (GE) Impossible Burgers to appear to "bleed" like real meat, Impossible Foods uses synthetic biology (synbio) to extract DNA from the roots of soy plants—where a small amount of soy leghemoglobin or "heme" is produced—and inserts the DNA into genetically engineered yeast where it is fermented to mass-produce this engineered heme. It is the heme that gives the GE Impossible Burger its reddish-brown color. This new heme is also why Impossible Foods needed to seek FDA's approval to use their heme as a color additive before it could sell the uncooked GE burgers in grocery stores.

In August, FDA approved Impossible Foods' petition to list heme as a color additive very quickly. CFS filed objections to that approval in September, which legally prevent the regulation from going into effect and prohibit any sales of the product until those objections are resolved. The advocacy group also launched an action alert to encourage consumers to urge FDA to revoke its rapid approval of this heme until independent safety testing is conducted and made available to the public.

"Without valid FDA approval in place, it is unlawful to sell uncooked Impossible Burgers at retail stores," said Ryan Talbott, Center for Food Safety staff attorney. "The law is clear that when FDA receives an objection to a proposed color additive, FDA must hold approval of its use while it reviews the objection, in order to ensure that it is safe for human consumption. FDA should issue a recall telling retailers to remove uncooked Impossible Burgers from their shelves immediately."

The objections filed by CFS raised several issues about FDA's safety review of this genetically engineered heme for use as a color additive in genetically engineered Impossible Burgers. The group noted that in order to be approved as a color additive, there must be "convincing evidence that establishes with reasonable certainty that no harm will result from the intended use" of the heme used in GE Impossible Burgers. CFS' objection emphasizes that through the synbio process, new compounds—including proteins—may be created that have never been consumed by humans before, and thus the impact of these compounds on our gut and our overall health is unknown.

"This is the first time that people have consumed synbio heme," said Center for Food Safety's policy director, Jaydee Hanson. "FDA should have required additional testing to make sure that this new substance does not cause allergic reactions in people, but the agency failed to do so."

While CFS avidly supports plant-based eating, the lack of transparency in getting the GE Impossible Burger in restaurants and retail stores highlights a troubling deregulatory trend which prioritizes corporate profit over public health and safety.