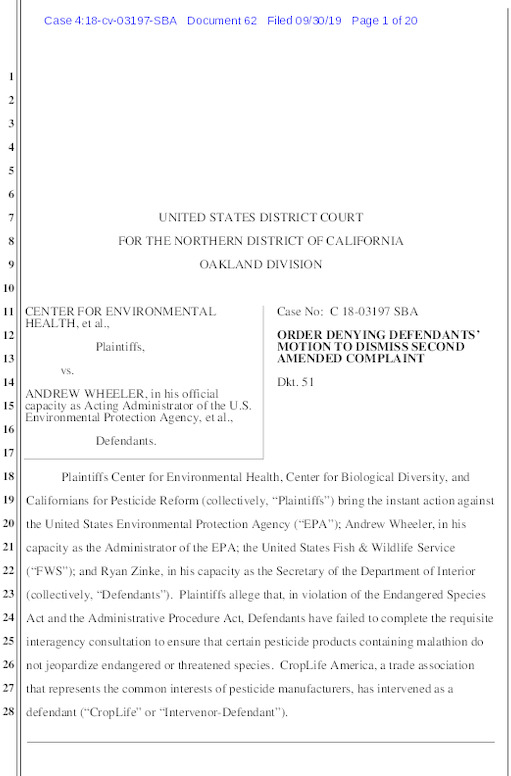 Download PDF (96.8KB)
Malathion is linked to developmental disorders in children and has been found by the World Health Organization to be “probably carcinogenic to humans.” EPA scientists have determined that the insecticide, manufactured by Dow Chemical, poses widespread risks to protected plants and animals. The agency, though, has never taken steps to limit those harms.

The U.S. Fish and Wildlife Service has determined that malathion is jeopardizing the continued existence of 1,284 threated and endangered species. And the National Marine Fisheries Service issued a biological opinion concluding malathian jeopardizes 38 threatened and endangered species, including all protected species of Pacific salmon and Southern Resident killer whales.

As part of a legal settlement, government scientists were set to issue a final opinion by the end of 2017 identifying ways to safeguard endangered species from malathion.

But after the Trump administration took office, Dow officials asked the EPA and other federal agencies to abandon years of work assessing the harms of several pesticides, including malathion. Seven months later the EPA and Fish and Wildlife Service indefinitely suspended the malathion assessment.

“Scientists have known about malathion’s hazards to fish, birds and frogs for decades,” said Caroline Cox, research director at the Center for Environmental Health. “We need action now.”

Around 1 million pounds of malathion are used nationwide annually. The neurotoxin is part of the dangerous class of organophosphate pesticides used as a nerve agent in chemical warfare. They have been linked to Gulf War syndrome, which has symptoms that include fatigue, headaches, skin problems and breathing disorders.

Today’s ruling is part of a lawsuit filed last year by the Center for Biological Diversity, Center for Environmental Health and Californians for Pesticide Reform in the U.S. District Court for the Northern District of California. It alleges that the EPA and the U.S. Fish and Wildlife Service have failed to complete the legally required steps to fully assess and limit the dangers of the neurotoxin malathion.

For decades the EPA refused to comply with its legal mandate to protect endangered species from the impacts of pesticides. But following a two-year review by the National Academy of Sciences in 2013, the federal government initiated a highly public and transparent process to analyze the impacts of three insecticides, including malathion.

During this process Dow provided extensive comments urging the agencies to abandon the legally required effort. In January 2017 Dow was one of three companies that donated $1 million to Trump’s inauguration.

Upon requests from pesticide manufacturers, high-level Trump administration officials refused to allow the release of public documents relating to the dangers of malathion and two other organophosphates. Portions of those documents were obtained by the Center for Biological Diversity via Freedom of Information Act litigation. An account of the administration’s push to block their release was published in The New York Times.

The Center for Environmental Health works with parents, communities, businesses, workers, and government to protect children and families from toxic chemicals in homes, workplaces, schools, and neighborhoods. 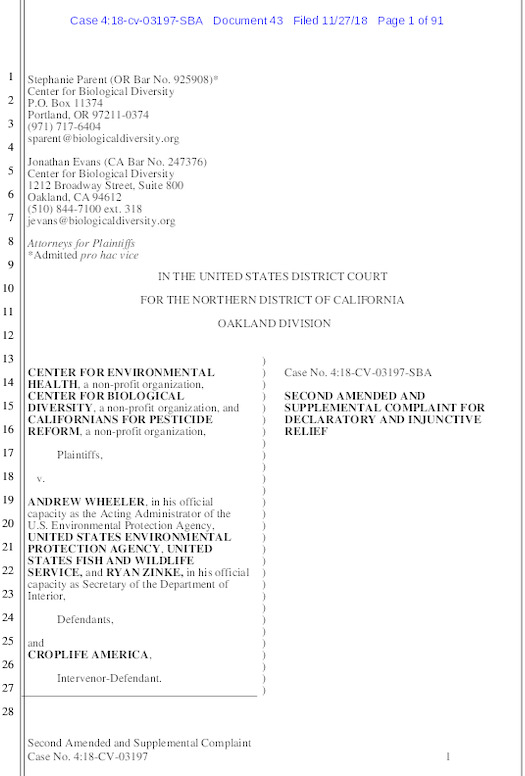 Download PDF (1015.5KB)
https://www.biologicaldiversity.org/
Add Your Comments
Support Independent Media
We are 100% volunteer and depend on your participation to sustain our efforts!