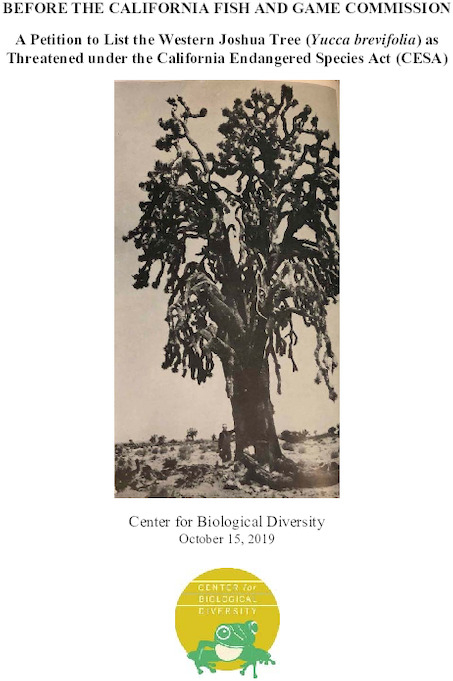 Download PDF (3.4MB)
JOSHUA TREE, Calif., October 15, 2019 — The Center for Biological Diversity petitioned the California Fish and Game Commission today to protect western Joshua trees under the California Endangered Species Act. The trees are threatened by climate change and habitat destruction from urban sprawl and other development in their Mojave Desert home.

“The California Endangered Species Act may be the only hope for saving these iconic symbols of the Mojave Desert,” said Brendan Cummings, the Center’s conservation director and a Joshua Tree resident. “Joshua trees are uprooted or bulldozed on a daily basis to make way for roads, strip malls and vacation rentals right up to the borders of our national parks. If these beautiful plants are to have any hope of surviving the difficult decades ahead, we have to stop killing them.”

Recent studies show that Joshua trees are dying off because of hotter, drier conditions, with very few younger trees becoming established. Even greater changes are projected over the coming decades. Scientists earlier this year projected that the Joshua tree will be largely gone from its namesake national park by the end of the century.

Earlier this year the Trump administration denied federal protection to the species.

“California needs to ensure these spectacular trees remain part of our healthy deserts for decades to come,” Cummings said. “The Trump administration is going in the opposite direction on climate change and abdicating its responsibility to save Joshua trees and hundreds of other species. The state has to step up for these trees.”

Climate change could wipe out western Joshua trees, which already are failing to reproduce at drier, lower elevations. Prolonged droughts are projected to be more frequent and intense over the coming decades, shrinking the species’ range and leading to more tree deaths. Higher elevations, where Joshua trees might survive increasing temperatures and drying conditions, are at risk of fire due to invasive non-native grasses.

The western Joshua tree is also threatened by habitat loss and degradation. Outside of Joshua Tree National Park, off-road vehicle use, cattle grazing, powerlines and pipelines and large-scale energy projects are destroying habitat. Approximately 40 percent of the western Joshua tree’s range in California is on private land, with only a tiny fraction protected from development. Current projections show that virtually all of this habitat will be lost without stronger legal protections for the trees.

The Joshua tree has recently been recognized as composed of two distinct species, the western Joshua tree (Yucca brevifolia) and the eastern Joshua tree (Y. jaegeriana). The two species occupy different areas of the desert, are genetically and morphologically distinguishable, and have different pollinating moths.

Today’s petition seeks protection of the western species. The western Joshua tree has a boomerang-shaped range stretching from Joshua Tree National Park westward along the northern slopes of the San Bernardino and San Gabriel Mountains, through the Antelope Valley, northward along the eastern flanks of the southern Sierra Nevada and eastward to the edges of Death Valley National Park and into Nevada.

The eastern Joshua tree’s range in California is centered in the Mojave National Preserve and extends eastward into Nevada, Arizona and Utah.

Under the California Endangered Species Act, the California Department of Fish and Wildlife has three months to make an initial recommendation to the Fish and Game Commission, which will then vote on the petition at a public hearing early next year.