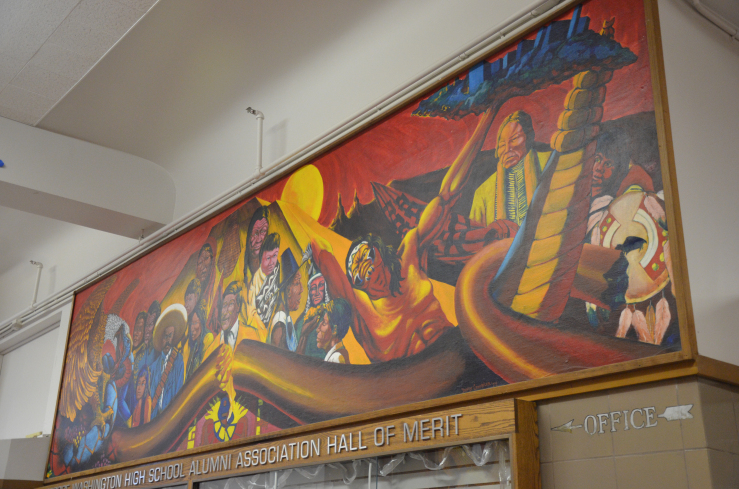 Panel discussion sponsored by the Art, Place, and Public Studies program at San Francisco Art Institute.
A decision earlier this year by the San Francisco Unified School District Board to “paint down” the Victor Arnautoff murals of the life of George Washington at the public high school of the same name sparked local, national and international debate, raising anew questions of how history should be publicly represented, what public(s) art means to address, and when and how dominant historical narratives should be reinterrogated by elaboration, augmentation or erasure. This panel of artists and scholars moves beyond mere controversy to speak to the urgent need for deep critical discussion about how artists engage in broader practices of historical remembrance, struggles for social justice and ongoing social debate regarding the definition of the “public” in the 21st century. How do artists work with and represent particular communities and histories? How can art activate public space as pedagogical space, creating convening places for empowered teachers and learners? Beginning to answer these questions involves delving into the multiple meanings of art in the public sphere, building on concepts of the ‘theatricality of power’ in representational practices, cultural imaginaries, and built environments, and expanding the ways that artists as activists might intervene in the dominant narratives that structure our relationships to one another.

San Francisco Art Institute occupies a special place in history of public art-making—not only for the historic murals by Diego Rivera, Frederick E. Olmsted and others on the Chestnut Street campus but for the ongoing engagement of SFAI artists, teachers and alumnx in contemporary questions of making art in public. The new Art, Place, and Public Studies program at SFAI offers a unique opportunity for students desiring to further their investigations of art in the public sphere—creatively, critically and curatorially.
Panel Co-Chairs: Robin Balliger and Jeannene Przyblyski
Panelists: Robin Balliger, Cristóbal Martínez, Refa One, and Jeannene Pzyblyski

Robin Balliger, PhD, is Chair of Art, Place, and Public Studies and Liberal Arts at the San Francisco Art Institute. She earned her PhD in anthropology at Stanford and her research in Trinidad focused on popular culture in the context of neoliberal social and spatial transformations. Balliger’s current project is on Oakland, particularly on arts, culture, and racial politics in the context of urban restructuring. In 2019 she was invited to present her work at the Max Planck Institute in Germany. Balliger has received fellowships from Fulbright, MacArthur Foundation, and she was awarded the Textor Award for Outstanding Anthropological Creativity. Her publications appear in The Global Resistance Reader, Trinidad Carnival: The Cultural Politics of a Transnational Festival, Media Fields Journal, and Race, Poverty, and the Environment. Formerly, Balliger was a musician and founding member of Komotion International, a legendary collective performance space that exemplified the radical politics and creativity of San Francisco’s Mission District.

Dewey Crumpler is Associate Professor of Painting at the San Francisco Art Institute. His current work examines issues of globalization and cultural co-modification through the integration of digital imagery, video and traditional painting techniques. His work has been exhibited nationally and internationally, and is featured in the permanent collections of the Oakland Museum of California; the Triton Museum of Art, Santa Clara, California; and the California African American Museum, Los Angeles. Crumpler has received a Flintridge Foundation award, National Endowment for the Arts Fellowship Grant, and the Fleishhacker Foundation, Eureka Fellowship. A digital image of his murals has been included in the 2017 Tate Modern’s exhibition “Soul of a Nation” in London, England.

Cristóbal Martínez, PhD, is an artist in Postcommodity and Chair of Art and Technology at the San Francisco Art Institute. In his work, Martínez positions metaphors that mediate complexity at sites of dromological, spatial, social, cultural, political, ecological, and economic anxiety. By interrogating our human behaviors within these contexts, his art reveals the complex and often incongruent nature of our memories, behaviors, beliefs, values, assumptions, choices, and relationships.

Refa One, an Oakland California native, has been instrumental in the development of the innovative, unorthodox genre of art known as “Aerosol Art” (Graffiti Art/Style Writing) for well over two decades. Immersed in HipHop culture as a youth, the walls of urban structures became his canvas. Refa's refined HipHop calligraphy speaks to a legacy of style writing, a cultural tradition born from the NYC subway painting movement. A lifetime of involvement in HipHop culture via the Universal Zulu Nation combined with his radical political awareness, has translated into a successful career as a HipHop calligrapher, muralist, illustrator, activist, and educator. Refa’s design aesthetic promotes African culture as a vehicle for radical political and social change. His pieces are maps of vision and reflection that capture the intellectual value and heritage of the HipHop vernacular. His work has been featured nationally and in various countries throughout Europe and the African continent. Refa One is currently the director of AeroSoul, an international organization of spray can artists from the African Diaspora.

Jeannene Przyblyski, PhD, is an artist and historian, working on questions of people, place and representational regimes, particularly in the U.S. and China. Przyblyski has published widely on photography, media, visual culture and urbanism, and produced creative public artworks that make visible the contested landscapes all around us. Her most recent project, Some Place Chronicles, was commissioned by the Los Angeles County Arts Commission to map in bilingual artist’s books the history and culture of LA’s unincorporated areas. Przyblyski was a San Francisco Arts Commissioner from 2004-2009 and has held positions as Dean of Academic Affairs at San Francisco Art Institute and as Provost of California Institute of the Arts (CalArts). She is Distinguished Visiting Professor at the SFAI.


Images (left to right): (1) Dewey Crumpler, detail from Multi-Ethnic Heritage, a triptych of murals completed in 1974 at George Washington High School as a response to the controversial “Life of Washington” mural. Photo by Amanda Law; (2) Postcommodity, With Each Incentive, 2019. Bluhm Family Terrace, Art Institute of Chicago; Chicago, Illinois. Concrete, Cinder Block, and Steel Rebar. Installation view. Courtesy of the Art Institute of Chicago; (3) Refa One, detail of the newly unveiled Long Live Oscar Grant mural at Fruitvale BART Station in Oakland, California. Courtesy the artist.
http://sfai.edu/whose-public-art
Add Your Comments
Support Independent Media
We are 100% volunteer and depend on your participation to sustain our efforts!