Add an Event
Newswire
Calendar
Features
Home
Donate
From the Open-Publishing Calendar
From the Open-Publishing Newswire
Indybay Feature
Publish to Newswire
Add an Event
Related Categories: Santa Cruz Indymedia | Government & Elections
Pushing Past the Censure/Recall Distraction at City Council
by Robert Norse (rnorse3 [at] hotmail.com)
Wednesday Oct 9th, 2019 9:53 AM
At the 10-8 City Council meeting, Mayor Watkins gave staff the usual expansive and unnecessary presentation time for prior items. She then eliminated group presentation time on the pointlessly returned censure of Krohn/Glover item. Initially refusing again to recognize a Councilmember, she again tried to hide behind the City Attorney as back-up. Failing this she cut back public comment time severely, allowing a special favored group presentation by the discredited City Commission for the Prevention of Violence to Women. I prepared this speech of which I was only permitted to read part of at the meeting: 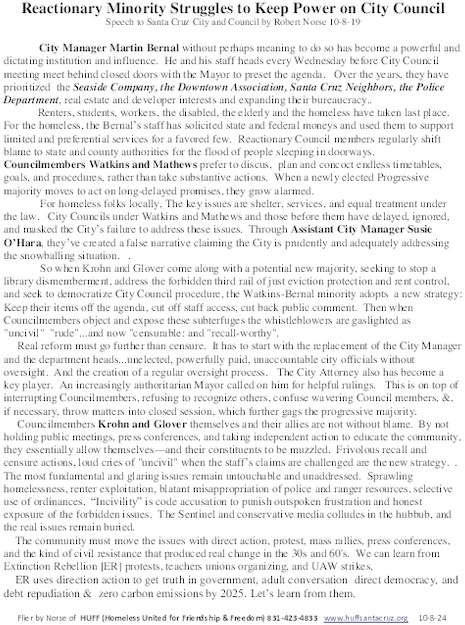 Download PDF (685.6KB)
Instead of booking the Civic Auditorium for the Council meetings expected overflow crowd, Watkins insisted (again) on using the crowded Council chambers. This resulted in further delay as people were hustled out of Council chambers, prompting angry response from former Councilmember Ed Porter who denounced the police directions as "shameful".

Watkins several times interrupted speakers to shush audience comment. Even though speakers seemed to have no problem with the occasional public voice. In so doing, Watkins took up additional time and embarrassed the proceedings with her usual inappropriate authoritarian treatment to the proceedings.

The entire issue ended hours later, as was expected, with a 4-3 vote rejecting the censure proposal--which had not been recommended by the Rose report in the first place.

Oral Communication was subsequently cut back to a minute and a half, then one minute.

A line of tenant supporters at Oral Communications brought up the pending winter eviction of Section 8 elders and disabled folks in the Lower Ocean neighborhood. In response, Councilmember Glover made an emergency motion to put rent control/just eviction back on the next agenda. Councilmember Krohn initially second the motion, but withdrew the second when he learned it was intended to protect all tenants, not just the Lower Ocean folks. Brown and Cummings, supposedly tenant advocates, remained conspicuously silent, and Glover's motion died for lack of a second.

This cowardly and useless strategy of going hat in hand to Mayor Watkins to put items on the agenda instead of installing the items with a 4-3 vote is sad. It seems to reflect the advise of "Progressive advisers" that the Councilmembers walk on eggshells so as not to offend Matthew's more rabid recall supporters.

What need to be done is to return to real issues, baldly, clearly, and repeatedly stated. Loudly, as necessary,. And by those of outside the chambers.

Wasting time with the ridiculous recall/censure discussion, talking of "reconciliation:" and "bringing the community together" is simply blind to the reality: There is a clear power division in this community between predatory commercial, real estate, and bureaucratic interests and those of renters, workers, students, elderly, and homeless folks. Recognizing that it is a power struggle that must be won is vital.

As I mention in the speech I was unable to complete, a direct action crisis approach is being taken all over the country (and indeed the world) by various movements and needs to be repeated here.
Add Your Comments
LATEST COMMENTS ABOUT THIS ARTICLE
Listed below are the latest comments about this post.
These comments are submitted anonymously by website visitors.