Monday saw another day of protests, with highway blockades, being the main tactic. Protests continued in major cities, especially Monday night. A national strike has been called for Wednesday. 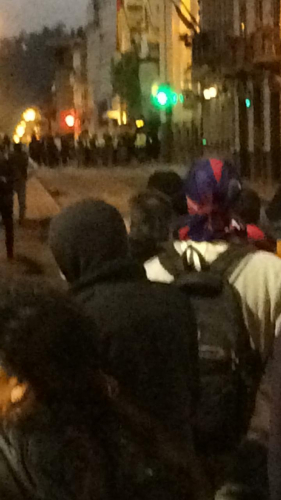 original image (720x1280)
CUENCA, ECUADOR - Nationwide protests in Ecuador against economic measures decreed by President Lenin Moreno continued on Monday. The center of gravity of the protests has shifted from transit strikes and protests in the major cities to road blockades in areas with large indigenous populations. A nationwide strike has been called for Wednesday.

Road blockades on major highways throughout the country impeded traffic to many cities, including Quito, Guayaquil, Cuenca, and many others. Virtually all goods and people travel by road in Ecuador. There are no freight or commuter trains. The highway blockades are having a devastating effect on travel and commerce. The road blockades are being led by indigenous peoples, compesinos, and workers.

The protests were sparked by a decree by President Moreno issued last Wednesday that ended government subsidies for fuel. As a result, the price of regular gasoline increased overnight by 25 percent; and the price of diesel increased over 120 percent. All goods travel within Ecuador by diesel powered trucks, meaning the price of all goods is expected to increase significantly.

A federation of indigenous groups, CONAEI, issued a statement in response to President Moreno's declaration of a state of emergency, by declaring a state of emergency on indigenous lands. “Any military or police officer who enters indigenous land without permission will be detained,” read the CONAIE statement. Telesur is reporting that there have been officers detained by indigenous forces, but this has not been confirmed by other sources..The CONAIE statement condemned those who have taken advantage of the protests to engage in looting. CONAEI said it would deploy its own security to identify and stop those doing so. There have been numerous reports of looting, particularly in Guayaquil.

Meanwhile, the government security forces, police and the armed forces, have moved into the major cities. The cities, including the nation's capitol, Quito, had been paralyzed by a transit strike by taxi and bus drivers. Most metropolitan taxi and bus service returned, though bus service between cities was blocked by highway blockades.

Tanks have reportedly rolled into Quito and reported to now flank the Presidential palace.

The cities, especially Quito, appear set to be the next stage for the protests. "More than 20,000 indigenous people will be arriving in Quito," CONAIE president Jaime Vargas told reporters, according to a report by Agence France Presse. “On Wednesday, we will take Quito,” said Vargas.

Huge protests were reported in Quito over night.

In response, the government announced it would move its operations out of the capital to Guayaquil, “to be closer to the armed forces.” The military and business community have backed President Moreno, but he is very unpopular with most of the population, A poll by Perfiles de Opinion taken in March found that Pres. Moreno's popularity has plummeted to less than 27 percent, and that only 17 percent trust the President's word.

President Moreno issued a video statement yesterday in which he said the protests were, “not an expression of social discontent.” He blamed supporters of ex-President Rafael Correa and criminals for the protests. The government has provided no evidence to support this claim, though it's clear that many of Correa's supporters, which compromise at least 20 percent of the population, are participating in the protests. However the indigenous protests have been led by groups, including CONAIE and the Pachakutik party, that are opposed to Correa and his movement, which is called Citizen's Revolution.

A call for a nationwide strike has been issued for Wednesday. It is not clear at this moment which unions, if any, will endorse the strike. It's been reported that the national leaderships of the taxi union and the truck drivers union have reached some agreement with the government to offset their additional fuel costs. They have called off their nationwide transit strike that paralyzed the country last Thursday and Friday. There are also reports of membership dissatisfaction calling off the strikes. In the city of Imbabura, truck drivers announced that they would defy the national union's decision and will continue to strike.

Monday morning began with relative normality in Cuenca, with buses running and taxis on the street. Many businesses in downtown Cuenca remained closed. Buses stopped running mid-afternoon. The main square, Parque Calderon, remained fenced off to prevent protesters from gathering there. Roads entering into Cuenca from surrounding areas were largely closed due to highway blockades.

A large demonstration materialized around 6:00pm in Plaza San Blas. Protesters moved towards Parque Calderon, but were confronted by police, including some on horseback. A lot of teargas was used, which dispersed the protesters to numerous other streets, where they continued to protest. There were no major incidents of looting reported in Cuenca.

Spirits were high among the protesters yesterday. While the protests continue to focus on the fuel price increases, many protesters also called for President Moreno to resign. A number expressed confidence that he will.

Three Presidents of Ecuador were forced to resign by mass protests between 1997 and 2005. Many of the forces leading the current protests are the same ones that forced those resignations.

Earlier in the afternoon, an older man interviewed near Parque Calderon, blamed the government for the crisis, and said, “I hope that on Wednesday Moreno is gone.”
§Scattered protests on side streets in Cuenca, Ecuador.
by Harvey Goldberg Tuesday Oct 8th, 2019 12:50 PM 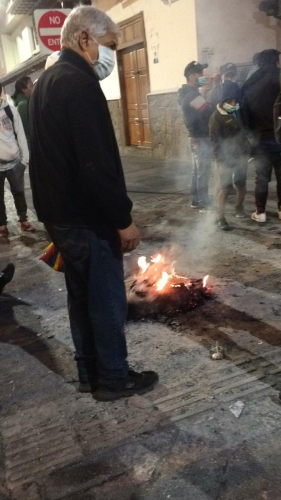 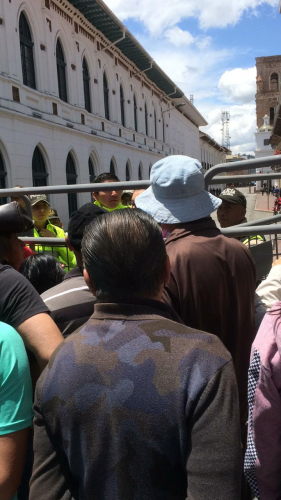 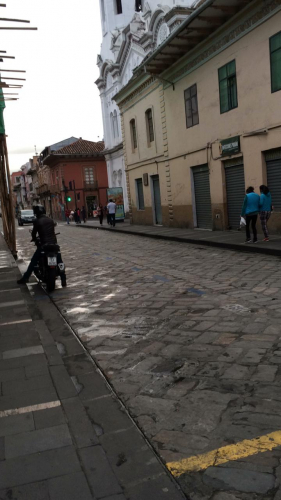 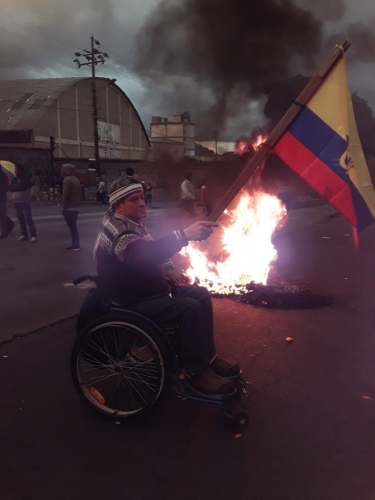 original image (720x960)
Alfon E. Morales, a disabled activist in Quito, Ecuador, posted this photo on his Facebook page, along with the following poem.
"My Granny said to me... as long as you own your reason but with the truth... you have to listen and you will be able to show yourself and the sun that you are free and layers of fulfilling ideals... (Purification Caguana). Long live the ecuad ♿️ r...!"
Published with permission.