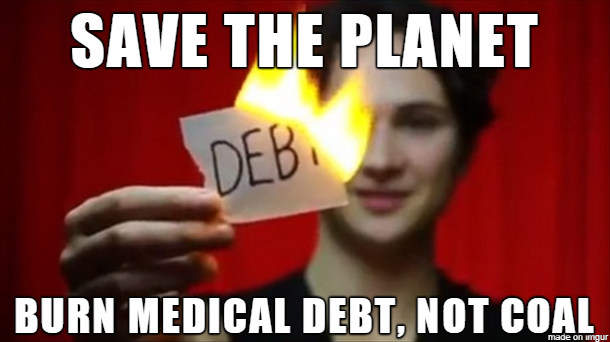 We did it. Signed, sealed and delivered, letters were received in these last weeks by more than 700 Bay Area residents informing them that

... you no longer owe the balance on the debt referenced above to the above provider. You no longer have any obligation to pay this debt to anyone, at any future time. Because this debt has been canceled as a gift by a 501(c)(3) charity, you do not owe any taxes on the "cancellation of debt" income.

Strike Debt Bay Area orchestrated a campaign that, with partner Harvey Bilik, raised more than $15,000. National charity RIP Medical Debt, which hosted the fundraiser, then used the funds to buy up defaulted medical debt for less than a penny on the dollar in Alameda, Contra Costa, Marin and San Francisco counties in California.

Here's the totals as reported to us by RIP Medical Debt:

Thanks to the all who responded to our requests for donations!

We are glad we could help 753 people stop the harassing phone calls, the anxiety and, for some, the guilt. We only wish we didn't need to have done it... All existing medical debt should be wiped away, and a system put in place yesterday to make sure that no one need incur such debt in the future.

As Vox put it recently

Medical debt is a serious problem in the United States. Here are the raw statistics: - The Consumer Financial Protection Bureau reported in 2014 that 43 million Americans had unpaid medical debts on their credit reports.
- Americans accrued an estimated $88 billion in medical debt in 2018, according to a study by Gallup and the nonprofit group West Health.
- Nearly half of Americans fear a major medical event could lead to their bankruptcy, Gallup found.
- One in four people said that sometime in the past year they had skipped medical treatment because of concerns about cost.

We will continue to wish.  RIP Medical Debt, through its own donations and through campaigns across the country like ours, is getting close to eliminating a cool $1,000,000,000 in defaulted medical debt, an astounding number, except when compared to the total medical debt in the US, much of which is not (or not yet...) defaulted and people are struggling to pay off - often sacrificing their other needs to do so.

It's time for radical change.

For more information see our Canceling Big Debts with Small Gifts FAQ, the RIP Medical Debt website, and the idea that started this all back in 2012, the Rolling Jubilee.

http://strike-debt-bay-area.tumblr.com/
Add Your Comments
LATEST COMMENTS ABOUT THIS ARTICLE
Listed below are the latest comments about this post.
These comments are submitted anonymously by website visitors.